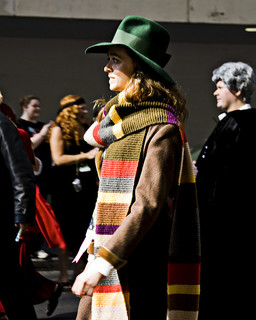 There’s nothing to debate: the next Doctor cannot be white and male

So by now, even if you’re not a member of the fandom, you’ve probably heard that Matt Smith, aka the eleventh Doctor Who, will leave the smash hit TV show later this year. Some fans are weeping into their Cyberman voice-changing helmets, others breathing a sigh of relief. But all are united in a storm of speculation over which actor will be selected to take up the role next.

Checking out the betting odds, you’ll see familiar faces. Paterson Joseph was tipped for the role last time around, as was Chiwetel Ejiofor. It would be extremely exciting to finally have a Doctor who isn’t white – the show’s general lack of lead characters of colour had begun to get a bit embarrassing in the seasons before Martha came along, and fans have been speculating about the possibility of a black Doctor since David Tennant left the role in 2008. Unfortunately, however, die-hards who insist that “the Doctor is a white British male and always will be” appear out of the woodwork every time the job opens up, and frankly, their opinions are becoming embarrassing.

For a start, there is very little of substance in the Doctor Who canon that suggests the Doctor couldn’t regenerate into non-white or non-male body. Interestingly, many fanboys (and the odd fangirl) seem pretty OK with the idea of a Doctor of colour… but a female Doctor? Absolutely not – though many don’t specify a reason. Probably because there is no reason: thanks to Romana, we know for sure that “Time Ladies” (though let’s please not make that term a thing) can exist. The show has featured companions of both genders ever since the very first season, too. Even the grand old Daily Mail – who just published a piece entitled “Who should be the next Doctor? ANYONE but a woman!” – can’t think of a real reason why Matt’s Smith’s replacement shouldn’t be female. Their argument – so you don’t have to give them the satisfaction of a pageview – is that the Doctor provides a “rare” positive, non-violent role model for young boys. Apparently in Daily Mail land, the preservation of this straw-Doctor is far more important than giving young girls the message that they don’t just have to settle for the role of side-kick.

In fact, the whole positive role model thing is one of the biggest reasons why the new Doctor absolutely should be a woman. The show has a massive female fan-base – in fact, I believe Doctor Who is one of the best examples of a science fiction show that proves the genre is not just for blokes. As Lucy Pegg pointed out here at the F Word when new companion Clara came along, the Steven Moffat Doctor Who has been kind of hit-and-miss in its depiction of strong female characters. Since the show’s 2005 resurrection, the female companion’s storyline has always had a(n unrequited) romantic element, with the exception of Catherine Tate’s wonderful Donna. Writing every female protagonist as someone’s love interest in this day and age? Isn’t this show supposed to be ground-breaking?

Which brings me to the most obvious reason why the next Doctor surely can’t be white and male yet again: this show is about to turn 50. Star Trek had successfully launched series with a black captain and then a female captain before it was 30. The X Files understood that a science fiction show could have a strong female protagonist way back in 1993. Doctor Who‘s insistence on always casting white men, especially given that the role is that of a centuries-old, shape-shifting, rules-of-physics-bending alien, is making it look – pardon the pun – rather behind the times.

Sure, it would be easier for all concerned if the Doctor just regenerated yet again into some slightly different version of the wacky-but-troubled thirtyish white guy he’s been ever since Paul McGann. But that’s yet another reason to buck the trend. If there’s one thing Doctor Who loves, it’s the unexpected twist, the unusual story arc, the outrageous and daring plan. Steven Moffat has his very own “this sounds absurd, but it just might work” moment – you know, the kind Matt Smith’s Doctor absolutely relishes – staring him right in the face. When asked about the possibility of a non-white and/or non-male Doctor at the Edinburgh TV Festival last year, Moffat’s reply was, “The more often it is talked about, the more likely it is to happen someday.” Well, right now it feels like the whole internet is talking about this particular issue, whether in hope or condemnation. This show has its own time machine, for goodness’ sake: surely it can make “someday” happen now, and join us in the 21st century?

Image shows a woman cosplaying as the Fourth Doctor (green hat, long stripey scarf). Used under a Creative Commons licence, with thanks to Cayusa.