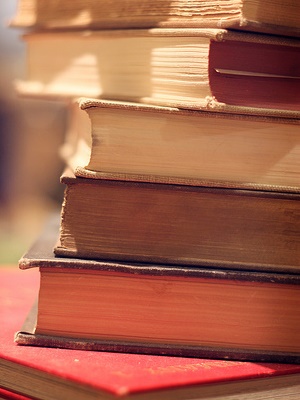 By Carmen Hoang. Carmen is a University of Sheffield student. Her favourite show is Stargate SG-1, she’s spent the last year travelling around Asia and she pronounces ‘th’ as ‘f’.

In a conversation with a friend I found it worrying that I couldn’t place my favourite book written by a woman. It wasn’t that I hadn’t read many great books by women, I just couldn’t choose one I considered a “favourite”. Afterwards, I thought hard about the books I’d loved when I was young and – in true puberty fashion – trying to find myself; the books that were either written by women or portrayed their female characters as agents in their own right. And there were many. A lot more than those I mention below.

Here is a list of eight books that I liked and feel to be a little more accessible for 16-year-olds than, say, Jane Eyre or The Feminine Mystique (though both are also great reads).

Given to me with the words “it’s like the female version of 1984”, which was probably the most tragic way to introduce this dystopian classic. It is one of the first in the category of 1984 and Brave New World to forwardly show women’s thoughts: the female characters are not settled in the background for men to evolve through them. The story is set in a religious, militarised totalitarian state and follows Offred, an intellectual and imaginative woman who is pretty much forced into becoming a baby factory because of her gender and fertility.

“Feminism isn’t dead. It’s just not cool any more.” Women’s rights used to be something admirable amongst the female gender – the 1920s, the 1950s, the 1970s were full of women demanding their rights. Somewhere down the line we lost sight of the fact that even now women do not have equal rights. Feminism isn’t redundant – Valenti’s well researched and thought-provoking book proves this and, despite being tailored to an American crowd, it makes you very angry at the ever present inequalities between men and women.

It’s no secret that most forms of King Arthur’s legend tend to sideline the female characters, so imagine the significance when Mists of Avalon came out – the legend told from the perspectives of Morgaine Le Fay, Guinevere, Igraine and Morgause. These women are finally three-dimensional, with political, spiritual and rational views that are wholly their own. A friend of mine told me this sounded “gimmicky”, but I can assure you that it is beautifully written, with careful thought and insightful knowledge.

Katniss Everdeen is such a kick in the face to Twilight’s Bella. While Bella brings the YA generation sad stares into the distance and pining over a really creepy old guy, Katniss embodies strength, intuition and a kick-ass “I can survive without either of you two (men)” attitude.

This is a rich, colourful book about four Chinese women and their American-born daughters. It chronicles the hardship they faced (especially as women) whilst in post-WWII China, their journey to America and finally their relationship with their daughters. What’s really interesting here is the generational and cultural gap between them, and both attempts by the mothers and daughters to fill it up again.

An honest and immersive tale of post-war Britain that reads as though your grandparents could be recounting it. Shifting through the lives of two couples; Hortense and Gilbert, whose lives go from the Caribbean to London, and Queenie and Bernard, who find themselves stuck, even before the war. What Small Island does best is illustrating that racial and gender issues are for the most part societal productions, and that in the 1940s it was much harder to break from those boundaries.

Jonathan Lethem’s The Fortress of Solitude

Lethem’s semi-autobiography does not revolve around women, but it does have one of the best female characters I’ve come across. The book is more a study of 1960s-1980s Brooklyn, racial tensions and gentrification, through the eyes of Dylan Ebdus. His mother Rachel, choosing to run away from her unhappy, unfulfilled marriage, makes a significant impact on him. So much so that he later goes back to her words, her image, her politicised views and makes her omnipresent. “If someone asks you,” Rachel tells him, “Say you live in Gowanus. Don’t be ashamed.”

Angela Carter’s books and essays were influential in the feminist movement of the 1970s. Her book of short stories, The Bloody Chamber, best demonstrates her fusion of magical realism and feminism. The book explores female identities in male, malicious fairy tale settings. ‘The Snow Child’ and ‘The Lady in the House of Love’ do wonders in giving female characters thought and ability, but it is ‘The Bloody Chamber’, based on Perrault’s Bluebeard, that truly turns the traditional fairy tale world on its head.

So readers, what powerful female-fronted books did you love as a teenager? What books do you think are instrumental in showing young people that women can be more than just their men?

Photo of a stack of books by Ginny, shared under a Creative Commons licence.