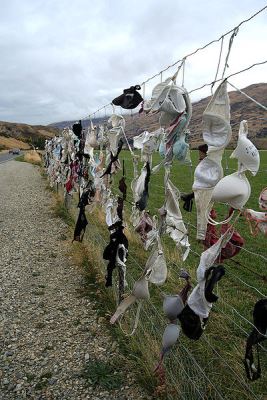 It’s 1978 in north-eastern Scotland, and a particularly pleasant and tactful member of my father’s family tells my mother:

My mother is wearing a long satin gown which has transgressed the rules of etiquette by displaying too much décolletage. Incidentally, ‘décolletage’ was not a word used much in Scotland prior to 1989.

Southern Scotland, in the slightly more enlightened 1980s, my brother and I are two and four respectively. We walk down the street, listening to builders shouting at my mother. She quickens her pace as I squint awkwardly at them through my My Little Pony glasses.

It’s sometime in the 1990s and my mum is standing over the stove, stirring a pot of cabbage soup. She’s doing this so she can ‘lose some weight off her chest’. It’s the only thing she eats for days. Our house smells like cabbage soup for weeks afterwards.

Then it’s the early 2000s and we’re all in a tiny fishing town where my mum has made a pilgrimage to a ‘specialist bra shop’ (this was before the internet had reached the Highland region). She is tearful after buying a bra with a cup size that does not correspond to one of the first four letters in the alphabet.

Thus, I learned that tits are a big deal.

And I happened to inherit my breasts from my mother. They are proper Caledonian boobs. In a land where winter is always round the corner, distribution of body fat counts. They would have allowed a woman to pick potatoes, churn butter and nurse twins simultaneously if need be. Not that I have ever done this, or wanted to.

They have, in their time, elicited cries of joy and/or disbelief, snarky comments, raised eyebrows and thinly veiled disgust. Through their sheer existence, their thereness, they have meant that I spend more of my waking life thinking about them than I reasonably should do. I know that is the same for women who feel that their breasts are marked by their apparent un-thereness. Because, as everyone knows, breasts are public property, in the way that arms, backs and necks are not. They demand careful arrangement and planning to fit into a socially acceptable B to D cup. They can be extremely difficult to hide.

My tits have developed brains in order to quickly counteract comments and to apologise for their existence. They have had to develop brains because sometimes, people think that big breasts and intelligence are mutually exclusive concepts. I have used humour to deflect attention from them and have watched my friends with smaller breasts do the same thing. I have stood in changing rooms, trying on bridesmaids dresses while nameless dress fitters make denigrating comments about them. Other women have often led me to believe that my breasts are not good breasts.

I have listened to teenage boys and adult men comment on breasts too; in sweaty classrooms and leaning out of windows, the things they said built up my world view on how important breasts are.

Of all the words for breasts, ‘tits’ has always been my favourite. There is nothing funny, rounded or playful about the word. It was used in the back of the chemistry class, on the football pitch and on the side of the swimming pool to hurt girls, to pick them apart and to let them know that in the end, the things they achieved, thought and did were secondary to their mammary glands. But ‘tits’ are also something punchy and demanding, flippant and challenging. It is a word that can be spat but not trivialised. It’s a word we need back, to use in our arsenal against those who would use it against us.

Because tits are a big deal, there are whole newspaper pages devoted to them. Column inches are used to scrutinise them. If Simone De Beauvoir was correct in saying that “one is not born a woman, one becomes one”, we become women through little vignettes like the ones above, by peering at the world through badly fitting glasses and either finding it, or yourself, wanting.

I grow more proud of my mum every day. Any comments made by others did not reduce her standing or her worth. She is an incredibly attractive woman, who is also intelligent, kind and thoughtful and has worked hard to make a difference in the world. She is more than the sum of her parts.

And here is what they never tell you: your tits are your own. You are free to do with them what you will. If you are smuggling enough ‘jelly’ to feed ALL the birthday parties or if you’re rocking the smooth and sleek look, they are part of you and they are gorgeous. If they are constructed or re-constructed they are marvellous and you should be proud. If your nipples are dark or pale, big or small, they are awesome. What you choose to do with your breasts does not define your femininity unless you want it to. You can wear clothes which are tight-fitting or loose, pretty lacy bras or, like mine, bras which were designed by the engineers of the Forth Road Bridge. It’s all great. You are more than the sum of your parts.

Our discussion about breasts should be about how they change as you get older, have babies, go through menopause. About what surgery to construct breasts feels like and what having new-found breasts means to you. About lumps or puckering or bruising you worry about. About how different they feel after reconstruction surgery. About how different they are from your friend’s breasts and how that in itself is kind of an amazing thing. We need to take our breasts back from the public sphere, to make them ours again.

And after that work is done we must say to our friends, mothers, daughters, grandmothers and sisters: “All breasts are good breasts”.

Public domain photo of the Cardrona Bra Fence by Ildefonse.