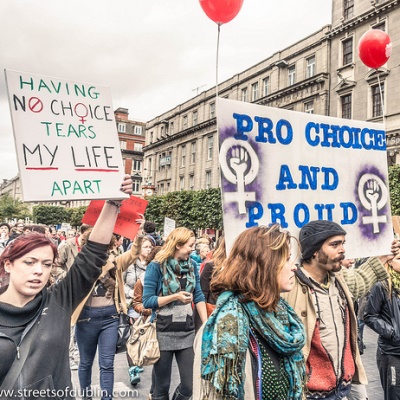 7000 Irish women a year travel to the UK for abortions

By Cara Murphy. Cara is a freelance digital journalist based in Dublin. You can follow her musings on allovertheviews.tumblr.com and twitter. She is also the editor of The Fair Magazine, a monthly publication with a focus on ethical fashion.

In Irish political discourse, “an Irish solution to an Irish problem” is any official response to a controversial issue that is timid, half-baked, and sidesteps the fundamental issue. This week the Upper House of the Irish Government will vote on an abortion bill that allows for a termination under extremely limited circumstances. This bill is not expected to make any dint in the number of Irish women who travel to the UK seeking terminations every year.

Eight months ago, 31-year old Savita Halappanavar died in an Irish hospital following complications with her pregnancy. As her condition worsened both she and her husband repeatedly requested a termination, but this was refused as “[this] is a Catholic country”. Her death sparked international outrage, calls for action by Amnesty International, candlelit vigils and demands for clarification of Ireland’s abortion laws, which are currently the strictest in Europe. In fact, until 1992 the ban on abortion limited the freedom of a woman to travel to seek a termination overseas. This changed with the landmark X Case, a Supreme Court case which established the right of Irish women to an abortion if a pregnant woman’s life was at risk because of pregnancy, including the risk of suicide. Just pause and think about how recently it was that women were restricted by law from travelling.

Abortion is a hot button issue in Ireland: five national referendums have been held on the topic in the last 30 years. Controversies around the issue occasionally bubble up, dominate radio and newspapers for a few days and then die away. Part of the reason for this is because, to all intents and purposes, abortion on demand already exists: an estimated 7000 women a year travel to the UK from Ireland to terminate a pregnancy. So widespread is the practice that a countrywide euphemism for abortion is “getting the boat”. That this expensive solution is more easily available to upper and middle class women goes without saying.

Savita Halappanavar’s death and the subsequent outrage forced the government to act. Last week a bill that allowed for a medical termination after a patient had been assessed by two medical specialists who both agreed that termination of pregnancy would be the only treatment that would save her life was passed in parliament. Provisions for cases of rape and incest were not included in the Bill.

This week the Bill will be debated in the upper house, although it is not certain it will be passed. There is significant opposition to the legislation among senators belonging to the Fianna Fáil party, with just three out of their 14 members confirming they would support the legislation. If passed it will mark the first time that legal abortions will be enshrined into Ireland’s laws.

The Church of Ireland Archbishop and representatives from the Methodist and Presbyterian Churches, the Islamic Cultural Centre of Ireland and Jewish Synagogues welcomed the legislation. Needless to say the representatives of the Catholic Church did not.

For those who are pro-choice this bill does not go nearly far enough. It leaves intact the distinction between risk to a woman’s life as opposed to risk to a woman’s health, despite evidence from doctors about what an arbitrary distinction this is. There have been cases where women have died while medical professionals try to gauge the exact moment of transition from a woman’s health being endangered to her life being endangered. Doctors who intervene sooner could face up to 14 years in prison as could women who are deemed to have had an unlawful abortion.

Throughout the debate the pro-life lobby was vocal, hoping to sway those who support abortion in special circumstances but are against abortion on demand. A particular sticking point was the inclusion of a “suicide clause” which would allow for terminations for those whose unwanted pregnancy was causing them to feel suicidal. The misogynistic view that women are duplicitous creatures who would feign suicidal ideation to hoodwink doctors into giving them frequent abortions was accepted as a starting point for debate. Now a woman seeking an abortion must face a three-consultant review panel to argue her case and prove she is suicidal. This remarkably cruel solution that places such extraordinary stress on already fragile women was one of the few parts of the Bill that was not hotly debated.

Irish pro-choice activists continue to legislate for a referendum on repealing the constitutional clause giving effect to the arbitrary distinction between women’s lives and health. A recent opinion poll found that 78% of people would welcome this legislation and 40% of students believe abortion should be available on demand. In the meantime, women will take out loans to travel in secret to a country not their own for bodily autonomy.

The photo shows the March for Choice in Dublin in September 2012. A woman is holding up a placard reading “Having no choice tears my life apart”, and two other people are holding up a large banner that reads “Pro-choice and proud”, with feminist fists on either side of the text. Image by William Murphy, shared under a Creative Commons licence.