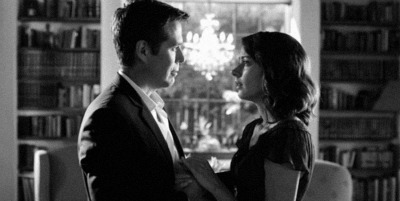 Some ado about Whedon’s Much Ado

Few things could be more promising than the avowed feminist filmmaker Joss Whedon taking on Shakespeare’s beloved Much Ado About Nothing as a fun project knocked together with friends at his house. The beauty of a film like this, done simply for its own sake, is the freedom allowed within the restrictions of the necessarily limited budget and location.

Much Ado is a familiar and oft-performed story (I reviewed the RSC World Stages version recently ) : Leonato (Clark Gregg), father to Hero and uncle to Beatrice, is visited by Don Pedro (Reed Diamond) on his return from the wars, accompanied by Benedick and Claudio, two of his brothers-in-arms, and his actual brother Don John. Benedick and Beatrice, the two clever-clogs of the group, are in a constant battle of wits, which inspires their friends to trick them into falling in love. Claudio, without prompting, falls in love with Hero, and Don John attempts to spoil the match by convincing Claudio and Don Pedro that she’s not a virgin. Antics ensue.

Whedon’s version is definitely an ensemble film: he doesn’t isolate the lead characters. While Beatrice and Benedick are the main event, he pays plenty of attention to the supporting characters, taking the time and space to flesh out background interactions and motivations, adding depth and nuance to the basic plot. It’s clear that every actor is loving being in this film. The cast has an easy chemistry emphasised by the closeness of the space (resulting from filming in an actual house) that makes it feel like an intimate stage production – neither the camera nor the actors can get very far away from each other.

Visually, the film is gorgeous. Shown in black and white, which simplifies many technical concerns, it creates striking and romantic images, helping to blend the classic text with the modern setting. Whedon is well served by his beautiful house, too. Sets in period adaptations, however well designed, tend to feel like sets. This house feels like a lived in (though very tidy, and very full of alcohol) home, further adding to the sense of easy intimacy.

The modern setting does complicate the main point upon which the plot turns – the rejection of Hero due to her supposed disloyalty – as it’s a bit hard to believe that accusations of adultery would shame someone to death in Southern California. However, Whedon notices this problem and pays particular attention to the play’s sexual politics without being overly explicit. Though tied to the script, he chooses to present the issue as a double standard between classes and ideals rather than sex, making it about emotional risk rather than chastity.

Whedon’s interpretation is attractive in its elegance and simplicity

In addition to peppering the film’s dinner-party-weekend setting with various casual snogs among the supporting cast (the watch and the servants), Whedon also creates an interesting parallel with Hero (a calm and charming Jillian Morgese) and Claudio (an intense Fran Kranz) by casting Conrad as a woman (an adolescent-seeming Riki Lindhome) in a lascivious sexual relationship with the Don John (Sean Maher). This is the villains versus the innocents: the tall dark & handsome man with the pouty blond woman versus the tall, striking brunette woman with the pouty blond man. Borachio’s (Spencer Treat Clark) surprisingly sweet shenanigans with Margaret (Ashley Johnson) are briefly shown, and subtly suggest a kind of role-playing that reminds us of the different social strata within the household.

What Whedon emphasises is vulnerability, of both the women and men. Only the villains enjoy anything other than a kiss: Beatrice and Benedick are so troubled by their encounter(s) that only the safety of love and marriage can relieve them, Claudio is so jealous of Hero that the mere suggestion of her sleeping with other people makes him cruel (and he is supported in this judgment by both Don Pedro and Leonato).

The presence of sex between other characters makes it more about the feeling of being abandoned or not being loved back, rather than the “lascivious bed”. It’s the indignity of unrequited love that our leads fear, as Benedick and Beatrice both make clear:

“Love me? Why, it must be requited”

“Benedick, love on; I will requite thee”

Whedon’s well-developed interpretation is attractive in its elegance and simplicity and it’s satisfying to watch such a relaxed cast relish their performance.

YouTube video is a trailer of the film by MovieLine. The picture is a still from the film of Amy Acker and Alexis Denisof, courtesy of BFI.

Katherine works in television production, and directs film and theatre. She is a Shakespeare snob and greatly appreciates the acting of Whedon fav Nathan Filion. Find her on twitter @k8films