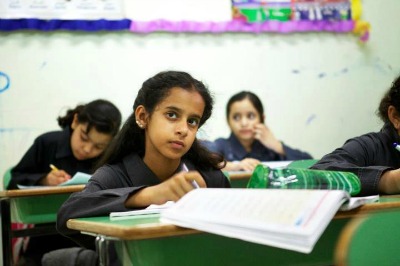 Haifaa al-Mansour comes from a small Saudi town where she grew up, alongside her 11 siblings, in a progressive family of the poet Abdul Rahman Mansour.

In her first short films her family took part both as actors and crew members, and in 2005 her documentary Women Without Shadows, on hidden lives of women of the Persian Gulf, was shown at numerous film festivals.

Her first feature film, Wadjda, opens in UK cinemas on Friday. It is the first full-length feature to be shot entirely in Saudi ans the only feature-length film shot by a Saudi woman. Women In Saudi Arabia cannot vote (this will change in 2015) or work alongside men, especially in public, so parts of the film were directed from the van via walkie-talkie.

In the interview for The Guardian last week, Haifaa al-Mansour says how important it is to create the strong female characters, making their dreams come true against all odds:

“It’s very important to celebrate resistance, pursuing one’s dreams. Sometimes, it’s easy to make a character in a place such as Saudi a victim; people exploit them, they give up hope.”

In a country where women are not allowed to drive, al-Mansour drove herself to her wedding in a golf cart.

Huma Munshi reviews Wadjda for us. She also chatted to the director about the film and shares some of the conversation with us. Huma writes:

Wadjda’s pursuit of her bike becomes a symbol of her assertiveness and (unintended) rebellion. It is also a vehicle by which others around her express their judgement of women’s role in Saudi society: her headmistress is judgemental and dismissive at the thought of a girl riding a bike and her mother initially prohibits her to do so. Only the young boy who lives next door, who has a crush on her, offers to give her his bike. The innocence of youth has not yet been tainted by the hegemony of patriarchy that seeks to suppress a woman’s autonomy.

Wadjda is released in UK cinemas from 19th July.