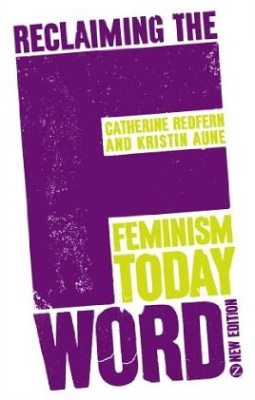 Reclaiming The F Word: an interview with Kristin Aune

Reclaiming The F Word, by The F-Word’s founder Catherine Redfern and Kristin Aune, was published in June 2010: check out our reviews here. The latest edition was released last month, with a new preface. Here, Kristin Aune talks to Nella van den Brandt about the book’s aims, what’s changed for UK feminism since 2010 and her own identity as a feminist.

What was your main motivation to start writing a book on present-day feminist activism in the UK?

Our main goal was to show that feminism today is highly necessary and – fortunately – alive and well. Until a few years ago the idea that feminism was dead and unnecessary was widespread. The media spoke very negatively about feminism. In recent years a number of books have been published that counter this dominant idea. Reclaiming the F-Word was one of them. Looking back, I have the feeling that part of what we aimed to achieve is by now actually realised. The media realises now – to a certain degree – that feminism today still plays an important role. Some of them have difficulties admitting it, but at least they are aware of feminist websites, organisations and initiatives in a way they were not three years ago.

Reclaiming the F Word was published in 2010. Would you convey the same message now, three years later?

The book was written out of optimism. We wanted to show how diverse and lively present-day feminism is, and we are satisfied that this message reached the public. We found an optimistic tone very important and this also differentiates our book from other recent popular writings on feminism. When you only emphasize the constantly returning problems and persistent inequalities, readers become dispirited and don’t believe change is possible. We wanted to show readers that it is important to be active and that certain aims are perfectly reachable.

But currently we are more pessimistic than a couple of years ago, because the reasons why we need feminism have only increased. The economic crisis has worsened and the negative impact it has on the lives of women has increased. Also, in the UK, economic inequality between men and women has deepened. This also has to do with the cuts introduced by the current government in areas such as public services, social security, legal aid and funds for local government. The accessibility of legal aid has decreased and cuts have been made to funding for women’s refuges.

Within the context of the economic crisis, the priorities of feminist groups have changed. While they used to protest a lot against the pay gap, for example, now feminists are primarily worried about the many women who work in precarious conditions or who lost their jobs altogether. Economic inequality has become an important issue. For example, recently a feminist protest took place in London against the precarious working conditions of cleaners. This issue touches immediately upon the discrimination of migrants as well, as cleaners in London are often recent migrants.

How did you become a feminist?

Through academic study as well as personal experience. I took a master’s in women’s studies and this really opened my eyes to feminism. In addition, I was active in church, but frustrated about the subservient position in which women are often placed. My studies helped me to think about my experiences with inequality in church. I wrote a master’s dissertation about single women in church and subsequently did my PhD on women in Evangelical communities. So in my case, my academic activities and feminist activism were connected from the start. But when I got the job at the University of Derby and during the publication of Reclaiming the F-Word, I stopped being involved in activism for a couple of years. However, I realised that I just needed to force myself to make time for activism again, as it is just too important.

So last year I decided to start a feminist Christian group. With a number of like-minded people we founded the Christian Feminist Network. In December 2012 we held our first meeting. We use social media and want to organise study days about feminist theology and create a space for people who feel marginalised in church. We would also like to improve the negative image many feminists have of Christianity. The image of the church as a sexist institution is widespread amongst feminists, which is of course largely just, but not the full picture.

Is it easy to identify yourself as a feminist?

I have it a lot easier than many others. But in church, for example, it is rather difficult. Many Christians in my social environment oppose feminism. My family, meanwhile, has got used to my feminism. By the way, they’re not Christians either. So they don’t really understand either my Christian or my feminist identity. They might ask themselves what went wrong!

However, when I conducted my PhD research on the experiences of women in Evangelical communities it seemed normal to call myself a feminist. Because of my job at university I am quite privileged, I am aware of that. I am white and middle class and often asked to give lectures about feminism. While others who know as much about feminism as I do aren’t asked. The authority one has automatically as an academic makes me feel uncomfortable at times. The positive side of working as an academic at university is that I can decide myself to a great extent about the themes I teach. And so I teach the students about gender, class, ethnicity, sexuality and religion. I can make my students more aware of inequality and encourage them to become activists. And of course it is great to see that some of them do become active. So I am in a position in which I can contribute to the critical awareness raising of young people, which is a great privilege.

A longer version of this interview originally appeared in Dutch in March 2013, at De Wereld Morgen.