Reproductive freedom is a class issue

This is a guest post by Glosswitch, a mum of two who blogs on feminism and parenting issues for her own blog and the New Statesman 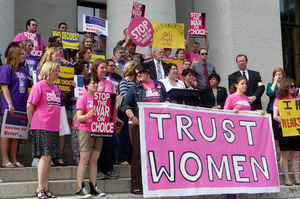 Reproductive freedom is a class issue. If you are born with a uterus, you’d best be born wealthy, too. Otherwise you’re trapped not just by poverty, but by other people’s disregard for a body that should be yours alone. Whatever their position on abortion and emergency contraception, the rich can always buy themselves second chances. An unwanted pregnancy is different when it’s your unwanted pregnancy, but that’s of no consequence when you’re unable to afford the luxury of choice in the first place.

It’s curious, then, to find Left Foot Forward, a blog that claims to offer “evidence-based analysis”, publishing Marko Atilla Hoare’s dishonest rant against reproductive freedom (while not removing it, the same blog has at least offered a counter-argument from Emma Burnell and Christine Quigley). In his piece, Hoare reverses the whole class balance, presenting pro-choice campaigning as a middle-class indulgence which harms “fecund low-income women” (who, in an ideal world, would never really want abortions). In a glorious sweep worthy of the best of the lefty anti-choice males, he characterises the right to choose as “a great coup for Moloch”, whereby those nasty “supposed feminists, instead of seeking to free women from it, celebrate it as their totem”.

“For some women — financially better off, with supportive family and employers — abortion might really be a “choice”. But it is a “choice” whose exercise increases the burden for other woman. If an unplanned baby is viewed not as the responsibility of both parents but purely as the woman’s choice alone, it effectively absolves the father of any moral responsibility for it. It also absolves society of the duty to support her. So abortion undermines women who don’t want it”.

Well, the thing is, Marko… it doesn’t. On the other hand, your insistence that a logical conclusion of abortion is the rejection of responsibility undermines all pregnant people, whatever the choices they have or do not have to make. 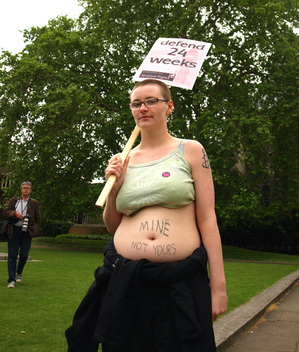 In his use of language and his overall philosophy, Hoare works on the assumption that one should experience one’s body as that of a cis male, regardless of the obvious practical difficulties for the majority of us. The fact that pregnancy is a wholly different experience to those who are pregnant is not considered worthy of recognition. The fact that responsibility for a pregnancy and responsibility for a life are two different things is completely overlooked. The fact that equality does not mean sameness is ignored. Hoare thinks of babies and parents and duties but he doesn’t consider bodies. They’re too messy.

Hoare makes no allowance for difference. In his version of equality, the rules are the same for everyone. That this benefits the likes of him and disadvantages everyone with a womb is, one assumes, purely coincidental.

It’s perhaps not surprising that Hoare then has the temerity to accuse others of dishonesty in their use of language:

Dehumanising the unborn baby (‘foetus’) turns it into a disposable commodity with no value except as an extension of its parent’s desires, after which all liberal values go out the window”.

Whatever you might call it when you’re eagerly awaiting its arrival (and believe me, I called the foetuses who became my sons all sorts of twee nonsense), a foetus is no more an “unborn child” than a child is an extra-uterine foetus. The distinction between the two is not merely temporal but physical. Using convoluted language to suggest that all that differentiates a foetus from a baby is a moment in time – birth – denies the reality of pregnancy and the life-changing dependency of the foetus on the gravida. It’s no more acceptable to describe the pregnant as carriers of “unborn children” than it is to single out a specific class of people and describe their kidneys as “unharvested donor organs”. The minute you redefine the contents of someone’s body as an independent entity, you redefine the whole person. It’s not your right to do so. It’s not your body. And if you think “my body, my choice” is euphemistic, then you don’t understand the power of that choice and what it means to have it taken away.

I’ve had three pregnancies, two of them leading to live births. None of these were unwanted, and the thought of experience an unwanted pregnancy and not having any say in whether or not I took it to term terrifies me (of course, it would terrify me more were I poorer). Pregnancy can be wonderful, but it’s violent, bloody and risky and it affects the whole of your body, in ways both temporary and permanent. You are not a passive container. You are a giver of life and you should not be forced to give life against your will.

Cis men of the left, you cannot theorise the differences between you and the rest of us out of existence. In a fairer world no one would have an abortion due to a lack of funding or support but demand for abortion would remain due to the simple fact that of those people who are capable of getting pregnant, there are some who won’t want to remain so. Cis men, our bodies are not like yours, but they belong to us just as much as yours belong to you. A discourse which assumes otherwise – that the “unborn” are part, not of individual bodies, but of a shared social space – reduces those of us with wombs to mere carriers. Until you accept both our difference and our shared humanity you can’t truly claim to be our allies.

[The first image is a photograph of a pro-choice protest. In front of a crowd of people is a large, pink banner, reading “Trust women”. It was taken by ProgressOHIO. The second image is of a woman holding a banner which reads, “defend 24 weeks”. Her bare stomach has the words, “Mine not yours” handwritten onto it. It was taken by Internets_Dairy. Both images are used under a Creative Commons Licence]