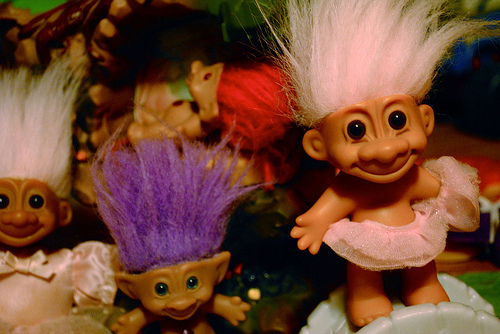 This week, MP Stella Creasy must feel she’s slipped down the rabbit warren into an alternative universe – though one with fewer despotic queens than Alice’s wonderland.

Not because she’s been targeted by a virulent misogynistic online community – we’ve all known it exists for a while now.

Not because an unknown number of that community have organised themselves in an unprecedentedly strategic way to systematically single out and intimidate individual women with incredibly grotesque threats of sexual violence. I’m sure that unlike others surprised by this tactic, Stella has long understood that rape is not about men’s “need” for intimate relationships but is a form of violence used to subjugate women.

Not even because the only reason for Stella and Caroline Criado-Perez being targeted is not even a demand for equality – but for a paltry 25% of banknotes to show a woman as a historical figure of note (well, maybe a third if you factor in that no-one except tradespeople, tourists and criminals have £50 notes). Hell, the Bank of England’s choice of woman from this successful campaign could hardly be less controversial – a romantic novelist is not exactly flying the flag for radical feminism. The incumbent Elizabeth Fry is far more radical.

The real wonder in this Twitter-storm is the amount of time and effort Stella Creasy is having to spend painstakingly explaining to apparently well-educated and respected commentators that it’s not ok for a group of men to repeatedly threaten to rape her to death at a specific time and place. That it’s online, and – so far- there’s not been a documented case of the online misogynist trolls acting out a sadistically violent murder, seems to confuse several otherwise reasonable people. An accepted rule of thumb to answer ‘is it ok on twitter?’ is ‘how would you feel if someone did the same at the next table in the pub/ on the train?’. The best exchange I saw debating this test was between two male journalists (apologies for the very approximated quoting, it’s impossible to find things on twitter once the moment’s gone)

First guy: “my taxi driver leans out the window & shouts ‘nice arse’ at a woman. Should I report abuse in real life?’

Response: “No, but if he gratuitously threatens her with gang rape for voicing an opinion then you probably should’.

The troll campaign itself should silence those critics of the banknotes campaign, who said ‘why are you bothering with banknotes? what about FGM/ Malala Yousef/ other ‘serious’ matters?’ The trolls show beyond doubt that women’s representation in the public sphere is clearly something a vocal minority find high challenging, and is therefore even more important (NB: critics of the ‘no more page 3’ campaign, take note! This stuff does matter). The police reaction is also heartening and – hopefully – a sufficient deterrent to any potential trolls thinking of dabbling. That Twitter has made a swift turn around from blocking the women’s accounts to ‘taking these matters extremely seriously’ is proof that Stella and Caroline have won the argument.

But frankly, I’ve found this whole affair incredibly depressing. Depressing as these are intelligent adults with a reasonable amount of life experience arguing that ‘freedom of speech’ should allow people to drive women out of the public space, with many even directly advising Stella and Caroline to ‘take a break’ from voicing their opinions to avoid this abuse. And depressing as, however brave and determined Stella and Caroline are to keep participating in public life, there will be others watching and thinking ‘I’m not going to stick my head above that parapet if that’s what women have to deal with.’ After all, if someone tells you they are going to attack you in your own home at 6pm, who can honestly say they wouldn’t be looking at their watch come 5.30pm, however unlikely you judged the risk to be? To use the Caitlin Moran test for sexism*, that’s a personal price men (in the democratic liberal West, at least) don’t have to pay for participating in political life. And one that society as whole needs to say is not ok for women to pay either.

*Do men have to put up with this shit? No? Then it’s sexist.

Image by Cali4beach shows an array of Troll dolls and is reproduced by kind permission under a creative commons license.