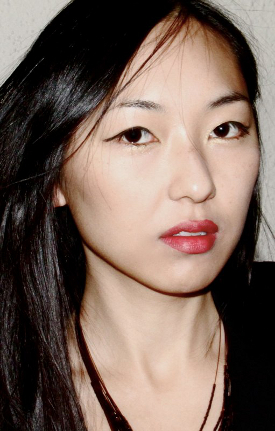 Carol Rhyu (AKA White Blush) first came to my attention a year ago when, having read my blog post about K-Pop and J-Pop, she got in touch via email about her song ‘Without You’. This gorgeous, eerie, minimal and heartbreaking song stayed with me and I’ve included it in music paste ups on the blog quite a few times. It’s the sort of song that haunts you.

Carol has continued to write and compose music, and her first self-titled White Blush EP appeared on Bandcamp in late 2012. Earlier this year, it became available to download on Spotify and Amazon in the UK and I was reminded of its sophisticated and intricate nature all over again.

The EP opens with ‘Tru Luv’, a song driven by big meaty synth beats coupled with ethereal swirling and echoing vocal layers. Rhyu’s main vocal is US every-girl, and the overall effect is substantial. ‘Mirror’ follows, and it’s a more tentative affair that begins slowly but gradually picks up pace. As the bass increases in urgency, it begins to resemble an excited heartbeat and the melody skips and weaves in and out of this urgent heartbeat as Rhyu whispers.

The air of accomplishment is stylishly slick, while the song itself carries a distinct air of eerie menace

The most affecting, atmospheric and fully realised of the songs is ‘Jolene’, a mini masterpiece of mournful Strawberry Switchblade and Cocteau Twins tinged electro minimalism. It is has a beautiful hook, whispered chorus and moody genius coupled with assertive bass and atmospheric keyboard riffs. While ‘Jolene’ tugs insistently at the listeners’ heartstrings, the following track, ‘Wait’, the B-Side to ‘Without You’, is both simpler and emotionally rawer. It says a lot that it held its own against ‘Without You’ and, even now, it is still shattering: Rhyu sounds like a woman crying in the mist.

The cryptically titled ‘808 Myst’ is tentative and experimental, an instrumental with a slightly forbidding atmosphere that is reminiscent of the Radiophonic Workshop soundtracking a lonely satellite as it bounces around the earth.

Final track ‘Juice of my Heart’ sets a surging pace. The air of accomplishment is stylishly slick, while the song itself carries a distinct air of eerie menace. Despite the blood spattered video, this is a seductive piece, reminiscent of My Bloody Valentine dueling with Curve as Donna Summer tries to make herself heard over the resulting soundtrack.

While a lot of electro pop is dominated by Swedish acts and producers at the moment, Rhyu’s work shows that she is coming at the genre from a very different direction. My Bloody Valentine and Battle Royale (which ‘Juice of My Heart’ is an ode to) are more likely to be touchstones than R&B and house-electro hybrids. If her work sounds like anyone’s, it’s Julee Cruise singing ‘Falling’ or perhaps This Mortal Coil in a mash up with Curve.

I emailed Carol a few weeks ago for a Q&A. Here’s what she had to say:

When did you start recording as White Blush? Where did the name come from?

I started recording early last year. I thought about the name for a while…something about wearing blush excites me and gives the impression that I am aroused or embarassed, when it’s really just a powder.

Yes, it is. I’d recorded in other projects as a vocalist but this is the first time I put something together from scratch.

Do you see White Blush as a studio band or a live band? How are the two different for you?

I see it more as a studio project than a live band. I think a band is more about the collaborative aspects of writing and recording together, but I feel that I’m trying to explore a sound on my own.

How do you go about writing/composing songs?

It’s pretty random and chaotic, something I feel I have no control over whatsoever. I’m mostly [a] scavenger for moods and melodies. I just stay true to the idea, the story and let that dictate the rest.

Whose music are you listening to at the moment?

At the moment, I am listening to a lot of Mozart and My Bloody Valentine.

The video to ‘Juice of my heart’ was very bloody, what inspired the video?

I had a dream that I was in a diner. I was flipping out on a bunch of K-pop stars and forcing them to dance in their own blood to my somber tune. I sort of think that would have been more interesting, even if it did not make much sense.

Have you worked as a waitress?

Ha! Yes, in various periods of my life for a pancake house, then a big chain restaurant, and more recently at a Japanese robata grill.

You’ve said that ‘Without You’ was a personal account, did writing it help? Does it feel difficult performing the song?

My mom, my friends and fans who write me emails who endlessly support whatever I do.

What’s next for White Blush?

I am working on my first feature film, something I’ve been dreaming about for years.

Head and shoulders press shot of Carol Rhyu in black, against a grey background. Taken from the White Blush website.