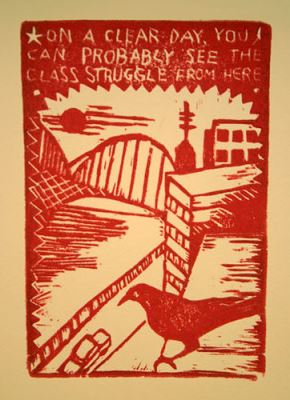 By socialist I actually mean Marxist but I didn’t want to alienate people with my title, which says a lot eh?

Anyway, I actually find a lot of the Marxist theory I know to be spot on and to really speak to my experience of being working class. For example, I’ve worked as a life model. My hours of sitting naked in considerable discomfort produced artwork I couldn’t have bought with the wages I was paid for sitting there naked and uncomfortable. My labour literally produced an alien, inaccessible product to me. I currently work as a waitress and there is a clear conflict of interest between myself and the owners of the restaurant I work for: they want it to be as rammed as possible, I want quiet, easily manageable shifts. They want customers to drink as much as possible, I want quiet, easily manageable customers. They want me to go easy on the free olives, I want good tips.

But this conflicted relationship with my bosses is not the defining one of my life, as it’s meant to be in Marxist theory, and having to carry out alienated labour doesn’t oppress me in a more meaningful, far-reaching way than daily street harassment. Just because it looks like more of a system doesn’t mean it has a more systemic, inescapable, defining effect.

It’s important for men on the Left for working class oppression to be ‘special’, though, and for waged, alienated labour to be a defining dynamic in all working class lives, because from there you can proceed to the fallacy that the working class have more in common, more shared than conflicting interests.

But Working Class Men of the Left: it is not for you to tell me that I have more shared interest with you than with women of other classes or that my shared interest with, say, Kate Middleton, whose body is public property in a way no (cis) man will ever know, is less important than the interest I have in common with you. That’s just a way for you to deny the privileges which my oppression as a woman confers on you, like being viewed as more authoritative, capable and human than at least half the population, which must feel pretty good and work out alright for you in practice too.

Ironically, it is self interest which lies behind the declaration of working class shared interest trumping all else: it allows the Class Struggle to trump all else too.

The Class Struggle is constantly manipulated into being The Working Class Man’s Struggle as well, leading to a lot of self-serving internal contradictions. For example, nothing pisses me off more than the way men on the Left, Marxists in particular, talk about sex work.

Marxists are good at calling the choice between selling your labour and losing your livelihood what it is: no choice at all. Hence why Marxists often call wage labour wage slavery. But what does this mean when the labour to be sold is sex? The fact that you’ll lose your livelihood as a sex worker if you don’t do it surely has some bearing on how consensual such sex can be.

Marxist men like to deny that this is any worse than non-consensual coffee serving or whatever. But the idea of making someone have sex if they don’t really want to being a particularly bad, violating and oppressive thing to do is the wisdom behind rape being a crime in its own right, with its own name (it’s also something about which women know a lot more than most men). And yes, sex workers may want to have the sex they have for money, but in the face of the pressure which potential loss of livelihood puts on that consent, punters can surely never call it ‘uncoerced’. And what is coerced consent?

This doesn’t deny the agency of sex workers any more than Marxist theory ‘denies the agency’ of any worker. Which is why the agency I focus on is the punters’. Why defend their choice to have sex which they can’t be sure is 100% uncoercedly consensual?

I also wonder if Marxist men would feel differently if they were realistically likely to ever have to consider doing sex work. It doesn’t really matter though, as most aren’t.

And there, we have quite a conflict of interest between them and working class women.

The image shows a book plate of a crow overlooking a cityscape, under the text “On a clear day you can probably see the class struggle from here”. Shared by Elaine Ashton under a Creative Commons licence.