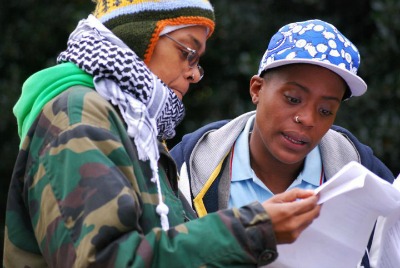 Recently I caught up with my friend and former London Lesbian and Gay Film Festival co-programmer Campbell X (left, on the set with her actor) to ask a couple of questions about her debut feature Stud Life (2012), a romantic comedy about LGBT life on the multicultural streets of East London.

The film has set a new benchmark in British queer cinema and confirms Campbell as one of the UK’s most interesting and intelligent queer filmmakers working today.

Your background is in documentary short filmmaking: writing and directing beautiful films like B.D. Women (1994), Paradise Lost (2003) and Legacy (2006). How and why did you decide to move into fiction filmmaking?

The weird thing is that all my films have had some fictional element to them. I have always used actors in my documentary and short film work. I question the notion of ‘truth’. Documentary is often considered ‘factual’ but it is just the ‘facts’ interpreted by the filmmaker. The move to what is considered fiction was a natural progression. I love storytelling and creating worlds that people get a chance to immerse themselves in for 90 minutes.

I remember that when you first told me about your ideas for the film, you said that you wanted to make an anti-love story. Can you expand on that? There are a lot of weddings in the film!

I didn’t want to make a typical love story. So the lesbian relationship doesn’t really have a clear happy ending, JJ calls it a “new beginning”. There are many weddings in Stud Life but in every wedding, apart from the one at the end, something goes wrong or all is not as it seems like, for instance the polyamorous coupling or the marriage of convenience.

The film’s primary (platonic) relationship is between a lesbian stud JJ and her gay best friend Seb (played by Kyle Treslove). This is a friendship so rarely seen in cinema and one that I really appreciated as I have a lot of very close gay friends. Can you tell me how you tapped into creating those characters? I think all lesbians have close gay male friends. Gay men and lesbians share similar same-sex worlds even though we are not the same gender. There is a bond that has gone back since time began.

The problem is that marketing of movies and TV shows or club culture has led us to believe otherwise by using a mono-gendered hook to appeal to certain audiences/markets. And more and more people are believing the construction of our lives as we see them in mainstream media rather than looking around at their own realities.

Is buying flowers for a lover or looking for true love not a feminist thing?

Like you, I also have and always have had several close gay male friends. I came out into a gay male world. It was gay men who looked after me at clubs and who I partied with during my first experiences in LGBT world. I also felt an affinity to gay men as I had more in common with them than lesbians in terms of my own personal coming out narrative. In Stud Life, I wanted to explore that friendship between two different types of masculinities as well.

JJ has some fairly traditional character traits when it comes to “treating her woman right”: she likes to buy her flowers and she is looking for “true love”. Do you think that JJ would call herself a queer feminist stud?

Is buying flowers for a lover or looking for true love not a feminist thing? LOL!

JJ is not a political person. She is not analytical and doesn’t really think through things. She is post-feminist. She assumes many things, like equality with men, but doesn’t question her own relationship to masculinity. She is about having a good time with Seb, her gay friend, and finding someone who will love and desire her. 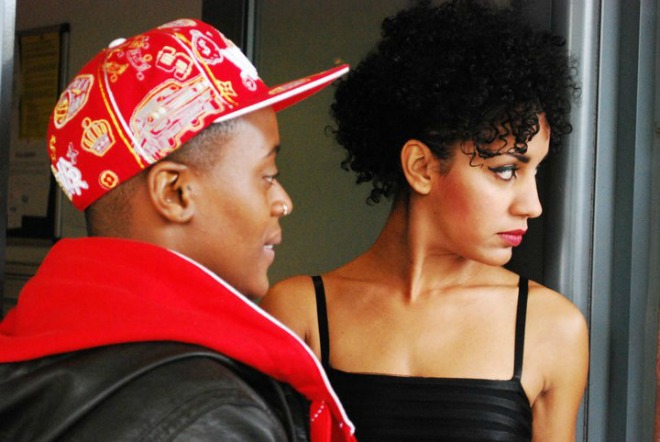 How did you find your cast? Especially T’Nia Miller who is so natural as JJ. I read somewhere that you made her dress like a stud for a couple of weeks to prepare for the role.

All cast were auditioned for the role. I put out casting calls on BlackmanVision and also through casting websites, Facebook and Twitter. T’Nia came to the audition dressed as a stud. Her energy and commitment and also performance were amazing. I did make her dress and behave like a stud leading up to the shoot. I wanted her to experience what it was like to walk the streets of London as a Black masculine of centre person. Extreme method acting I suppose. But because T’Nia Miller is very feminine, I wanted her to come out of that comfort zone and venture into an unknown area for her. She is an amazing actress and worked very hard to ensure she was faithful to the character and not play a caricature, which sadly I see a lot in cinema.

The film reminded me of early Spike Lee films, like Do The Right Thing or She’s Gotta Have It. You root the story in London’s unique street style, slang and music, creating characters that feel fresh and funny. Was Spike’s work influential on your films?

Spike Lee has influenced so many of us, it’s true. But I am also influenced by music videos, poetry slams and YouTube. London is such an amazing vibrant place and we rarely see this side of London in films. We rarely see white people chatting patois, or LGBT people partying to dancehall music. I show a side of the London LGBT scene that is underground yet out in the open for those who have experienced it.

In the past you have collaborated with other filmmakers such as Cheryl Dunye, Lisa Gornick and Sarah Wood, mixing sound and doing camerawork. What aspect of the filmmaking do you enjoy the most?

I think it is very important as queer filmmakers that we support each other’s work and collaborate when we can. Both locally and internationally. I enjoy all aspects of filmmaking but mostly I enjoy working with actors and writing for actors.

You recently took part in the Gender Talents conference at Tate, speaking about ‘How to love being the outsider – a manifesto for Queer People Of Colour (QPOC) online creativity’. With that in mind, when you decided to make Stud Life, how much or little support did you receive as a QPOC filmmaker from public/private funding? Do you believe that being an outsider and working on a limited budget can work to your advantage?

Working on a limited budget forces you to have a discipline in terms of shooting and prioritising what is important to telling the story. In addition, if we had received studio money for Stud Life I would not have been able to work with the cast and crew of my choosing. I had flexibility in working with many people from the LGBT community and indie film world. However, I think we need to ask ourselves hard questions RE financing and funding for LGBT films in the UK, and why it is that we are consistently not funded – particularly for queer women originated/written/directed stories.

The talk at the Tate was to make people actually understand that nobody is really an outsider. We assume we are only if we accept the dominant paradigm. Once we resist it, everyone is entitled to have a voice and to tell their own stories.

How did you start to build your online campaign to raise funding for your film? How did you find (in marketing talk) your USP?

I was one of the first QPOC in the UK to use crowd funding for a film. It was in the early stages and not many people had heard of it back in 2010, which is ancient times in internet history. Crowd funding is now so mainstream that even celebrities are using it to fund their passion projects. I promoted the campaign on Facebook and Twitter and via good old email. The USP was that there was not a film like this made in the UK. I do hope there will be many more from other filmmakers too. 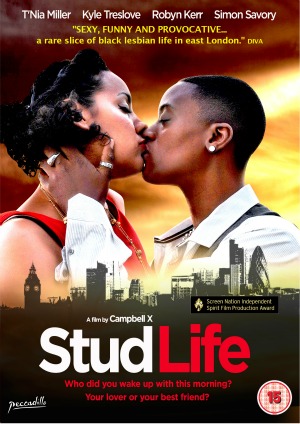 At the moment you’re in the US promoting the film; have audiences responded differently in the US than at home?

It appears that Stud Life tells a universal story so audiences over the world have connected with the story in similar ways. I sit with the audience when they are watching the movie and they all laugh, groan, cry, shout in the same places. The audiences that are familiar with patois will get some nuances, but as the images are so strong, it is easy to follow the story anyway. I was initially nervous that international audiences would not “get” the language or story but of course culture is more globalised now through music and TV formats.

Our (Club Des Femmes’) most recent film night centred around feminist science fiction, where we are explored the concept of FutureWoman. How do you envisage yourself in the future, what are your utopian ideas as a queer filmmaker?

In a perfect world all queer actors in general and actresses in particular would be out and supportive of queer filmmaking work. Lesbian filmmakers would get to make more feature films. Queer films would be financed better. Queer audiences would be open to films where multiple genders existed in the same frame. I personally would just like to be able to make more films in the future – Insha’Allah.

All photos by Paula Harrowing. First picture is of Campbell X and T’Nia Miller on the set of Stud Life, from the film’s Facebook fanpage. Remaining images courtesy of Peccadillo Pictures: second and third are stills from Stud Life and the last one a DVD cover.