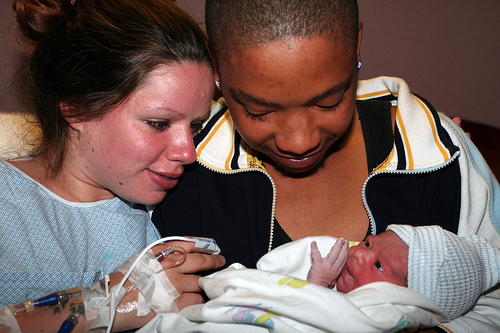 If you had to think of an obvious successor to leading 1970s feminist campaigner Sheila Kitzinger marching with a ‘home-made rubber vagina, birthing a baby [doll], and rocking and rolling my pelvis in a birth dance’, it wouldn’t be Kirstie Allsopp. Although, her craft skills would certainly be up to creating the fake vagina.

But it is Kirsty Allsopp, of ‘Location, Location, Location’ and ‘Kirstie’s Homemade Home’ fame, who is re-igniting the debate around choices in childbirth (listen to Monday’s Women Hour which she guest-hosted). That the natural birth movement, led by Sheila Kitzinger and the NCT (whose ‘n’ used to be for ‘natural’ not ‘national’), has been far quieter in the last couple of decades must largely be down to its huge success, as part of the wider feminist movement.

Kitzinger’s ‘birth dance’ march was employed in a Canadian campaign for the legalisation of midwifery – yes, that was legalisation. To take a more anecdotal approach to the huge impact the movement has had on such a significant part of many people’s lives, let’s take the scene in Mad Men when Better Draper gives birth (as obviously a US drama is a fantastically reliable source of historical information). Don is left to share a bottle of whisky in the waiting room. Betty is told firmly by the nurses ‘stop fussing and be a good girl’ then put into ‘twilight sleep’ – which I can only assume involves significant doses of opiates. The routine episiotomy (cut to make your vagina wider) and shaving of pubic hair are not shown.

How different to my midwife who apologised for having to make me sit down on the bed for monitoring, suggested useful ‘jobs’ for my husband to help with and whispered advice to avoid a c-section with ‘don’t let us spoil this for you’. These days, Brazilians on the NHS just seems bizarre, episiotomy is far from automatic and hospitals are rated on how low their c-section rate is.

Yet two generations on from Mad Men, the emphasis on natural birth and our universal health care system seems to have made us forget that left to her own devices mother nature has an extremely poor mortality rate – internationally, 800 people die every day for want of basic healthcare in pregnancy and birth.

Allsopp has picked up on the unspoken but generally understood attitude prevalent in new parents that a ‘natural’ birth is a success, and anything else is somehow a failure, particularly the dreaded c-section (which horrifically leaves you alive with a healthy baby). On hearing about my own birth experience – which was somewhere in-between as a ventouse assisted delivery (which involves, as the doctor succinctly put it, “you push, I’ll pull”) – people have actually suggested that I might be able to do better next time, as I nearly managed it.

Somehow the natural birth movement’s drive for people to have control over the choices made about how to manage their bodies during labour and birth has turned into an idea that people giving birth can actually control their bodies and what complications do or do not arise. Given the amount of control I felt I had over how my own labour progressed, this is the equivalent of saying ‘Heavy period this month? Never mind, try again for a light one in four weeks’.

The NCT emphasise any focus on natural birth is their response to what expectant parents want. I can’t think of why any of them wouldn’t want this, but only a slim majority of 60% will actually get it. The requirement to do a birth plan is intended to make pregnant people feel confident about what is an undoubtedly daunting prospect. But it can also set up a false sense of control over a process ultimately driven only by mother nature (unless the medical profession pre-empt her to extreme levels, as they used to). The most pernicious of the ways this idea that one can completely control one’s birth experience is the ‘spiral of intervention’ theory, taught by many NCT practitioners amongst others. This notes that those who have emergency c-sections tend to have used more pain relief than those who haven’t, therefore extols holding out against the drugs at all costs. But couldn’t it be that those who have underlying complications in their labour are more likely to need more pain relief to cope with them and also more likely to need a c-section?

In this new debate on rights in childbirth, we need to protect and expand individuals’ ability to control the choices about their bodies, which could all too easily be eroded as our maternity care is increasingly over-stretched. At the same time, we must recognise no one can fully control their body and that Allsopp is right that a healthy parent and baby is a successful birth – however they got there.

NB – this piece has been edited since first posted to remove the unintended cissexist suggestion that only women get pregnant and give birth (see comments below).