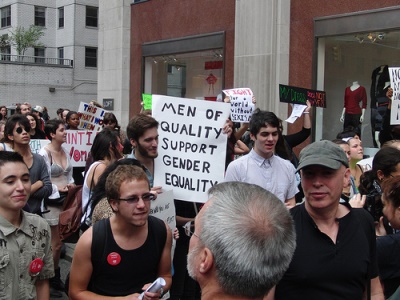 Men must stand against this misogyny

Who could have predicted that putting Jane Austen and a slightly misjudged quote from Pride and Prejudice on the back of the £10 note would lead to so much rage among male Twitter users? Trolling and sexism on the internet are nothing new, but the nature and scale of it on this occasion seem to have reached unique heights. With this in mind, I believe that it is high time men started doing more to stand against misogyny online, but also throughout society, and in our own lives.

Whilst there are important discussions to be had about why people feel that they can behave in such a way online, what is most significant in my view is the fact that these trolls are choosing women as their targets, and misogyny as their vehicle. It is surely an indictment of the society we live in that such ugly hatred can be so openly expressed towards women. How can we be so hateful of one half of the population, the same people who are our mothers, our daughters, our sisters, our partners, our friends, our fellow citizens?

Of course, not every man is a misogynist. But that does not mean we can stay silent about the misogyny of others. All men benefit to some extent from the patriarchal system in which we live, and men have to recognise the position of privilege that this gives us. Online abuse and all other forms of misogyny are therefore not things which should be left for women to deal with alone. Misogynist abuse cannot be treated as a ‘women-only’ issue; quite the contrary, because men are its main perpetrators! Men therefore also have a responsibility to challenge sexism wherever we encounter it. A vital part of the fight against the oppression of women is for men to take up the cause of feminism, and to tell other men that sexism and misogyny are deplorable.

This is something we can all do in our everyday lives. We are not talking about an injustice taking place on the other side of the world, that we are powerless to do anything about. It is everywhere, and as feminists have long pointed out, the personal is political. The whole world is a battlefield against sexism. On the internet, in the newspapers, in the relationships of people that we know, in conversations with friends, even in ourselves. We have to stand up and say that we are men, and that we think this behaviour is simply unacceptable. I confess that I have never quite been able to get my head around Twitter, but now feels like a good time to start trying harder, if only to add my voice to all those standing in support of those women who have been subjected to abuse. We must drown out the voices of the misogynists.

In order to tackle misogyny, we must confront the ideas, discourses and norms that underpin it, and which legitimise and justify it in the eyes of its perpetrators. We have to put forward alternative discourses which illustrate that sexism and misogyny are never legitimate or justifiable.

We have to demonstrate that different forms of masculinity are possible, and are not oppressive to either women or ourselves. I believe that our society’s idea of masculinity holds men back, inhibits and limits us from being the best we can be, leaving many of us alienated, disempowered and insecure. How can any perpetrator of misogynist abuse truly feel proud of their behaviour? All the loathing wrapped up in this abuse gives a poignant insight into where this society’s masculinity leaves so many men: hateful of women, and hateful of themselves.

Only by freeing ourselves from the chains of these gender norms can we be free to be whoever we want to be, and not have to constantly feel insecure, inferior or ashamed about our failure to conform to them. A more equal society would therefore mean the liberation of not just women, but men too. It would enable us to reach our full potential, and to engage in more honest connections with people of all genders, free of destructive power inequalities.

Challenging misogynistic ideas and behaviour among other men, and even in ourselves, requires a great deal of courage. But not as much courage as that of the women who have refused to bow to the endless abuse of the Twitter misogynists, for example. This abuse demeans all of us, as do all instances of sexism and misogyny. Look around you; the patriarchal system expects so little of men. There is so much more to us than that. We are better than this hatred, prejudice and chauvinism, and it is time for us to show it.

Photo of a group of men and other people on New York Slutwalk 2011 by xoder, shared under a Creative Commons licence. One man holds a sign reading “Men of quality support gender equality”.