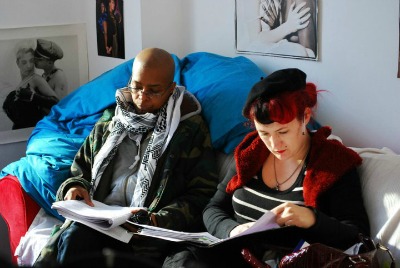 Selina Robertson, film writer and festival programmer, as well as our regular contributor, caught up recently with her friend and former London Lesbian and Gay Film Festival co-programmer Campbell X.

They talked mainly, but not only, about Campbell’s debut feature Stud Life (2012), a romantic comedy about LGBT life on the multicultural streets of East London, starring T’Nia Miller, Kyle Treslove and Robyn Kerr. The film has set a new benchmark in British queer cinema and confirms Campbell X as one of the UK’s most interesting and intelligent queer filmmakers working today.

The film’s tagline reads: “Who did you wake up with? Your lover or your best friend?”. Praised by Selina for making a friendship between ‘Stud’ JJ and a gay man Seb the central, albeit platonic, relationship of the film, Campbell said:

I think all lesbians have close gay male friends. Gay men and lesbians share similar same-sex worlds even though we are not the same gender. There is a bond that has gone back since time began.

The problem is that marketing of movies and TV shows or club culture has led us to believe otherwise by using a mono-gendered hook to appeal to certain audiences/markets. And more and more people are believing the construction of our lives as we see them in mainstream media rather than looking around at their own realities.

Like you, I also have and always have had several close gay male friends. I came out into a gay male world. It was gay men who looked after me at clubs and who I partied with during my first experiences in LGBT world. I also felt an affinity to gay men as I had more in common with them than lesbians in terms of my own personal coming out narrative. In Stud Life, I wanted to explore that friendship between two different types of masculinities as well.