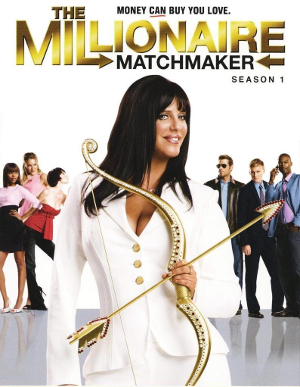 The Millionaire Matchmaker: the unravelling of feminism?

I have discovered a guilty pleasure. Lunchtime ITV2: The Millionaire Matchmaker. This show features ‘expert’ matchmaker Patti Stanger, a woman whose 50-year-old face seems to be miraculously frozen at 30, who runs the ‘Millionaire’s Club’- a Los Angeles-based dating service which matches (predominantly) male millionaires to the girls of their dreams. After meeting the men and discovering their likes and dislikes (the latter, unsurprisingly, being the significantly longer list), Patti and her team interview women to find the closest compatible match. The millionaire then partakes in a ‘mixer’, where the best matched (read: best looking) women all come together in a bar, apparently falling over themselves to speak to the middle-aged millionaires. Following this, the millionaire chooses one ‘lucky’ woman to take out on a date, which he usually uses as a chance to showcase his wealth to the woman and the public, after which the couple decide whether they would like to see each other again.

As strange as it is compelling, the show may as well be subtitled “Feminism? What’s feminism?” The more episodes I watch, the worse it seems to get. Patti, a notorious figure for feminists, seems to value superficiality and traditional gender roles above all else. In the initial interviews with the men, Patti asks them who their celebrity crush is, what hair colour they prefer in women and their racial preferences. The responses range from marginally concerning to downright depressing. One particularly chauvinistic millionaire announces he wants a woman with no career aspirations so she can follow him around the world at the drop of a hat when he needed to travel for business. Another man, aged 58, announces he wants children and would therefore require a woman of childbearing age, “preferably in her twenties”. Let’s not mince words here: what these men are after is a trophy wife. Invariably, men come on and ask for intelligent women. One requests someone who is educated to Masters level and not below, but when it comes to the mixer he chooses the best looking woman over a roomful of intelligent, thoughtful women with PhDs.

This is nothing compared to the ‘screening process’, however. Despite the men’s best efforts to be the most sexist and misogynistic people on the show, they fail miserably in comparison to Patti. The poor, unsuspecting women are brought into Patti’s office in groups of three to be judged by Patti and her team. What follows is a rigorous, acrid and vicious physical assessment. If you have red hair, you’re unfortunately dismissed immediately. If you’re not wearing a tight-fitting cocktail dress, you are informed you have no style and are ordered to change. One woman, visibly older than her counterparts, is told she looks older than she claims and ordered to go and get her driving license to prove her age. If Patti disapproves of an outfit or hairstyle choice, the woman in question is threatened with exclusion from the mixer, unless she overhauls her appearance. And, even more depressingly, the women comply: arriving at the mixer plucked and preened to within an inch of their lives. Patti’s word is law and, as Patti isn’t usually on the side of the women, this doesn’t usually work out well for them.

She herself objectifies the women and treats them as sex objects, even before the women get in front of the millionaires

Patti seems to be genuinely bemused by women who have careers and goals, despite the fact that she is a career woman herself. One woman, for example, is a nurse, but when she dates one of the millionaires Patti is shocked she wants to continue doing her work. “But… you’re a millionaire!” she utters, looking from one to the other, in uncomprehending disbelief. A career and a rich partner? Unthinkable.

Her assessment of the (few) female millionaires is particularly vicious. One of the women runs a pole dancing club, and her hair extensions and tattoos cause Patti much concern. She is apparently nowhere near ‘feminine’ enough to get a ‘nice’ man, and it is no wonder she’s been divorced three times because, according to Patti, looking like that means she’s never going to attract ‘husband material’. She is then forced to change into a dress she doesn’t like and have her hair redone and curled to look more ‘girly’, but dares to defy Patti’s demands and turns up to the mixer in her own clothes. Patti is displeased, to say the least. “Why would you do that?” she asks. “Why would you want to look so… masculine?” God forbid this woman might actually be happy with herself and how she looks. It’s apparently unthinkable that she might want to be with a man who liked her for herself, who she can be genuine with and wouldn’t have to hide herself from. 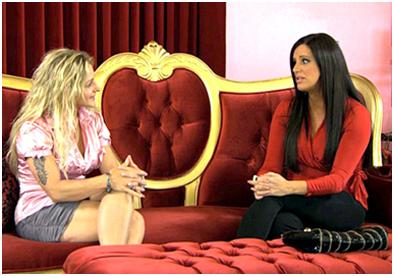 I find this idea of this particular woman looking ‘masculine’ particularly interesting because, actually, she couldn’t look any further from it. Blonde, waist-length hair; a penchant for pink, flouncy dresses; sky high stiletto heels. But it is the way she conducts herself and her behaviour that apparently makes her masculine, according to Patti. This woman is independent and loud. She knows what she wants and goes for it. She is a self-made millionaire with a string of ‘toy boys’ and ex-husbands. In Patti’s mind, this is the story of a man, not a woman. Someone with this background couldn’t possibly be ‘feminine’. Instead of being seen as a confident woman, she is viewed as ‘like a man’.

The women Patti likes seem quiet, dependent and passive. They let the men take over planning the dates and go along with whatever they ask. One woman is subjected to helping her millionaire date with his work, moving furniture from people’s houses, in stiletto heels. Hardly ideal footwear, but she does it, no questions asked, because it’s the man who’s in control and this is how Patti wants it. Indeed, one of her ‘club rules’ is that the man plans the dates, so men have the authority, while women are to remain voiceless, powerless and subdued.

There is a complete lack of empathy towards women throughout this show. Although Patti does rap the knuckles of the men when they mistreat their dates (usually if they drop hints at sex throughout the first date or subject them to some horrific date activity), it’s nothing compared with how she treats the women. They are told, outright, in front of the other women and the cameras that they are “ugly”. Patti’s assessment, as with the men, is purely superficial. Although she shows mild interest when a woman has a notable career or hobby, this actually wouldn’t matter if she was ugly because she wouldn’t have a hope in Patti’s world.

Patti is like an extension of the misogynistic men she is hired by. She herself objectifies the women and treats them as sex objects, even before they get in front of the millionaires. It says a lot that the men have to pay to join Patti’s club while women can join for free if they’re good looking enough. If they had insecurities before meeting Patti, they surely will now. No blemish of supposed flaw is unremarked upon and any hint that the women don’t completely coincide with Patti’s rigid and regimented (and somewhat impossible) heights of femininity and beauty leads to them being chastised. These are framed as disgusting impairments that will repel men. Perfection is everything and anything less than that means you’ll be alone and miserable forever.

It’s all very well laughing about the almost unbelievable sexism on the show, but this is actually quite troubling because it relates to wider cultural issues about body-only sexual objectification of women and hegemonic patriarchy

The fact of the matter is that the men never actually get to see the women who Patti has dismissed. Who knows, if they had been allowed to attend the screening process, they might not actually have noticed those apparently glaring flaws and, if they had, perhaps it wouldn’t be the be-all-and-end-all. Patti, as a woman under public scrutiny herself, could sympathise with the women on the show. Indeed, she’s often submitted to acidic physical judgements regarding what she wears and how old she looks. You might think this would make her more empathetic but, if anything, it makes her a harsher and more vicious judge. Despite Patti’s experiences of knowing what it’s like to be insulted for insignificant details, like wearing the wrong nail polish (shock, horror), she doesn’t stand in solidarity with her gender. She doesn’t fight for the men to stop being so stoically superficial. What she does is altogether more infuriating and depressing: she continues to foreground female appearance above any other characteristic. “Are you in the early stages of obesity?” she asks.

It’s all very well laughing about the almost unbelievable sexism on the show, but it is actually quite troubling because it relates to wider cultural issues about body-only sexual objectification of women and hegemonic patriarchy. When a 58 year old millionaire announces he wants someone “size zero… up to size three”, it places the women under immense pressure to conform to these norms. The pressure to be as thin as possible is just one of many burdens placed on women nowadays; we have to deal with insults about pregnant bodies, the quest for physical perfection, slut-shaming and the pressures of motherhood (to name just a few issues). And that’s not even going into career inequalities, money inequalities, parenting inequalities, housekeeping inequalities… where does it ever end!? Women need to unite against all this female hatred. We must fight the patriarchy!

Patti’s attitudes to the women on the show are far more damaging and dangerous than they are entertaining. Her violent criticism of women for petty and insignificant things like hairstyles or a choice of outfit are unceremoniously undoing the achievements of feminism and feminist movements. The women on the show are so rarely fleshed out with identities of their own outside of their features, style and physique; they are encouraged into traditionally exploitative roles of dependence and submission.

What does this all this say to the modern woman about actually being a woman? It’s time for some major changes and I don’t mean for our hairstyles.

1. A smiling Patti Stanger wearing a white fitted suit and holding a gold bow and arrow. Two groups of three, appearing to be split along gender lines, stand behind her. The female presenting group (left) are dressed in figure hugging clothing and posing in a stereotypically sassy and somewhat contorted way, with one member looking back at the other group with her hand on her hip and another leaning forward towards them. The male presenting group also pose (though arguably more subtly). One member is wearing smart-casual attire while holding a mobile phone, one wears a suit and another wears shades and a leather jacket. White background. This is taken from the cover for the DVD for Season one of Millionaire Matchmaker and has the words “MONEY CAN [underlined in red] BUY YOU LOVE” in black, “THE MILLIONAIRE [gold letters] MATCHMAKER” (in black) and “SEASON 1” (in black) at the top.

2. Screenshot of Patti and the candidate who turned up at the mixer in her own clothes (discussed in the article). They are both sitting on a pink and gold sofa with one leg crossed over the other and both hands clasped over the top leg. The woman on the left is smiling, while Patti looks more serious.

Laura Clancy is about to start studying for an MA in Gender and Women’s Studies and Sociology at Lancaster University. She tweets prolifically at @Laura__Clancy and blogs occasionally at cynicalscribbles.wordpress.com