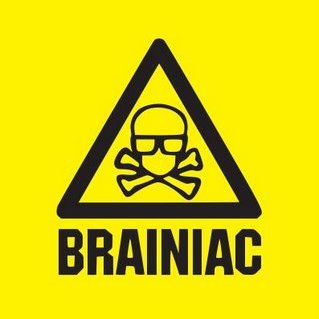 Brainiac: Science Abuse was a TV staple in my house during my early teens. And as much as I’d love to credit the programme with inducing an epiphany in my 13-year-old mind and sparking my ambition to embark on a physics degree, I’m not sure that’s quite what happened.

Brainiac was the show that made science cool. Seemingly popular with everyone, I even remember watching an excerpt where caravans were blown up using acid/alkali metal mixes in science class.

So what’s my gripe? Well, looking back, now older and hopefully a little wiser, I’m not a great fan of the programme’s depictions of women. Indeed, one of Brainiac‘s own introductions synopsises rather nicely:

This is Brainiac, the show… That’s a bit like GCSE Physics, but with more girls in bikinis… And less physics.

So let us take a look at Brainiac‘s ‘girls’. The first who comes to mind is the buxom Brainiac Nurse, to whom Jon Tickle pays a visit to ask: “I’m bored – what things can I do with my body?” The nurse, in her miniscule uniform and plunging neckline, suggests something which either feels weird, or which one cannot ordinarily do with one’s body, to keep him occupied.

Next in line is the addition to recent series, ‘How Hard is your Thing?’ where a high-heeled Thaila Zucchi, also sporting rather fitting clobber, proclaims that she loves “hard things.” She then proceeds to drop said hard things from a height to see just how hard they are. One instalment‘s hard thing is a radiator, to which Zucchi puts her licked finger, with accompanying “hsss”. This could almost be a spoof, but I suspect the program is not indulging in self-satire.

Both Thaila and the nurse are in the minority in that they have speaking parts. One in the non-speaking majority is Rachel Grant donning a bikini (as promised!) and grass skirt as Professor Myang Li. When Grant is on-screen, a narrator asks viewers whether a “juicy” fruit (e.g. a melon) will sink or float in water. Of course, that’s the funny bit, because the camera slowly pans over her ample bosom before reaching the fruit she’s holding.

While women’s bodies on the show may be very much in the forefront, the women themselves are in the periphery in terms of the science

Other women who don’t speak are the “Brainiac Babes”, a scantily clad quartet who blow things up. In this particular clip, one is wearing a PVC catsuit and a camera angle borders on being an upskirt shot. After they’ve finished causing explosions, they all remove their tops as they walk into the sunset: something which I too find helps to consolidate my discoveries after a hard day in the lab.

One of the questions that Jon Tickle poses in Brainiac is, “Is it harder to concentrate around beautiful women?” before proceeding to give us this answer:

When a man catches sight of an attractive woman, his animal instincts come into play, especially if she is acting in an overtly sexual way. Males of any species are constantly looking for any opportunity to pass on their genes, so being around young, attractive female bodies kick-starts these natural urges, overriding all other behaviour. Beautiful women affect a man’s ability to concentrate.

This reminds me an awful lot of the instance where one of my fellow physics undergrads was told by a guy in our year not to wear a particular dress because it showed off her breasts to an extent that he deemed was “too distracting”. Tickle’s speech also smacks of (and perhaps would give ill-deserved credence to in some people’s minds) the familiar argument that blames women if men find them attractive and act on it in an anti-social way: after all, what’s a man to do when rendered powerless to his animal urges?

The women of Brainiac are sexualised to the exclusion of all else, while saying and wearing very little. The narration that accompanies them on-screen is choc-a-bloc with innuendo and the camera lingers on parts of their anatomy. Worse than this, there are some, at best, questionable messages being sent out about women and, in the aforementioned case, their culpability in men’s behaviour.

While women’s bodies on the show may be very much in the forefront, the women themselves are in the periphery in terms of the science. Their lack of speech corroborates their status as mere eye candy. This itself is nothing new. There are barely-clothed and silent women used for decoration everywhere: adverts and music videos are two areas that immediately spring to mind. A very high percentage of these women boast the Big Four of what our society considers attractive: being white, young, thin and large-chested. Brainiac does not attempt to introduce much diversity either.

It could be argued that the programme entices a proportion of young men to pursue science, but is this a noble endeavour if it alienates women from the field?

So while the women are confined to the background as ornaments, the men get to do all the cool stuff. Admittedly, a small portion of the women on the show aren’t sexualised and are involved in the experiments in the same way as the men; third series occasional host Charlotte Hudson falls into this category. Having said that, none of the men are ever sexualised. And none of them are near-naked for the hell of it either. There’s a definite disparity.

For me, the sting in the tail of this is that women are underrepresented in science, occupying just 13% of STEM (science, technology, engineering and mathematics) jobs in the UK. I’m not about to assert that Brainiac is the reason for this underrepresentation. Yet, it’s not exactly attempting to salve this injustice either. Rather, it frolics around in it with half-naked women. Women being almost exclusively in Brainiac‘s decorative roles serves to portray science as a boys’ club, or perhaps upon viewing Brainiac one might deem the term ‘gentlemen’s club’ to be closer to the mark.

It could be argued that the programme entices a proportion of young men (presumably the target audience) to pursue science, but is this really such a noble endeavour if it alienates women from the field? Along with this, Brainiac‘s use of sex appeal to entice the male audience could be read as insulting to men. Is it not offensive that Brainiac seems to think that men are so driven by their libidos that adorning an, at best, average science show with any number of undressed female bodies is all that is needed to maintain a loyal male following?

Brainiac sends the message that women are just there to be aesthetically pleasing, are not to be taken seriously and have little valuable to say. This is a very dangerous message to be disseminating, especially in light of a recent study’s findings that science academics deemed women “less competent” than men of equal ability and qualification. It’s indeed plausible that this could be happening to me when my work is marked!

Brainiac makes me ask: “Where are the role models for young female aspiring scientists?” because it sure is hard to find them when watching the programme. It isn’t so outlandish to suggest that a young girl viewing Brainiac might question whether she has a place in science. Or, when the culture of science seems to be as it is in Brainiac, does she even want to be a part of it?

My advice? If you’re after some science telly, watch Mythbusters instead which isn’t punctuated by double entendres and women strutting around in ridiculous outfits. In all the episodes I’ve seen, the women do the same as the men: science.

Additionally, Mythbusters‘ science is better. Without even taking reports that some of Brainiac‘s results have been rigged into account, Mythbusters’ hypotheses are tested more rigorously: controls are in place, repeats are done and the scientific method is generally better followed. Conversely, Brainiac‘s experiments tend to change variables other than the independent variable and don’t follow the scientific method quite as well. But, because “beautiful women affect a man’s ability to concentrate,” perhaps this is something that viewers haven’t noticed.

The Brainiac logo used on the cover for the DVD collection comprising all six seasons of the programme. This shows a skull wearing protective goggles, with crossbones, inside a triangle. This is drawn with black lines, along with the ‘BRAINIAC’ title underneath, against a bright yellow background.

Katie Masters is a physics undergrad and, she hopes, future journalist. More of her ramblings can be found at threehalveskatie.wordpress.com