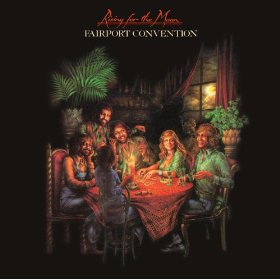 Sandy Denny is an iconic figure in the history of British folk rock. Despite her short lived career, spanning from 1968 to her early death in 1978, she is one of the most high profile female artists to achieve independent fame for her vocal talents as well as her songwriting.

At her best, such as on her most well known song, ‘Who Knows Where the Time Goes’, Denny’s voice is full, textured and highly nimble. At unexpected moments she pushes out her open, husky tones into powerful and moving trills and crescendos that explode the traditional folk tunes she sings with unexpected charge and sexual energy.

Denny, a nursing student from Kingston-Upon-Thames, joined her first band, Fairport Convention, in 1969 as lead vocalist, helping them to make electric covers of traditional songs.

Her writing and vocal contributions, along with guitarist Richard Thompson, are seen as a key component to Liege and Lief, the band’s most successful album. Very soon after, Denny left to start her own band, Fotheringay, and it was then that she gained fame for ‘Who Knows Where The Time Goes’, as well as continuing to make thrilling, freely interpreted covers of old British songs, like her psychedelic take on ‘Gypsy Davey’.

In the years that key players Denny and Thompson were pursuing their solo projects, Fairport struggled, producing a slew of, in my opinion, quite rubbish albums. The overworked and impoverished band with its ever-changing line up had run out of new material, becoming that cliché: a staid early 1970s folk-rock act featuring only men with very long hair and beards.

And so it was with great relief and anticipation that the band and their fans welcomed Denny back for 1974’s Rising For The Moon. It was the first Fairport album to feature only original material – the vast majority Denny’s. And this 2013 reissue features a live performance at the Royal Albert Hall and several of Denny’s demos, only recently released to the band by their label.

Which is all a shame, given how disappointing the album is. The opener, ‘Rising For The Moon’,has an exhausted quality to it from the start, with a really plodding rhythm. Denny seems to be making a defeated, uninspiring sounding complaint about the pressures of life on the road: “I travel over the sea and ride the rolling sky/ For that’s the way it is, that is my fortune/ There are many ears to please, many people’s love to try.”

One thing I really did enjoy about this recent re-release were the liner notes, complete with revealing interviews and reviews from the time it was released

‘Denny’s other original ballads on the new release seem quite contrived; take an acclaimed song on the live bonus disc (on the Deluxe Edition), the long, clumpily meandering, ‘Solo’, about the act of going solo, which also features – you’ve guessed it – a really long guitar solo. Denny’s usually rich poetic imagination seems to have hit a wall on the three times repeated chorus of, ‘I’ve just gone solo/ Do you play solo?/ Ain’t life a solo?’. In case this doesn’t make it clear, Denny was thinking of dumping the band and going solo at the time, subsequently releasing four more interesting albums under her own name up until her death.

The frenetic rhythms and unexpected chord changes provided by Richard Thompson on Liege and Lief in songs like ‘Tamlin’ are gone. The songs plod forward predictably and Denny’s lyrics lack the subtlety and commitment of her work with Fotheringay.

Both the writing and studio performances all round are lacklustre. Like many albums from the early 70s, Rising For The Moon is replete with a deep sense of nostalgia. There’s nothing particularly wrong with this, but Rising For The Moon‘s nostalgia is not one of an intense or moving, or even particularly sad kind, especially when compared with Richard and Linda Thompson’s 1973 album, I Want To See The Bright Lights Tonight.

This is most obvious in the live performance section of the reissue, with the cover of the Thompsons’ ‘Down Where The Drunkards Roll’ of the Bright Lights album. Where Richard and Linda Thompson’s vocal performances are crystal sharp and poignant, in comparison Trevor Lucas’ lead vocals are tonally flat, and Denny’s backing trills wander in and out as though she is being woken up to sing against her will.

One thing I really did enjoy about this recent re-release were the liner notes, complete with revealing interviews and reviews from the time it was released. Denny offers a very candid reason for why she re-joined Fairport despite fronting her own successful project. Her husband, Fairport and Fotheringay guitarist and singer Trevor Lucas, had recently rejoined Fairport and was touring extensively with them. Sandy only rejoined because, ” quite Frankly, I just missed Trevor so much”. This doesn’t come across as wholehearted career enthusiasm.

Which might go some way to explaining why Denny’s voice, usually so gripping and entrancing, has little tonal variation over the album. There is tiredness and a sense that she is relying on her reputation as the band’s front person to mask a decided lack of creative or emotional commitment to working with Fairport again. For Denny, it seemed Fairport had become a boring day-job, taken merely to support her family.

Another reason for the band’s general lack of energy is suggested by the fact that they were hoping to finally achieve some much needed commercial success with Rising For The Moon. Denny hints at this in her complaint in the live performance of ‘Who Knows Where The Time Goes’, where she wryly jokes that the song is “the only one that ever made me any money, so it’s a good job I wrote it”!

The re-released live performance is definitely an improvement upon the original album. This did achieve some critical success, but none financially, leading quickly to the final break-up of this particular line-up soon after the release, with Denny never returning. The live performance on disc two perks up a lot, especially on traditional covers of songs like ‘She Moved Through The Fair’, and demonstrates how great a performer Denny and the other band members – Lucas, Dave Pegg, Dave Mattacks and Dave Swarbricks – could be in better times. But although it was is a relative success for the rest of the band compared to their more recent output, ultimately Rising For The Moon is a disappointing album by Denny’s standards, made for mundanely sad reasons and with unenlightening results.

Image is the sleeve design accompanying Fairport Convention’s Rising For The Moon album. The sleeve shows a highly stylised portrait of the group depicted in mediaevael style dress seated around a table in what appears to be a dark tavern. Ferns can be seen in the background

EDIT (11 July 2014): Regarding ‘Solo’, this review previously stated that “Denny’s other original ballads seem quite contrived; for example, take the album’s most acclaimed song, the long, clumpily meandering, ‘Solo’…” As pointed out in the comments below, this track does not actually appear on the general release of the album, only the live bonus CD on the Deluxe Edition. This is now reflected in the edit above.

M lý-Eliot is a singer and folk music enthusiast, and an unashamed fan of Richard and Linda Thompson. She is currently researching vegetarian food in Vietnam for her blog, wordpress.com/thejadecave.