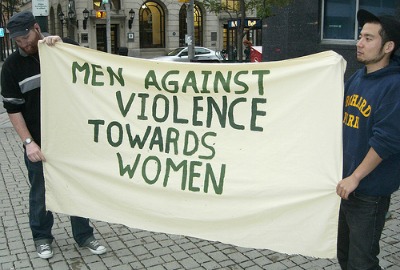 On power, voice, and male feminists

“The best thing a man can do when a woman is speaking is shut up and listen,” says Dad Who Writes in a recent blog post explaining why, in his words, he is not a feminist, continuing: “And if you call yourself a feminist and a woman gives you a slap for it, button your lip and take it like a man.”

Dad Who Writes, or Gabriel, bases his argument on a power analysis, which, at first glance, is quite convincing. “A feminist may well be an ‘advocate of women’s rights’ but advocacy without an analysis of the power relations between the advocate and those that the advocate intercedes on behalf of risks becoming patronised at best and fatally compromised at worst.” Very well – let’s not speak for those whose shoes we’ve never walked in.

The dad blogger then moves on to an analogy with international relations, where male feminists become Western nations providing aid to former colonies in the developing world and women, thus, become said developing nations, his point being that it’s all based on a ‘we are going to save you’ and ‘we know best’ attitude, while, really, the Western world still owns the oil fields, if you like. “If feminism is anything, it’s disruptive of the established order. Let the established order speak for feminism and it’s game over,” writes Gabriel, concluding: “If you speak on behalf of the voiceless, you continue to deny them a voice.”

The oil thing perhaps isn’t that far-fetched: in a way, men – or, white middle- and upper-class men, I should say – still very much rule the world. But it’s a bit of a leap to compare male feminists to aid-giving, oil-owning former empires. Actually, you need to make quite a handful of massively puzzling leaps in order to make sense of that argument.

“If you are a man and you call yourself a feminist, you’re colonising a place you have no right to,” writes Gabriel. But joining the feminist movement is not the same as colonising it: you can subscribe to all its ideals and goals without in any way suggesting that you know better – in fact, joining forces to proactively work towards those very goals seems like the opposite of know-it-allism.

Moreover, in order for the international relations analogy to add up, you, as a man, would need to view yourself as some sort of spokesman of patriarchy; unless you are a representative of the established order, saying that it mustn’t speak on behalf of feminism is, well, completely and utterly irrelevant at best. We may all be entangled in the structures of patriarchy, but it’s highly questionable whether each and every man can be seen as possessing the same amount of power over the future of it as a Western nation does in regards to international relations.

Dad Who Writes is not a feminist, because he doesn’t want to deny women a voice. But nowhere have I ever read about feminism as a movement through which one must shout across one’s allies, denying fellow advocates a voice. If this is Gabriel’s reason for refusing to call himself a feminist, I’m at a loss. To use a tired but forceful analogy: I’m pretty convinced this same logic wouldn’t prevent the blogger from identifying as anti-racist, would it?

If you don’t like the idea of equality, by all means, don’t call yourself a feminist. But don’t use intellectual arrogance to try to dress it up as noble decency. Let’s be straight about this: feminism has a bad enough rap as it is, and the last thing it needs is for more people to distance themselves from the label. If anything smells of patronising former empire style behaviour, it’s telling the girls that they’re doing a grand job and to keep on marching – while you sit back, acknowledging your male privilege, and watch.

Image, by Flickr user Toban B., is of two men at a Take Back The Night March in London, Ontario, Canada. They are holding a large sign saying “Men Against Violence Towards Women”. Used under a Creative Commons License.