Same-sex marriage, ciswash and a call to continued solidarity

In my open letter to Lady Stowell, the Government’s Conservative representative in the Lords for the marriage equality bill, I detailed numerous reasons why the bill demonstrated contempt for the equality and marriages of trans people and the harm that it would do.

I didn’t cover everything. I didn’t cover the way that it conflicted with the Gender Recognition Act which is the major legislation by which trans people are enabled to have any rights whatsoever in our society. The Gender Recognition Act protects the right of a stealth trans person to absolute privacy and certificates issued under the Act state that the holder is “for all legal purposes” their affirmed gender (that is, the gender in which they feel comfortable).

I didn’t mention the disturbing context into which these clauses fell, regarding the recent ruling of the Appeals court that a trans man is supposedly so different from a cisgender man under law that failure to disclose one’s medical history before engaging in intercourse is tantamount to rape; it ‘vitiates consent’ unlike actively lying about your religion, political affiliation and, most distressingly of all, marital status. 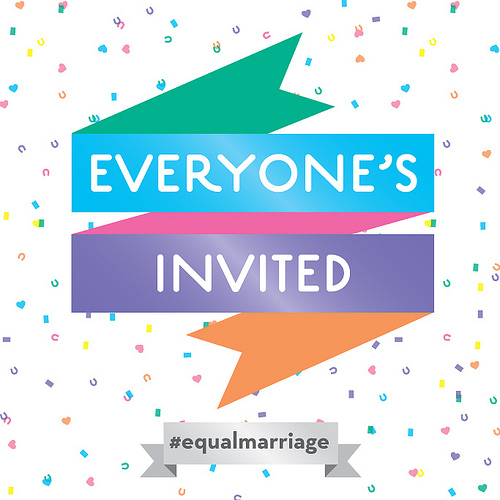 I didn’t mention the many other problems with the bill that trouble me not as a trans person but as a Christian in a same-sex relationship, which I hope someday to formalise in the sacrament of marriage, not least of which is the enormous difference in the fee charged to venues wishing to register to provide same-sex marriages than those wishing to register to provide opposite-sex marriages. I also omitted the power of any faith organisation, regardless of seniority, ownership, size, or frequency, which uses the venue, to veto a registration to provide same-sex marriage, effectively setting the right for bigots to be insulated from the impact of our liberation.

In my letter, I asked Lady Stowell to perform one small act of her democratic duty by allowing a debate that was cut short by her lack of preparation. Instead of this, the noble Lady failed even to respond.

Therefore, when I was at Westminster last month on Monday, representing pro-equality faith groups, I took the opportunity to chat with several Parliamentarians about the rights of trans people and, more specifically, the issue of ‘Spousal Consent’ (a regulation added by the Bill wherein trans people would be required to get written permission from spouses in order to apply for a Gender Recognition Certificate).

At the time of these conversations I was not planning on writing this article, so I feel that it would be unfair to attribute any quotations to specific individuals. I will however report that, as far as I was aware, those Peers and MPs taking the time to express their support to those of us gathered there were overwhelmingly Liberal Democrats.

Among those I spoke to, three particular incidents remain with the greatest clarity in my mind. The first is a Peer who told me that trans rights were next, that we have not been forgotten and that work was underway to identify what it was that the trans community wanted or needed in order to approach greater social equality. This was wonderfully heartening.

The very next person I spoke to, however, appeared confused by the very word ‘transgender’ and said that he felt that same-sex marriage was enough to be going on – not so encouraging. Finally, I spoke to an MP who had been on the committee for the bill who reported that Stephen Williams, Lib Dem MP for Bristol West had been frustrated by refusals from Number Ten whenever it was asked to listen to reason and make this a bill that was about equal marriage not just same-sex marriage.

My source described the PM as wanting to keep the bill as a same-sex marriage bill and rebuffed proposals to remove transphobic content on the basis that it would grant trans people new rights. Proposals to introduce opposite sex civil partnerships were met with what one MP called “pig-headedness” from Number Ten and likewise recognition of humanist ceremonies was offered no consideration in this supposedly single-issue bill. David Cameron is not an ally to the Lesbian, Gay, Bisexual, Trans community, and to those who have been taken in, I would point, for example, to his political motive for this bill, the bill’s narrowness and inadequacy on almost every count, and the way it emphasises the right to be a bigoted person of faith over the right to be an LGBT one.

The group that gathered outside the Lords was dominated by Stonewall, a well-known campaigning charity which calls itself the ‘Lesbian, Gay and Bisexual Charity’, except in Scotland where transgender people and our rights are also included in their campaign objectives and subtitle. Stonewall has faced heavy and not unjustified criticism from many sectors of the trans community, and many LGBT campaign groups for ignoring the needs of the very people whose predecessors led the riot from which it takes its name, and for numerous egregious errors, including an incident in which it released an anti-homophobia video for schools, including a section about trans children which claimed that the transphobic slur “tranny” was merely an abbreviation. These issues have earned it the contemptuous nickname among trans people and many of our allies of ‘S’onewall’ (no ‘T’ in S’onewall). 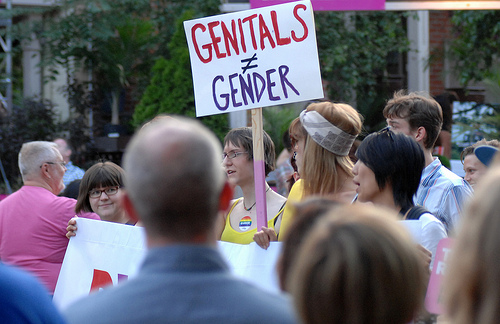 When the bill passed the third reading in the Lords I was overjoyed. Someday my partner and I will hopefully utilise this law to marry. S’onewall must be thanked for all their hard work in making that a possibility for us. I just hope that the transphobic content has been amended out by then. There is something sickening about having to use a law that oppresses transgender comrades in order to sanctify same-sex relationship before God.

And that is the issue at hand here. I have yet to hear one news report, read one article, one statement from a parliamentarian or LGBT organisation that even acknowledges the serious problems in this bill. With the exception of the personal blogs of trans friends and, interestingly, the Anglican LGBT group Changing Attitudes’ website, not even the LGBT press are addressing this issue (at least, not until Peter Tatchell spoke with PinkNews and GayStarNews, although he then suggests that this bill is a step forwards rather than backwards for trans people). And that frightens me.

Trans people have fought alongside LGB people as fellow LGB people and allies. Can trans people expect LGBs to return the favour? If, in the future, a small concession in LGB rights were to be required for a significant progression in trans rights, would S’onewall remain silent or would they do everything in their considerable power to derail that progression out of simple self-interest? I like to believe that they will follow Peter Tatchell’s lead and actually fight with trans community, as we have with the LGB community.

However, many of my trans friends and allies doubt it very much. All too often the rights of someone to actively oppress another supersede the right of their target to evade that oppression. The opening paragraph of this article details the most recent and relevant examples of this. Another similarly distressing trend is for oppressed groups to achieve some legal aspect of liberation and become the knowing and willing oppressor of their former comrades in fear that reciprocating the alliance they had previously enjoyed would cost them more than they could spare.

So here I am, asking, now that we have fought with you and won with you this advance, for which we have sacrificed much, will you help us get back what we willingly gave to help in that cause? I address this plea to all LGB people, and perhaps most especially to S’onewall.

Sometimes it is suggested that the criticisms levelled at S’onewall are unfair, and that it is reasonable for a charity to have a particular area of focus for their work. To this I respond by pointing out that S’onewall willingly accepts donations that the giver expects will help LGBT (not just LGB) people ; sometimes S’onewall chooses to advance LGB equality in a way which prevents the same progress for trans people and have on numerous occasions done things which have hindered the journey trans equality.

S’onewall is looked to for advice about LGBT issues, including the ‘T’, and when they miss the ‘T’ out people think that must mean it’s not important. S’onewall gave noted professional transphobe Julie Bindel an award. S’onewall produces a highly respected, definitive guide to the best universities and graduate employers for LGB people, and as a result there is rarely if ever any pressure or motive for those organisations to look at improving their treatment of trans staff and students.

Perhaps the most vulgar thing is that S’onewall are named after a riot led by trans people, among whom were some LGB people who were facing similar intersecting oppressions. This has subsequently meant that people wanting to support that whole community are justified in assuming that giving money to S’onewall would also help in the fight for trans liberation.

And so, in frustration and desperation, I call for continued and reciprocated solidarity. I call for Stonewall to live up to that name and the heavy responsibility it carries to represent trans people alongside LGB people, just as trans and LGB people have been a united force ever since that fateful evening in Greenwich Village, New York City when they formed kick-lines in the street to resist the oncoming oppressor. The time has come for Stonewall to reinstate the ‘T’; appoint (or, better still, elect) a trans representative to your board.

Finally we have same-sex marriage. I am thrilled. I would be more thrilled if I could feel that as a trans person I have the support of my cis LGB brothers and sisters just as they have mine. It is our turn. Do not desert us in our hour of need.

Reubs describes themselves as a pseudopansexual genderqueer. Their mother has Multiple Sclerosis, and their father has been absent since Reubs was aged 9. Reubs has Asperger’s Syndrome and has always, in some way, expressed themself as queer. Reubs is about to begin studying an MSc in Cognitive Neuroscience at Birkbeck College, University of London.