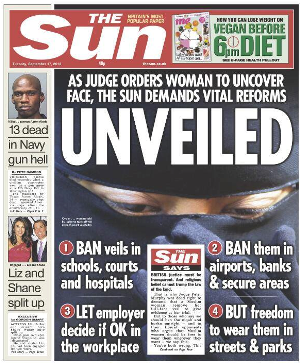 The veil debate: why we must respect the autonomy of all women

By Raisa Kabir. Raisa is an art activist, and has written on dress, cultural appropriation and South Asian and Muslim identity. She blogs here and tweets here.

The past ten days has seen a resurgence in debates around the practice of a minority of Muslim women who choose to wear the full-face veil in the UK. This backdrop ranges from racist bills being heard in the House of Commons, to a niqab ban at Birmingham Metropolitan College, which was swiftly revoked last week, to numerous MPs calling for national debate over its place in schools, courts and workplaces. Both David Cameron and Nick Clegg back debates on whether the niqab has any place in our British classrooms, and the media has turned into a frenzy of unadulterated opinions.

Everyone seems to be commenting on how women should and should not dress, yet no one is consulting women themselves – too brainwashed I suppose? Muslim women’s voices seem drowned out, as their representation in the media consistently conflates the veil as a “symbol of oppression, not one of liberation”. This damaging stereotype is continuously pulled out, when arguments on both sides are much more nuanced than just defending freedom of expression, against security. It is much more about further limiting the visibility of Muslim identity on our streets and in our schools.

I am a Muslim woman, but I do not particularly favour wearing the veil, yet I respect any Muslim woman’s autonomy to do so. I do not think face covering automatically equals oppression. Often it is Westerners who project oppression onto others, to create imagery that fits current discourse in our political climate, mixed in with of course some “white saviour” complex. Yet I recognise that the veil in its various forms is used for gender segregation in parts of the world where women have very low human rights, unlike here in the UK. That is a true undisputable fact, but more indicative of regimes and patriarchal states that interpret Islam that way, which go on to legislate what women can and cannot wear. Banning a garment feeds into this very same logic – men policing women’s bodies, again.

I don’t support a ban, as that’s not going to help anyone who didn’t want to wear one in the first place. Banning the niqab in schools won’t help those who are forced to wear one. More likely it means they will inevitably stay at home, and not be allowed to participate in further or higher education. Students will be encouraged to go to gendered Islamic schools, which could push young Muslim women further away from “fully participating in society”.

The minute we start creating legislation on a widespread ban, or advocating that individual institutions have the right to make women unveil on their campuses or in their classrooms or workplaces, we are creating a geography where Muslim women’s bodies are not welcome in certain places, and police where they can and cannot venture.

Young women who wear the veil at school and college are doing so of their own volition, going to college and university and doing rather well. It is a deeply personal religious choice we have to respect. A woman’s autonomy to choose how to dress and adorn her body, if it does not impinge on anyone else’s rights, should be entirely her choice. That’s the thing about patriarchy, it still wants to control how little, or how much clothing a woman can wear, and what the political contexts of gender and dress mean.

Why would a Muslim woman choose to wear a veil in the UK, when in parts of the world, women are legislated to cover by the state? A feminist Muslim perspective could see this as a way to retrieve public space around their bodies, where the jilbab and niqab connote power in rejecting the male gaze – that’s an incredible tool.

The Sun paper, which is the target of the “No more page 3” campaign, rolled out a front page headline (see above) demanding the veil be banned in a roster of public places. Instinctively highlighting how the colonial gaze of the western man sees the “unyielding” veiled woman, in the words of Frantz Fanon, “it frustrates the colonizer” where the white man seeks to strip the Muslim woman of her veil; historic references of colonial rape, and forced violation come to mind. Women’s bodies are there to be looked at; resisting or doing otherwise is an assault on patriarchy.

However, the simplistic view that feminist Muslim women are anti-porn leaves the women who choose to be page 3 models and sex industry workers posited as the antithesis to the “oppression” of Niqabi women, and signifiers of “liberation” – à la Femen, which is a highly dangerous analogy. This debate must not pit pious women against women who use their bodies autonomously also.

Dehumanizing women who wear the niqab is not the answer. Shaming women who do not cover isn’t the way forward either.

The fact remains we still live in a capitalist, patriarchal society, where women are still at risk from sexual assault whether you wear a niqab or not. Muslim feminists and western feminists need to listen to each other as sisters, to create and build solidarity, in order to smash the high walls of sexism and racism.

The image shows the front page of The Sun from Tuesday 17 September. Over a close-up of a woman’s face covered except for the eyes is the text “AS JUDGE ORDERS WOMAN TO UNCOVER FACE, THE SUN DEMANDS VITAL REFORMS. UNVEILED. BAN veils in schools, courts and hospitals. BAN them in airports, banks and secure areas. LET employer decide if OK in the workplace. BUT freedom to wear them in streets & parks.”