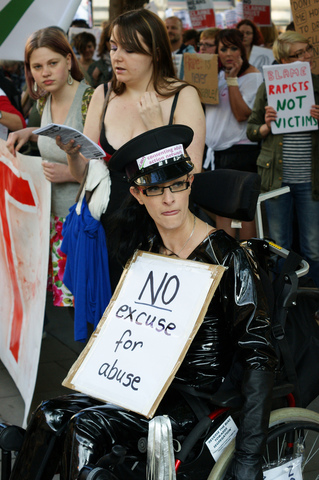 I’m a sexual health worker who, among other things offers support to schools around sexual and gender orientation. Once in a while, we get a request to go into a school because a pupil is struggling with sexuality issues*.

No problem. Does the school want some LGBT awareness sessions for the kids? Perhaps some training around tackling homophobic bullying for the staff? No, as it turns out.

“We were wondering if you could come in and have a word about personal safety, and encourage them not to go around TELLING people, as we’ve had trouble in the past with pupils with sexuality issues putting themselves at risk, as well as causing a lot of disruption in classes by being too… flamboyant“.

Yes, in many classrooms in the UK, the onus is on the victim of homophobic or transphobic bullying to ‘solve the problem’ for the school.

And to be honest, I can sort of see why.

See it from the head teacher’s perspective. They could acknowledge that their school has a huge, systemic failing: that teachers aren’t trained to recognise and challenge homophobia and transphobia, or even vetted to prevent those with hostile attitudes towards LGBT people from working in education. That a generation of teachers who taught during the Section 28 years have actively been encouraged to avoid LGBT issues and turn a blind eye to homophobic bullying. That, for the same reason, younger staff never saw their own teachers calling out homophobia and transphobia when they were at school, and don’t necessarily see it as part of the job. That pupils are often very used to hearing and joining in with casual and targeted homophobic and transphobic slurs with out any fear of consequences whatsoever.

They could take on the mammoth task of effecting a total cultural change, with all the training, consultation, hostility and backlash from staff, students and wider community that this would entail. They could do that.

Or they could deal with one lone voice: the queer kid who has chosen to come out. A kid who’s probably lacking support at home, who’s lost friends and made enemies by disclosing their true identity, who is looking to them for help. At an intensely vulnerable time in this kid’s life, how much easier, cheaper, better – to simply urge them back into the closet; into isolation and denial? After all, it’s just one kid, right?** You can’t expect an entire school to change its culture for just one kid…

Yes, I can see where they are coming from, these schools. 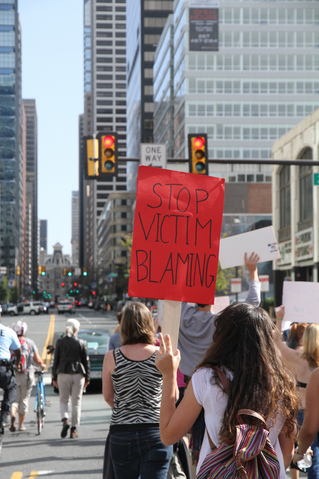 Because the thing about victim blame, the thing we forget when we decry so vociferously, is how easy it makes life for those in power. How safe it makes those who are powerless against oppression feel, at least for a short time.

Just think, if we could only frame every injustice as being the fault of the oppressed and not the oppressor, how much less frightening and overwhelming our world would seem.

Got a problem with rape and sexual assault in your community? Terrifying, right? But put it down to women getting drunk and wearing short skirts and walking alone at night and voilá! Easy fix!

Recommending below the knee skirts, curfew and abstinence from alcohol to women seems like a far more achievable goal than finding out why so many men see sexual consent as an optional extra. Plus, following those simple rules (“Watch your drinks! Stay in a group! Don’t be slutty!”) can give women who haven’t been attacked yet a comforting sense of security. Like staying in the closet to avoid homophobia, modesty and vigilance can feel like talismans, protecting the faithful from ridicule, censure and assault. Of course, those things happen anyway but the idea that the victim could – and by extension should – do something to prevent oppression is understandably alluring. Both to those who are exonerated of all responsibility when the focus is placed on the victim’s behaviour and not their own, and those who are given the cruel, false hope that if they only did this, wore that and avoided the other, if they only, in fact, stayed quiet and out of sight, they would, somehow, be safe from harm.

It’s the same story with race (“They won’t integrate!”), class (“They’re brash and intimidating!”), gender identity (“They don’t pass!”) you name it. If there’s a problem, there is a way of blaming it on the visibility of person or group with the least power in the equation, and dressing it up as that person or group being given the chance to take hold of their own destiny, to pull themselves up by their bootstraps, to just stop placing the blame for their oppression on a deeply flawed and inherently brutal society!

The victim blame narrative is a powerful and seductive thing. It absolves the privileged and protects the status quo. You can see why so many people are invested in it.

* Read ‘has come out at an inconvenient time for us’.

** Not just one kid who’s queer, of course, but just one who is inconveniently courageous enough to be speaking up.

[The first image is a photograph taken at Slutwalk Manchester. It features a group of people, at the front of which is a wheelchair user in a police-style hat and black clothes holding a sign reading, “NO Excuse for Abuse”. The second photo was taken at Slutwalk Philadelphia. It shows several people from behind, one of whom is holding a red, handwritten sign reading “Stop victim-blaming”. They were taken by Phil King and Amanda Capasso respectively, and are used under Creative Commons Licences]