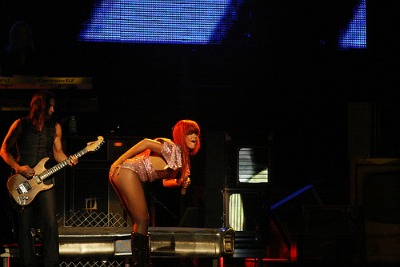 We need to talk about talking about Rihanna

There’s an assumption that Rihanna, being a public figure, has a responsibility towards us all. The singer has become a role model for young girls, and she should behave as such. What’s interesting is that behaving as a role model, apparently, is not so much about behaving, but rather about dressing. Actually, let me rephrase that: behaving as a female role model is all about looks; if you’re a female pop singer, you’re responsible for teenage girls dressing like sluts. (Let’s not even get into the subject of slut-shaming – there’s only so much space in one blog post.)

That Rihanna is a singer and has done incredibly well as such, winning awards, selling millions of albums, making a bucket-load of money, seems an easily-forgettable fact. That she’s done so in the context of a music industry that loves her more for her well-shaped arse, full lips and willingness to stick an umbrella between her legs in a music video seems easier to remember, yet somehow always twisted and thrown back in her face.

If I had a daughter, I’d want her to admire other women for what they do, not how they dress; I’d want her to feel, genuinely, that she can do whatever she wants and be whoever she wants without having to strip down to her knickers; and equally, I’d want her to be able to bare as much skin as she likes without anyone telling her to cover up. Unlikely, I know – but I don’t for a second believe that Rihanna is to blame. And this is why we need to talk about talking about Rihanna.

Whether or not it makes sense to expect of a pop singer to take responsibility for all the teenage fans who deify her and make her into their untouchable role model, it’s undoubtedly ill-advised to keep bringing everyone’s attention to said role model’s skirt or tits or make-up. If Rihanna’s responsibility as a role model is to cover up and look respectable, our expectations of the next generation of girls sure are underwhelming. They’ve got a role model who’s set her mind to something, worked hard, and done well – and all people will talk about is her inability to put her boobs away and stop twerking. Want to do well, girls? Be nice. Zip up. Keep those legs crossed and smile innocently.

There’s nothing like a scapegoat to make people feel better about things: just someone, anyone, to blame for everything that’s wrong with the world. But Rihanna grew up in this world too, shaped by the very structures that made her dress sense a public concern in the first place, and telling her to put some clothes on and stop dancing around like a slut is just some twisted kind of precautionary victim blaming where, yet again, we’re just denying a woman the right to control her own life.

I promised myself recently to stop commenting on other people’s weight, to stop saying thank you when told that I’ve lost weight and to stop talking about food as an unnecessary evil that’s always either a naughty treat or something to be consumed in as small amounts as possible. Not because I think it will rid the world of all its body image issues, but because I think it might be a start.

We can’t regulate Rihanna’s wardrobe, nor should we want to – but we can remind our children that her wardrobe is unimportant by giving up talking about it. If language represents and recreates society, a little more talk about the things we do might just do the trick.

Picture, by Eva Rinaldi on Flickr, shows Rihanna performing on stage with a guitarist. Used under a Creative Commons License.