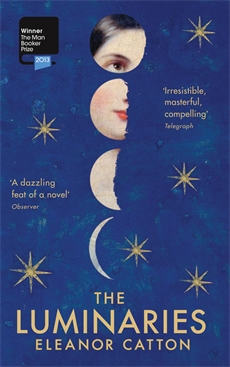 A Looker Wins The Booker

This week, Eleanor Catton became the youngest ever winner of the Man Booker Prize with her epic novel The Luminaries. At only 28, there was bound to be some comment about the age of the author, but the Times (via @forbookssake) seemed to forget that this was a literary prize:

“…when Catton stepped nervously into the spotlight on Tuesday night, bookish girls everywhere had a new kind of role model. She’s a chick, but nobody could mistake her work for any kind of chick-lit; this young woman has been recognised for being a genuine artist; The Luminaries emphatically does not belong with the interchangeable fiction on the three-for-two table.”

It’s a good job that Catton is a natural blonde. If you were going to write an 852 page novel before the age of 28, there’d be no time to maintain your roots.

“She’s an unashamed nerd, positively reeking of the library, but with a pretty, user-friendly Glee-like nerdiness; just the sort that’s fashionable among clever teenage girls who don’t aspire to be Katie Price.”

When teenage girls are looking for a role model, these are the two directions they can go in. One is the busty glamour model, the other is a writer who wears specs but is still thin, blonde and cute. No teenage girl is going to see Catton win critical acclaim with an epic novel and think, “Wow, writing serious books isn’t just for old men. Maybe I could do something like that?” They’re going to think, “Now, that’s a look I could work with.”

The Times may as well have illustrated their article with one of Buzzfeed’s stock photos of women reading. Women authors, even when they win one of the world’s most prestigious fiction prizes, are not taken seriously.

Women buy and read more books than men and the best-selling novels of recent years are by J K Rowling and E L James. Yet men’s books are more likely to be published and reviewed in in literary magazines, newspapers and on review programmes. It is men – usually white, straight, middle-aged and middle-class men who dominate the podiums (or perhaps library steps) of literary prizes. Many of our best-selling women authors feel it necessary to write under gender-neutral or masculine pen-names.

Earlier this year, Young Adult author Maureen Johnson responded to regular complaints from male readers that the girlie covers, that she had no control over, made Johnson’s books impossible to read in public. The results of the Coverflip challenge, where readers redesigned the covers of classic books as if they were written by authors of another gender, are a powerful illustration of the assumptions made about a book with a woman’s name on it.

Male literary giants are often happy to defend the status quo, with V S Naipaul talking of women writers’ “narrow view of the world” and in a recent interview, David Gilmour (no, the other one) defending the absence of women on his literature course at Toronto University with:

This isn’t about what women write about, but what women are assumed to be writing about. When Hilary Mantel spoke last year about the historic and current media treatment of royal women’s bodies as ornamental baby-making machines, the content of her speech was widely ignored and she was attacked for bitching about Kate Middleton’s body – the sort of the thing a woman is, apparently, expected to do.

Eleanor Catton herself talks about the way women writers are regarded, in a Guardian interview this week:

“I have observed that male writers tend to get asked what they think and women what they feel,” she says. “In my experience, and that of a lot of other women writers, all of the questions coming at them from interviewers tend to be about how lucky they are to be where they are – about luck and identity and how the idea struck them. The interviews much more seldom engage with the woman as a serious thinker, a philosopher, as a person with preoccupations that are going to sustain them for their lifetime.”

I hope that Catton does get to be a role model to girls and young women, but as with her literary success, this will have nothing to do with what she looks like.