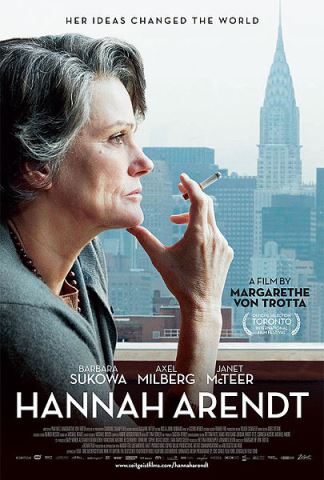 As I was watching Hannah Arendt, the most recent film by established German director Margarethe von Trotta (Rosenstrasse, Rosa Luxemburg), I was wondering how (if at all) it is relevant for British audiences. After the film opened in New York in May, it has unleashed fierce discussion in the US and European press, somehow mirroring one triggered 50 years ago by Arendt’s coverage of the Jerusalem trial of the notorious war criminal Adolf Eichmann.

The biopic is set in intellectual circles of the early 1960s New York, where American academics and writers mingle with war refugees from Europe who escaped Nazi persecution as Jews or Marxist thinkers. Large parts of the films are in German, both as expats turn to their mother tongue in the passionate exchanges and in the flashbacks from Arendt’s university years in Germany.

I was wondering whether ideal audience for the film should be well versed not only in the 20th century European history but also in the history of ideas and so-called “Continental” philosophy, in the UK shoehorned to a few university departments and not even considered “philosophy” by some analytic philosophers who dominate English-speaking world.

The answer is, not necessarily. For those willing to dig deeper, I recommend the excerpt from The New Yorker’s archive, including some background and part of Hannah Arendt’s original essay from 1963. The New York Times’ blog The Stone offers a philosophical take on the nuances of the Eichmann’s trial and Arendt’s reasoning while others focus mainly on the fact that Arendt was, in the light of newer research, wrong about Eichmann’s motivations.

Heavy philosophical debates aside, what remains is a story of an extraordinary woman philosopher, audaciously played by Barbara Sukowa, who was brave enough to think and write against the surrounding political climate and her friends’ advice. Janet McTeer as Arendt’s American friend Mary McCarthy delivers a great performance too and the film is well worth seeing.