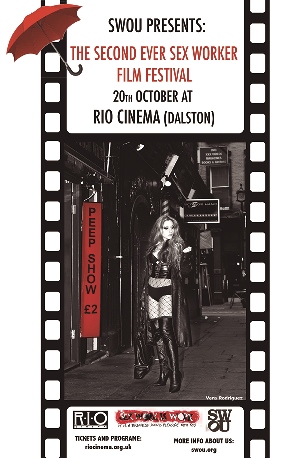 The Second Ever Sex Worker Film Festival in London

Sex Worker Open University (SWOU) is proud to present The Second Ever Sex Worker Film Festival that will take place this Sunday in Rio Cinema in Hackney, London.

I’ve chatted to Luca Stevenson, SWOU’s co-founder currently based in Glasgow, involved in the First Ever Sex Worker Film Festival in 2011, and Pony Mac from London, involved in this year’s edition.

Please tell us a bit about Sex Worker Open University and what it does.

SWOU has three branches (London, Glasgow and Leeds) and all are made up of current or former sex workers. SWOU organises stigma-reduction workshops and panels with the public all around the UK, skill-sharing classes for other sex workers. We organised a five day conference in Scotland earlier this year and most recently, SWOU has set up Confide, a free phone service for sex workers to call if they need safe, confidential support.

Looking back at First Ever Sex Worker Film Festival in 2011, did it meet the expectations you had for it?

The first Film Festival was an amazing success. Not only because we sold out (425 tickets sold, many people could not get in!) but because of the celebratory atmosphere of the event. We met many new sex workers, some of them became involved in SWOU and are now amongst the fiercest sex workers’ rights activists in UK! The event received good media coverage and I remember one of the reviewers, a local green councillor, writing: “The Film Fest brought more questions than answers”. And this is what SWOU is all about! Sex work is full of contradictions, questions, lives hidden and stories untold. Don’t believe fundamentalists (either religious or feminist) who say: “Prostitution is violence, prostitution is immoral”. Sex work is what feeds millions of people around the globe, it’s time people really listened to our stories!

SWOU is all volunteers; most of us are current sex workers, some of us are students, single mothers, artists or involved in other activism projects. We sometimes don’t have the time and energy to run all the events and projects we would like to. We were very focused on establishing the Glasgow branch and fighting (and winning!) against the proposal to criminalise clients here in Scotland! SWOU members protesting outside the Scottish Trade Union Congress against being excluded from the building in April 2013.

What are The Second Ever Sex Worker Film Festival’s highlights?

The selection of movies this year follows up the 2011 edition: among others, we are showing another of Dr Nick Mai’s movies, Normal, which we believe will really challenge viewers’ ideas of who / what is a ‘victim’. We are also really proud to show two movies produced or co-produced by SWOU collective themselves! These are Honeybringer, shot at Kolkata’s Sex Worker Freedom Festival in 2012, a really powerful documentary about the struggles of sex workers all over the world, and Whores Fight Back, about our comrades from STRASS, the Sex Workers’ Union in France, who are fighting against criminalisation of clients there too. The 2013 edition also includes three performances by SWOU members, so it is not just films but also live a

SWOU has so many events and projects, it is sometimes hard to keep up: from organising classes for sex workers to advocacy and lobbying for recognition of our labour and human rights; we will also soon start publishing academic papers in our own Evidence Collection to counter myths and stereotypes about sex workers. The Film Fest holds a special place in our hearts as it is a moment to celebrate the lives, struggles and victories of our movement all over the world with all our friends, families and allies. Things are moving fast for sex workers and it’s time for everyone who cares about safety, respect and rights for sex workers to get on board and support us. Coming to the Film Fest and educating yourself about our lives and work is a good step towards becoming a great ally!

The Festival’s programme showcases sex workers’ voices, struggles and experiences from Brazil to the UK, Thailand to France… And some extra surprises!

You can book your tickets on Rio cinema’s website.