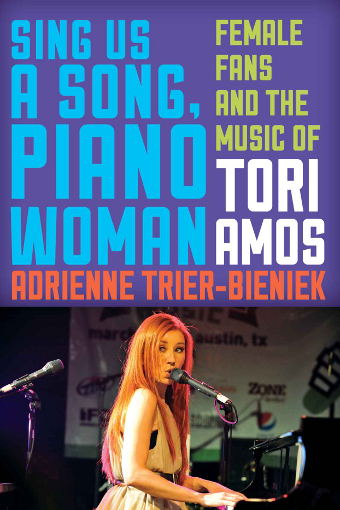 Tori and the women who love her: feminism in action?

So I’m a feminist. I’m a woman. I’m a fan of music – very often, of female musicians. I’m not, I have to declare up front, a dedicated Tori Amos fan. I think she’s a fascinating figure, some of her tunes are great and I’m glad she’s out there doing what she does – but I don’t own any of her albums. However, I jumped at the chance to read a book that might tell me something about this mysterious, talented lady and, more importantly, about ‘female fans’.

Because female fans have, as Trier-Bienieck establishes early on in Sing Us a Song, Piano Woman: Female Fans and the Music of Tori Amos, been largely ignored in studies of popular music and fandom. It’s always the punk boys, the skinhead boys, the mod boys and the metal boys. Women are generally consigned to the role of scantily clad, underage Stones groupie or pant-wetting Belieber and dismissed in terms of musical credibility. For example, I was disheartened recently to hear an interview with Blur in which they complained that, at the peak of their success, the entire front row was made up of 15 year old girls. As (probably) one of those 15 year old girls, I can tell them this didn’t make me an any less genuine and dedicated a fan.

So it’s refreshing to come across a study of a genuine, modern day feminist icon that examines her relationship with her female fans. Sing Us a Song branches out into a wider exploration of female fan culture, the relationship between feminist music and activism, along with the stereotyping of women both performing and consuming music, but Tori remains a guiding light throughout.

Trier-Bienieck begins by dissecting the restrictive stereotypes of gender in pop culture – from ‘cock rock’ to ‘teenybop’ – which perpetuate themselves by constantly reminding young men and women of how they’re expected to behave. She challenges the perception of many female pop stars as powerful, arguing that all too often they are silenced by the men who dominate the industry and who write, negotiate and profit on their behalf.

This seems particularly timely in the context of the furious discussions currently winging around the internet about Miley Cyrus who, whether you believe she’s being pimped by the men in suits or having the last laugh by enjoying her youth and beauty, seems to reinforce the tired stereotype of what a performing woman should be.

Trier-Bienieck contradicts herself somewhat when she slams the stereotype of female artists being expected to sing only about fluffy topics like boys and heartbreak with her claim (substantiated by her interviews with Tori devotees) that feminist fans want to hear their icons sing their own songs about “the experiences of women,” such as childbirth and issues with one’s body. She also points to feminist fans wanting to be stirred to feel “emotions” to the point of breaking down in tears at a gig. This seems as reductive and dangerous as the previous assumption; surely there’s room for women to do both?

Trier-Bienieck does, however, hit on something very real in her description of the empowerment women feel amid a female fan community, forging friendships and devoting themselves to art outside the male gaze. Feminist musicians and fans who don’t conform to tired norms are often branded as odd and “hysterical” or dismissed – like those 15-year-old Blur fans – as hormonal detritus, while male fanboys have always held an edgy and cool status in popular culture.

Trier-Bienieck takes us on an interesting history of feminist music through the waves, from Rockabilly to Riot Grrrl – unfortunately ending it there. She despairs for women in music beyond the third wave because she doesn’t hear women’s rights and issues being sung about. However, from Haim to Aluna Francis, Janelle Monae to Anna Calvi, I would argue that that there’s a very exciting generation of women doing their own thing right now who can’t be so easily categorised by “women’s issues” and this, in itself, is more powerful than another women-only scene.

There’s a whole world of light and shade between a Tori and a Britney and, thankfully, women’s musical choices are not limited to those two

I sometimes struggle with Trier-Bienieck’s dichotomous view of some issues. For instance, her research defines Britney Spears and the Spice Girls as anti-feminist and anti-Tori – “A carnival-like disruption in women’s advancement in music” – yet mentions young girls finding empowerment in Spears’ music. And I certainly think that for many young girls, Girl Power was the thin end of the wedge that led them to feminism. I would also argue that there’s a whole world of light and shade between a Tori and a Britney – thankfully, women’s musical choices are not limited to those two.

What I do identify with in this book are the quotations from women who discovered feminism through music, rather than the other way around. This shows how powerful a cultural force music can be and the genuine social ripples a political musician can cause.

In the chapter on musical healing, Trier-Bienieck describes how many of her interviewees expressed a desire to listen to music they could identify with emotionally; many of these women felt like Tori’s music was written directly for them, some going so far as note-swapping with Tori herself. This chapter leads into a serious and moving chapter about Tori’s activism.

As a rape survivor who also talks publicly about her miscarriage, Tori is a source of inspiration for many women who have been through these things. Whether through her combatitive lyrics, personal interactions with her fans or her work with RAINN (the anti-sexual assault organization she founded) Tori inspires women all over the world to heal themselves, support friends or help complete strangers. If you want any proof that musicians can use their fame to provoke social change, here it is.

Where were the women who love to see a woman in control onstage, making them dance or scream, regardless of whether they can directly relate the lyrics to their lives?

This book is an interesting journey around female fan subculture and a rare glimpse into the world of Tori Amos but, for me, it rarely comes close to reflecting my own experiences as a feminist music fan. I love it when an artist sings right in my ear, reflecting my experiences as a woman or otherwise. I also love a good sulk with my headphones on. But there’s no fun here.

I have difficulty with the picture Trier-Bienieck paints of women being so emotional and po-faced that they go to gigs for a big communal cry and a hit of “critical thinking” – while their boyfriends, presumably, hang out at the bar discussing sports.

When Trier-Bienieck was interviewing, where were all the women who just crave a good tune? Where were the women who love to see a woman in control onstage, making them dance or scream, regardless of whether they can directly relate the lyrics to their lives? And is Sing Us a Song looking at all this from the wrong angle: don’t all fans of alternative music – female or male – expect something a bit cleverer from their idols than fans of bubblegum pop do?

Sing Us a Song is a valuable contribution to pop music studies and will hopefully open the door for more examinations of female experiences. And if you’re a big Tori fan, it’s a must read. A major strength in the book is that all Trier-Bienieck’s statements are backed up by her research with Tori’s fan community. However, despite good intentions, I fear she is replacing one cliché with another and that she went into this study with a conclusion in mind. But women and pop music are complicated, ever-changing beasts and I didn’t expect this book to speak for all of it.

This is the cover for the book, Sing Us a Song, Piano Woman. The approximate top two thirds of the picture are indigo and contain the following title and author details: ‘SING US A SONG, PIANO WOMAN’ (whole of the left in light blue capital letters), FEMALE FANS AND THE MUSIC OF (top right, in olive capital letters) TORI AMOS (middle right, in white capital letters) and ADRIENNE TRIER-BIENIEK (final portion underneath, horizontal, in orange capital letters).

The approximate bottom third of the picture is taken up with photo of Tori looking over her right shoulder in a white dress, while singing into a microphone at a piano. There is another microphone behind her and a white backdrop event wall hanging in the background on the stage.

Louise is a copywriter based in London who learnt about feminism the best way: through music