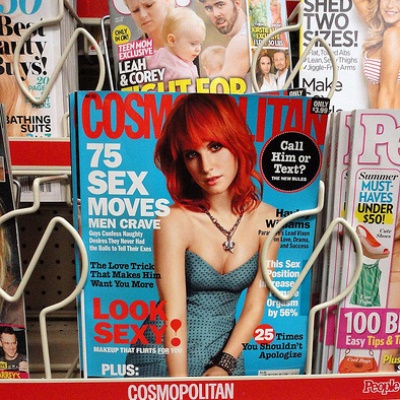 Lauren Hitchman explores how the sex tips she read in women’s magazines as a girl affected her sex life growing up.

When I was 13 my mother forbade me from reading teen magazines she deemed “too old” for me. I was told to stick to the safe magazines filled with fluffy animals and shiny boy bands. Of course, I rebelled.

I went further too: I began to sneak into my 18-year-old step sister’s room to read her infinite pile of “grown-up” magazines. Their covers proclaimed they knew all there was to know about sex, and I was curious. So far, my sexual education came mainly from Friends and a few biology lessons; I needed to know what I was up against.

I opened the magazines to discover a strange new world of the “right” underwear and bikini waxes. I’d heard of sex, but I had never heard of the maintenance that went into it. As I grew older, and closer to the time I thought I might have sex, it led to a few painful “close shaves” and the purchasing of lacy underwear that was swallowed by my size 18-20 sixteen-year-old behind.

My first “proper” boyfriend and I lived through a cacophony of awkwardness as we went through the motions of what we thought sex was like. Instead of learning the basics then advancing, we dived straight into sex 2.0, obsessed with “spicing it up” before we even knew what “it” was. Magazines taught me that my suitcase for a weekend away should involve chocolate body butter and handcuffs. I believed myself to be terribly inadequate when everything went wrong, which it often did.

That was silly and innocent compared to later years, when at times I felt coerced into behaving like an outlandish caricature of a woman in the bedroom. For years I lived in ignorance, assuming that everyone was being asked to catch sperm on their face, fuelled by men who had seen too much porn. But when I spoke to various friends it turned out many of them had fallen into the same trap, or had at least come to ridicule the sex tips they read in magazines. The simple fact of the matter is that sex you don’t feel comfortable with just isn’t fun.

One of my major epiphany moments was when a friend simply said “sex is hilarious”, and it is. The magazine representation of sex leaves no room for mistakes. Awkward moments are restricted to “confessions” pages to be ridiculed by the more sexually well-versed among us. It is easy to dismiss these issues, ignoring them and believing that girls should somehow inherently know how they should behave in the bedroom – but they don’t.

Now, finally, I think I might be almost normal. My relationship would probably be condemned by the magazines as being on a downward spiral into monotony, but we like it, we are comfortable. That is not to say I’m against experimenting, but anything I do in the bedroom is because I like it; it will be because I’ve discussed it with my partner, not because a magazine implies that’s what I should be doing.

If I ever have a daughter, I might not ban more adult magazines, but I will undoubtedly tell her that – until we ask them not to – every month these magazines will find something new to say about how women should perform sexually. We can rally all we like to try to stop the availability of porn to young people, but until we realise that there is damaging material on our shelves with no age limit it will be hard to tackle these issues. Personally, I want to see magazines printing articles that send girls into the realm of sexual activity instilled with the confidence to enjoy sex the way they want to.

The photo shows Cosmopolitan magazine in a magazine rack. The cover features a white woman with red hair and the headlines read “75 sex moves men crave”, “Look sexy”, “The love trick that makes him want you more” and “Call him or text him: the new rules”. Photo by benjamin sTone, shared under a Creative Commons licence.