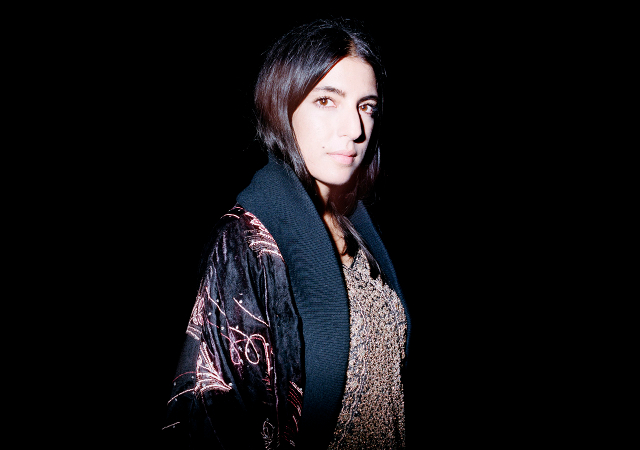 Mariam the Believer Q&A (part one)

My introduction to Swedish/Iranian musician Mariam Wallentin was through a mysterious ‘ID’ track in an Alex Metric set back in August. Who was this distinctive vocalist stopping me in my tracks with the line “I want to hear the echo of your voice in my head”? I was gripped and had never heard anything so chilling since discovering ‘Bela Lugosi’s Dead‘.

Google led me to the Prins Thomas mix of ‘Invisible Giving’ on Mariam the Believer’s Soundcloud page, where I also found Mariam’s original version: a divine, drum-focused track with a weird jangly doom-laden section in the middle that builds back up again to easily become one of my favourite tracks of the year so far.

I couldn’t wait to hear the track live. In fact, as someone who tends to prefer studio versions, this seemed like something I actually needed to hear live. I just couldn’t wait to be part of a shared experience of this (surely encore?) song, with everyone singing along.

I went to see Mariam play a short set in Bristol this Autumn and, as it turned out, ‘Invisible Giving’ was indeed the final -though not encore- track. However, while there was a definite vibe in the room, the lyrics not currently being out there meant the audience didn’t know the words to sing along. (Maybe next time!) Mariam played five other pieces, all from her Blood Donation album: the title track, ‘All There is’, ‘The String of Everything’, ‘Somewhere Else’ and ‘Dead Meat’ (recently described in Mojo as a pop-song mutation that “imagines Mary Wells via Portishead”).

Mariam’s solo project comes after her work with Wildbirds and Peacedrums and continues in a similarly strong percussive vein, starkly showcasing her fantastic vocal control and rhythmic command, while also bringing in its own atmosphere of “electro jazz witchcraft“.

I recently managed to catch up with Mariam via e-mail to chat about her recent single and her work in general:

I haven’t yet been able to track down the lyrics for ‘Invisible Giving’ Can you elaborate further on what you want to get across with this song?

I think that song is a very clear example of my themes for the whole album. I wanted to ask questions instead of delivering answers. I was tired of the ego and that we define ourselves as persons by what we think and say and own all the time, which makes us very unfree. So I wanted, somehow, to just open myself up a little bit more this time and dare to show that I don’t know much at all but, instead, that I am curious and have a hunger to search.

About holes… Like black holes in outer space and the holes we have in our bodies if they are empty or maybe full with something that we don’t see or feel. Also, about giving… The title of the album (Blood Donation) is referring to giving something from inside of your body (just like singing) and the song title, ‘Invisible Giving’, is about the giving that goes on around us but doesn’t need anything in return: the giving we cannot see. Also, the thing I often come back to when writing lyrics is taking the weak and dark parts in me and trying to turn them into something strong and powerful; such as what I sing in the refrain in the song: “We could dare it. Life.”

The Prins Thomas remix of ‘Invisible Giving’ was my introduction to the song and I really like the way a more electronic sound serves your vocals. It strikes me that your voice is your most powerful instrument but that your musical skills are constantly evolving. The story goes that Blood Donation was born after you learnt electric guitar and purchased a white Gibson in New York. Have you ever considered delving into directly producing electronic music?

Not really. I have had a couple of solo projects, earlier, working with only my voice and electronics, quite experimental stuff. But, personally, I do love the physical feeling that an actual instrument gives me. The feeling on the fingertips when touching a string or the resonance in the body when hitting a drum… I guess I’m quite poetic that way 😉

I love to try out new instruments. For the latest Wildbirds & Peacedrums album, it was the steel-pan and before that the zither and the pump-organ. Right now, it’s the guitar. Then I often never really have the patience to really learn an instrument well, but I have found peace with that. Now I learn what I need; the feeling for me is always that my voice is driving the train and the rest is in the wagons. In the end it all comes down to the bodily experience and to actually feel the music that way.

Part two of my Q&A with Mariam, discussing her influences and politics, will follow tomorrow!

The digital version of Blood Donation is out now, with the CD/LP release to follow on 11 November.

Mariam the Believer bathed in light and looking straight at the camera (right side on) against a stark black background. Her long black hair is tucked into her flowing jacket/cape/gown. Press shot by Klara Källström and Thobias Fäldt.

Mariam the Believer digging a hole in the dark. Her movements are layered over each other in separate shots to achieve a multiple moving image effect.