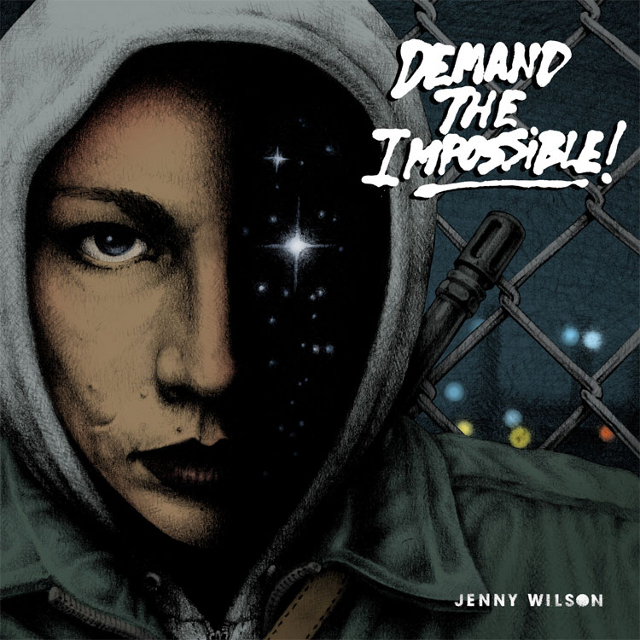 Swedish singer-songwriter Jenny Wilson has spoken of a longing to make music that “talks straight to the stomach”. Marta Owczarek listens to her latest album and finds a sound that is decidedly more aggressive than her previous work.

“‘Be realistic, demand the impossible!’ was a graffiti painted by the 1968’s student radicals over a Paris wall during the uprisings,” says Jenny Wilson about the inspiration for her latest album Demand The Impossible!, released by Sony Sweden/Gold Medal Recordings. The phrase is also attributed to Che Guevara but Wilson is either not aware of this or chosen not to comment on the connection. She has used exclamation marks in album titles before (2009’s Hardships!) but this one seems more deliberately aggressive and confrontational than the title alone. Already, the cover is a departure from Wilson’s signature style of photographs of herself: tasteful but heavily stylised, where she appears in sharp make up, strong outfits, and adorned with jewellery. Even the hunting gun she holds on the cover of Hardships! is an antique, and so arguably more of a prop than an actual threat.

On Demand The Impossible!, Wilson is drawn by urban artist Finsta and appears in grey hoodie, with a zip-up jacket and carries what looks like a machine gun over her shoulder. Half her face is obscured and surreally replaced by stars, vivid and white, contrasting with the messy colours of city lights visible in the background behind a chicken wire fence. It is almost militaristic. Wilson has portrayed herself as a fighter before, but this is an entirely new incarnation: as stated in the press release for DTI! (accessible on Wilson’s Facebook page), she’s a warrior and a street prophet “melting down the universe with an urgency that you never see a politician do”…

Cover for Demand the Impossible! shows a drawing of Wilson by Finsta. She appears in a grey hoodie, with a zip-up jacket and carries what looks like a machine gun over her shoulder. Half her face is obscured and replaced by bright stars, contrasting with the messy colours of city lights visible in the background behind a chicken wire fence.