Reasons to date a girl with an eating disorder? There’s something fundamental that you’re not getting

Content note: this post contains details about eating disorders. The post it is responding to, which is linked to in the first paragraph, could also be very triggering. 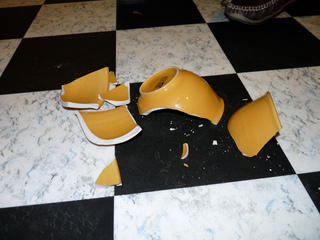 Thanks for your considerate and eloquent article on “5 reasons to date a girl with an eating disorder”. It made me hark back to the golden years between 15 and 17 when I was anorexic. At the time I didn’t have a boyfriend so maybe it would have been nice to have someone like you on the scene. However, I think it would only be fair to offer you a few words of warning (please note – this is purely from my own experiences, but I’m sure you can generalise out to any other anorexic or bulimic chicks that you’ve met or come across, because after all, we’re all the same right?).

1. “Her obsession over her body will improve her overall looks”

Well, I was thin and getting thinner, if that counts. However, please bear in mind that the thinness will need to override lank hair, greasy skin and yellowing teeth. As for being “deft at properly dressing [my] body type”, sadly I spent the majority of these years in an oversized pair of jeans and the biggest, baggiest jumper that I could find. On a related note – I hear that men sometimes like women who have breasts? As an anorexic, I had none. They are usually the first thing you lose when you lose weight.

Now, here, you’re bang on. I certainly did cost less money. But “go out to nice restaurants”? “Order take-out”? Don’t be silly – I didn’t do either of these things for the best part of 5 years. So it’s even cheaper than you think – when you want to go out to dinner to celebrate a birthday or anniversary, don’t worry, I wouldn’t have been able to go at all.

Obviously, physically, yes. But mentally? Anorexia mostly takes place in secret, in defiance of family, of friends, of anyone who cares about you. There are all sorts of games you can play including how to throw food surreptitiously into a bin and how to pretend to every person that you see in a day that you’ve already eaten. It also takes a huge amount of willpower to watch your parents break down in tears in front of you and go on starving yourself anyway. But I did. And anorexics do. So, “eager to please”? I think not.

4. “Probably has money of her own”

Well, I was 16. I had some pocket money, but we’re talking enough to buy The Lord of the Rings in paperback, not a sports car. In a great book by Janet Treasure aimed at helping families and sufferers survive eating disorders, I remember reading that they are not purely a white western modern phenomenon; there are instances of eating disorders in times and places where the prevailing idea of what’s beautiful is not the androgynous supermodel of today’s Western elite. Although frequency does differ between countries, cultures and socio-economic groups, ultimately, they pop up everywhere. But I’m sure you’ve read tonnes of research on this that’s far more up to date and accurate.

Mortified as I am to disappoint, whilst anorexic the last thing I wanted was a guy to start taking my clothes off; I did, after all, hate the sight of my own body. Bear in mind that anorexia literally sends the body backwards through puberty – breasts disappear, periods stop, and hormones that start rushing around during adolescence begin to dry up. So believe me, sex was the LAST thing on my mind. On a related note, there’s a decent probability that if I want kids I might not be able to conceive them. Not having periods for three and a half years really screws up your reproductive system.

You say you’ve dated girls with eating disorders before and yet there’s something fundamental that you’re not getting: it’s not about being thin, it’s about being sick. If you have an eating disorder you have a mental illness. What you seem to be saying is that you like dating women who are ill, not well. Perhaps you should write an article about 5 reasons to date a girl with leukaemia? Or breast cancer? You also seem to be suggesting that the things you value in these woman are precisely the things that either make them sick or are symptoms of their sickness – and therefore, as a boyfriend, the best thing to do is help to keep them sick, rather than help them get well.

I hope these warnings haven’t put you off finding that anorexic gem in the bargain bin of the Western dating market; in fact it sounds like, once, I could have been exactly your type. It’s such a shame that I’m now with someone who isn’t an ignorant misogynist and who thinks that the term “retail price” applies to stuff you buy in the shops rather than women. I don’t know what I see in him.

[The image is a photograph of a smashed yellow bowl on a tiled floor. It was taken by Ruthanne Reid and is used under a Creative Commons Licence]