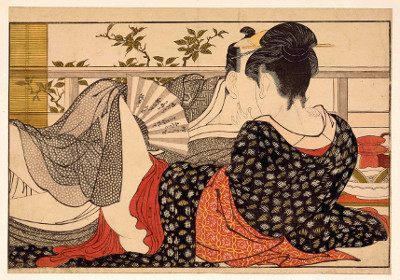 The joys of sex

Until 5 January, 2014, visitors to the British Museum will be able to view the first dedicated shunga exhibition in the Western world. Like a lot of Japanese art, shunga (literally ‘spring pictures’ in Japanese) is beautiful. It is characterised by strong flowing lines, rich details made with a delicate touch and sometimes rendered using the finest materials such as silk and gold leaf.

It also features explicit scenes of a huge variety of couples having sex. I really mean variety: heterosexual, homosexual, threesomes, even bestiality. Of course, modern pornography does not lack for variety. But what it does lack is a sense of fun and joy.

A wall panel just inside the exhibition claims that “The essence of shunga was to invent a seemingly unproblematic fantasy world of sexual wish fulfilment.” There is an initial shock when seeing the images which feature hugely engorged and outsized genitals (sometimes played to comic effect, such as a scene where all the men in court proudly submit their members for measurement). However, once you’ve got over that, what is striking about them is the sense of joy the depicted characters take in sex.

Shunga delights in sex, in portraying a variety of couples performing a wide swathe of acts and celebrating the pleasure of everyone involved. It also has, I was delighted to find, a sense of humour. One of my favourite images shows a man having sex with a woman. The focus of the image, however, is on a cat, apparently about to pounce on his dangling testicles. Even my mother, who definitely does not approve of pornography, let out a sharp gasp of laughter when I showed her that image.

Shunga caters for almost every gaze one can imagine

The curator, Timothy Clark, calls shunga “a love letter to sex”, and it’s as good a description as any. What it most reminds me of are saucy seaside postcards, the kind that use Carry On style jokes and double entendres to imply sexual relations and desires. But whereas saucy seaside postcards rarely acknowledge anything but the male gaze, shunga caters for almost every gaze one can imagine.

One of the most celebrated series of prints is Kitagawa Utamaro’s ‘Poem of the Pillow’ (1788), which depicts as many different couplings as the artist could imagine. Not all of these are happy; one woman watches as her friend is violated by kappas (a Japanese water monster) and in another a woman fights off a man attempting to rape her.

Scenes of rape are apparently rare in shunga and rapists are always depicted as repellent. Its presence seems out of place with the claim that shunga represents sexual wish fulfilment. Is it supposed to be a titillating rape fantasy? Does it disapprove of the act? Or is the intention really just to portray sex in all its forms, good and bad?

Stranger sexual encounters include the famous scene of a female diver being pleasured by an octopus. The title in English, which hardly prepares you for the image, is ‘Pine Seedlings on the First Rat Day or Old True Sophisticates of the Club of Delightful Skills’.

Compared to the pornography found online, these images may not be quite so shocking. It does however suggest that such perverse desires are not simply a product of the internet but rather an indication of the depths and extremes that human sexuality can invoke. But with such a wide variety of images being created, the question that begs to be asked is who was all this made for?

Women are not passive in shunga – they are sexual beings with their own desires and wishes that demand to be fulfilled. Parodies of instructional texts that stressed Confucian obedience and self-control encouraged women to seek sex for their own pleasure, suggesting that their husbands will also want them to seek pleasure. 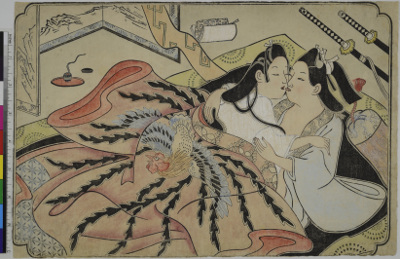 Wish fulfilment in modern pornography seems somehow to be less rich and less human too. Nobody seems to really be enjoying themselves – there is no laughter, no smiles or gentle encouragement.

For all its perversions and deviations, shunga seems to me to represent a far healthier expression of sexuality than that found in much of pornography today. The image of sex in shunga, despite being set deliberately in a fantasy world, seems closer to sex in reality than sexual depictions in modern pornography. It’s funny, grotesque, beautiful, scary and a thousand other things.

Modern pornography may have taken the tentacles from shunga, but I wish that it had also taken all those other elements. Maybe then we would have something a little more inclusive, a little less exploitative – even a little more artistic.

Shunga: sex and pleasure in Japanese art will be showing at The British Museum until 5 January.

Image 1: Kitagawa Utamaro (d. 1806), Lovers in the upstairs room of a teahouse, from Utamakura

(Poem of the Pillow), c. 1788. Sheet from a colour-woodblock printed album. © The Trustees

of the British Museum

Image 2 and Image 3: © The Trustees of the British Museum