International Day to End Violence Against Sex Workers – which is marked every year around the world on December 17th – started in 2003, as an act of community-led resistance to the disposability of sex working lives.

That “community-led” bit is important. Some aspects of violence against sex workers are made hyper-visible, or, to paraphrase many feminists I’ve seen, “violence against sex workers? Isn’t that mainly, like, pimps and johns?” People are gagging to hear that stuff – or, of course, to tell you that all sex work is violence. (Take a moment to contemplate how totally fucking weird it is that, before we even start on policy, sex workers have to fight to be allowed to have differing subjective experiences. And trust me, we have to fight.)

What I mean to say is, people who are not sex workers are often very keen to talk about violence against sex workers – so long as the definitions and the direction of the conversation are kept firmly out of the hands of sex workers ourselves.

We’re allowed to talk about interpersonal violence – so long as it’s from clients or managers – but we’re punished if we want to talk about the structural violence that both facilitates, replicates, and amplifies that interpersonal violence. Is that too abstract? I’m saying that if you’re saying “male violence”, and letting us put rape in that category, but not put arrest, you’re part of the problem. And no, stop – I can already feel the weight of hundreds of carceral feminists, about to type into the comment box underneath this piece, “but Molly, this is so simplistic, you’ve obviously not understood that we’re trying to criminalise the johns and decriminalise the…” – just stop. On International Day to End Violence Against Sex Workers, take a seat and listen. I’ll get back to this.

Since I’m writing in a feminist space, I might ask you to recognise that disbelief around rape, and making people afraid to speak about the violence they have experienced, for fear of its immediate co-option and use against them, constitutes a form of violence. What I want to highlight is that that violence isn’t just at random; like misogyny in the wider world, it demarcates spaces where certain people are more comfortable participating than others. When the cost of admittance, as a sex worker into feminist conversation about sex work, is “if you are who you say you are, have you ever been raped?” that cost is both deliberate, and way, way too high. (And no, these aren’t isolated examples; these are just the ones that spring to mind. For a pretty rigorous examination of misogyny in anti-sex work texts, Call Things By Their Proper Names is a good start, along with hanging out with sex workers.)

Let’s return, with crushing inevitability, to the question of arrests. “We want to decriminalise the women, by criminalising men’s demand…”, the litany. Here’s some cool fun stuff: obviously the “Swedish model” has never actually decriminalised the women, by which I mean repealed the laws that criminalise sex workers, and its advocates never seriously advocate for this. Indeed, they often campaign for laws that add further direct criminalisation onto sex workers, as in Ireland, where Turn Off The Red Light has succeeded in getting the Justice Committee to suggest that accessing online sex work advertising platforms should be seen as legally akin to accessing images of child abuse, immediately putting every sex worker who logs in to check on a work account into the same category as a paedophile; or in Norway, with Operation Homeless; or in Illinois, where the End Demand Coalition successfully increased the penalties for the purchasers – er, and sellers! – of sex, and “a 2012 examination of prostitution-related felonies in Chicago revealed that of 1,266 convictions during the past four years, 97% of the charges were made against sex workers“.

Meanwhile, raids on saunas in Edinburgh – described by women who experienced them as, “so violating, so humiliating” – are referred to by the Edinburgh Violence Against Women Partnership, in their submission to the city council consultation on sauna licensing, with merely the line: “we support this police action”. I feel like I should add for clarity that the Edinburgh Violence Against Women Partnership are nominally against violence against women. And wait ’til you meet Glasgow ‘support’ services:

“We don’t wait until [prostitutes] say they want to exit and we share all our info with police,” says [the manager]. “We try everything to engage with them. That could be a [criminal] charge, which puts them in a system where they have support.”

Think about prisons as sites of gender-based violence, about what a criminal charge does to women’s access to their kids, to secure housing – about what a prostitution-related conviction will do for their subsequent employment prospects. Think about the classist, misogynist and coercive ways that some women position themselves as “helpers”, contrary to the consent of those they’re “helping”.

If you want any organisations that give a single fuck about the laws that prevent sex workers from working together for safety – such as the three women in Bradford earlier this month, who left an exploitative employer, set up a working flat as an informal co-operative, and were all convicted of brothel-keeping charges – or the abusive conduct of police raids on our workplaces, you’ll have to be looking at sex worker-led organisations. Because all those organisations and people that are tripping over themselves to talk about violence if it’s from “pimps and johns” mysteriously drift away when it’s the laws they support – and the tools of the state that they support to enforce those laws – who are in the frame.

Anyway though, none of this really matters, right, because prostitution is VAW, and if you criminalise the “johns and pimps” (those women in Bradford), then you’re, like, sending a message! About gender equality! Right? Well, first, I think you need to find a new message delivery system, sisters, because your ‘intended’ missive is not getting through: there is no evidence to show a reduction in either sex workers or clients in Sweden. Meanwhile, instead of entering a golden age of pity for the poor prostitute (thanks), the Norwegian public has hardened its punitive stance on sex workers since the passage of the law criminalising clients, rather suggesting an increase in stigma against us – not exactly surprising given the Swedish report into the law’s effects lists “more stigma” under the “good things” section. That wasn’t the “gender equality” you had in mind – erm, was it…? I just can’t tell anymore.

Moving on though, imagine for a second that your message had even arrived. When the tolerance zone was scrapped in Edinburgh in 2007, reported incidents of violence against street-based sex workers went up by 95% within a year. Now. I’m difficult to shock, but this next sentence shook me hard when I read it: since the introduction of anti-sex work laws such as brothel-keeping, and living on the avails, in Canada – a legal framework very similar to the one used against sex workers here, and fought only by sex worker-led groups and our allies, remember – and which is also the legal framework that persists under the Swedish model, because none of these laws criminalising sex workers are repealed – since the introduction of those laws in 1985, the mortality rate amongst sex workers in Canada has gone up by 500%.

Is “sending a message” worth the price? Could you not just take out an ad in the papers? I read that figure – 500% – and I walked around all day like I’d been punched. Sex workers and sex worker-led groups have taken the Canadian government all the way to the Canada Supreme Court to Challenge these laws. Guess who’s on the opposing side. No, guess. 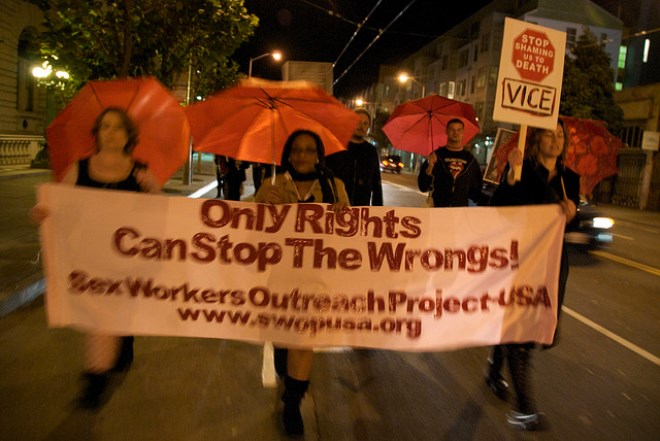 Basically what I’m saying is, if arrest – and other forms of state and structural violence – isn’t part of your intentions, why is it such an integral part of what actually happens? I think for some supporters of the Swedish model, they don’t care enough to have looked into it, and for others – they do know, but they just don’t care at all. “We support these police actions”. (Sex workers aren’t allowed onto the Edinburgh Violence Against Women Partnership, because sex work is violence against women, or something.) I have never encountered those who advocate for the Swedish model engaging seriously with the issue of what their policy actually does to sex workers – to the extent that, when asked, face-to-face by a sex worker, what she could do after her clients were criminalised, given that she has no options, they literally interrupted her to insist to her that she was wrong. Is that engaging in a serious way with the material reality of our lives?

I almost want to apologise for writing about the Swedish model, again. I’m tired of this too. I’m fucking exhausted. But there isn’t a way to write about violence against sex workers – about what December 17th means – without writing about structural violence, because violence against sex workers is a super fucking contested topic, and one where we always have to guard against co-option or pity.

So, on that note, because the idea that sex workers can self-organise and speak for ourselves is still radical, and often erased, here’s some of the amazing stuff that sex workers have done and are doing, around the world, the mark this day. Last year, sex workers in Kenya held a huge street protest, and Maggie’s Toronto and Native Youth Sexual Health held a discussion, ‘State of Disrepair: State Violence and Sex Work‘. Melissa Gira Grant wrote about her memories of the first year this day was marked. This year, there are events in Sarajevo, Prague, Bulgaria, London, Paris, Glasgow, Budapest, Kyrzgstan, Macedonia, the Netherlands, Romania, Moscow, Slovakia, and Ankara. That’s just in Europe and Central Asia. Against the odds, sex workers are organising everywhere, to assert that we can speak for ourselves, from all of our diverse experiences and perspectives.

The second is by The Advocacy Project and shows a sex workers’ rights protest in India.

The fourth is by Steve Rhodes and shows people marching along a street holding a banner that reads “Only Rights Can Stop the Wrongs!, red umbrellas and a placard that reads “Stop shaming us to death VICE”.