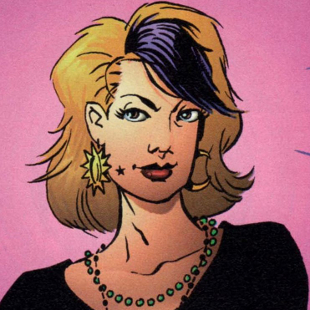 A guest post from Saranga, who had high hopes for Mage: The Hero Defined but has been disappointed to find that the women read like props who exist to bolster the men’s actions.

The Mage series is about a fella named Kevin Matchstick who meets a wizard named Mirth who grants him supernatural abilities and a magic baseball bat. It turns out that Mirth is Merlin, the baseball bat is Excalibur and Matchstick is King Arthur. It’s set in the modern day and it’s rather symbolic. Matchstick goes on the hero’s journey and fights lots of mythological creatures.

I had high hopes for this. I’ve enjoyed other series by Matt Wagner and they’ve always been good. However…

I’ve found this series utterly uninspired and dull. The plot feels obvious and by-the-numbers. It’s a hero’s journey, a common plot, but I just feel I’ve seen it all before and not in a good way. You have the sidekick, the other warrior, the team-up, the teacher, the victory, the betrayal, the lesson – but there doesn’t seem to be anything more to the characters. They are just playing roles. There is nothing in there to make me think the story is different or special. The few hints at wider otherworldly menaces, little touches of background and attempts at world building are just that: attempts. I feel like the characters are moving and acting in a vacuum. Works like this should full of symbolism and meaning; they should create a world with depth and reference and there should be something there beyond the obvious. If you use tropes, you need to be clever with them.

Having said all that, my main irritation with the series is in the women. The group of three main (male) heroes go to meet some friends, a couple. The fella gets called out to fight some nasties (demons), the woman (Isis) stays inside and flaps. She panics. But, she’s a witch! Why doesn’t she get involved in the fight and try to save her lover? Having her flap and panic just seems to reinforce how traditional and unimaginative this story is. The men fight (and the reader should apparently identify with the men, because OF COURSE the reader is a man) and the women weep. Actually, there’s no need to assume the reader is a man. I don’t know if that is what the writer/artist was thinking. The point is that when readers of either gender are supposed to identify with the male hero (and his male mates), the women tend to get sidelined. This wouldn’t be so much of a problem if we had more women in the story.

Back to Isis. We see elsewhere in the series that she has pre-worked spells ready for use. But in this circumstance she appears to have nothing. I tell you, Zatanna wouldn’t be caught out like this!

I know this is a retelling of the Arthur story but that’s no reason to make this woman so useless. Maybe her behaviour is explained away in the previous series. I don’t know. I now have no desire to read any other series. In this one, her behaviour and the set up is very irritating.

The other chick of note in this book is Isis’ sister, Magda. Magda and the hero are prophesised to get together for sexy times. When they finally meet, she is slim and smoking hot. Of course she is. Because the prophecy wouldn’t be fair if she was ugly or plain? If it’s the feelings between them that matters, she doesn’t need to be smoking hot. Isis isn’t, but then we are not supposed to ID with Isis’ lover. I mean, heaven forfend we ID with a character with an ugly girlfriend. The women read like props, existing only to bolster the men’s actions. Maybe the other sidekick/friends characters are equally useless. Maybe I just can’t see it because I’ve got my gender hat on. You guys tell me.

But that’s what I mean by traditional. This series is a bog standard, uninspired, unimaginative, boring, hero-warrior story. It’s not creating believable multifaceted characters; it’s creating ciphers that move the plot along step by step. There is nothing new or intriguing about this and I can’t abide creative works that aren’t actually creative. This is a shame because Matt Wagner has done some other pretty great stuff (Grendel and Trinity for example). Grendel does give us some innovative storytelling and interesting gender roles. Trinity gives us a wonderfrul (ha!) Wonder Woman, exalted to the same level as Superman and Batman. Unfortunately, Mage: The Hero Defined sucks both on a political level and a storytelling level.

Mage: The Hero Defined is available to buy and you can find a full results list for a search of the series through this Amazon search.

Saranga is a 33 year old bisexual feminist reading many many comics. She runs New readers…start here!, where she reviews comics for people who are new to them and also Pai, where she talks mostly about comics. Her favourite hero is Supergirl. She is on twitter as @sarangacomics.

Head and shoulder edit of Magda in a black top, green beads and sun and moon earrings. She has blonde hair with a black fringe and stands against a pink background. Art by Matt Wagner, colours by Jeromy Cox. Publisher: Image Comics.