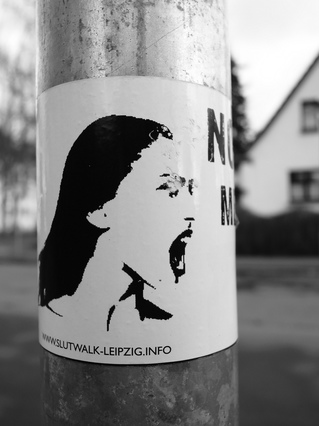 No, no, no: pick-up artists and rape manuals

Pick-up artistry (PUA) is a highly questionable method for men to pick up women. It uses techniques such as ‘negging‘ (“lowering her self-esteem through a mild insult, [so] she will be more easily seduced”) and takes inspiration from prison rape and dog training to manipulate, trick or coerce a woman into bed.

In fact, I have seen very little from the PUA community that isn’t somewhere on the continuum from disturbing to downright terrifying, and a self-published book I was alerted to this afternoon has done nothing to allay my concerns.

Are you sick of getting a hot girl back to your place, excited at the prospect of fucking her, only to come up against last minute resistance when you go to make your moves…?

But believe it or not, this situation happens to countless guys just like you all the time. Guys who are actually pretty good with women but still haven’t mastered the art of “closing”…

But these days I rarely run into this dreaded Last Minute Resistance, or “LMR” for short. And in the rare cases that I do encounter it, I cut through it like a hot knife cuts through creamy, yellow butter.

In this guy’s eyes, having sex with a woman isn’t about connection, communication, or even desire. It’s about “closing” the deal, getting what he wants, regardless of objections, resistance or rejection.

The author of this book also wrote a blog post: “When Her No Means Yes”.

Yet somehow, when it’s all said and done, the woman is invariably happy that I didn’t listen to a single word of protest she uttered; that I barreled through her resistance nonchalantly and drove the ball to the basket. Women RESPECT this sexual insistence even if they aren’t acutely aware of it.

It is hard to describe how frightening it is to read such deeply entrenched rape myths coming from a man who not only believes them himself, but is also promoting them to other desperate men, ‘barrelling through’ their own resistance to the idea of not ‘listen[ing] to a single word of protest she utters’.

One issue that comes up regularly within PUA discussions is that women hold too much power because we can reject men, and by doing so we are being controlling. The PUA response is to just damn well take the power back. He goes on,

Ask any guy who’s banged a lot of girls and has had a lot of same-night lays, and he will surely regale you with tales of seemingly insurmountable resistance, conquered and slain by his resolve and unwavering horniness. It’s in the nature of beautiful women to resist, test, protest, sabotage and make your job of fucking them difficult.

In the modern context, rape is essentially the act of ultimate validation and a rape accusation is the ultimate act of attention whoring. I’m not supporting it of course, don’t be silly. But think about it. If a man finds a woman SO incredibly desirable that he would throw his freedom, reputation, his whole life away to fuck her, that shows the woman is on the highest echelon of desirability.

Rape is not about desire. When it happened to me I wasn’t flattered that the perpetrator found me so desirable he would throw his freedom away to fuck me, nor was it ‘the ultimate validation’. I can’t believe I’m even having to clarify that.

The very assumption that we say no not because we don’t want to have sex, but so that we can humiliate and laud control over the man who approaches us is incredibly arrogant on the part of the man being turned down. We couldn’t possibly have legitimate reasons for saying no. We couldn’t possibly just not desire him. Or be a lesbian. Or be in a monogamous relationship. Or not feel in the mood. No, our objections are a challenge to his masculinity that should be overcome.

I can’t overstate how dangerous this man’s message is. He goes on,

But I have to issue a serious warning: plowing through a woman’s objections with bemused persistence isn’t for newcomers to the game. […] You need to be FLUENT in reading female body language. You need to know exactly what you’re doing. The thing to understand is that telling a man “no” is a way to weed out the weaklings from the men who know what they want (her).

Again, we are dehumanised, and our wants and desires and reasoning are totally dismissed: it’s all about wearing us down so that he can get his wish.

By reducing our bodily agency and consent to an abbreviation, a man can start to feel he is legitimately ‘overcoming LMR’, not raping a woman. It sounds so much nicer: our objections are a game, and we’ll thank him if he forces through them regardless.

A note to Mr Vinturi: no actually does mean no. It signifies the end of the discussion, not an invitation to push harder.

So, where to start by tackling this dangerous shit? I don’t want to give him any link juice to boost his search engine rankings, but I understand that many people want to complain to Amazon about their marketplace being used to promote rape manuals. So I’m using a non-clickable link that, if you want to go there, you can copy and paste. If you are outside the UK, replace the ‘.co.uk’ in the URL with the top-level domain where you live.

*Edited to add: as of 3.30pm it looks like Amazon has taken the book’s page down

You can complain to Amazon by scrolling to the bottom of that page and selecting ‘Would you like to report this content as inappropriate? Click here’ under ‘Feedback’.

[The image is a photograph of a sticker attached to a post. It shows a woman shouting, and has a link to Slutwalk Leipzig. It was taken by Hybrid Moment and is used under a Creative Commons Licence]