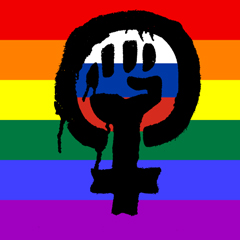 ‘They’re not gonna get us’ – The return of Tatu

This is a guest post by Laura Kay, who is a writer currently living in Sheffield who migrated there from Hertfordshire for Uni and never quite made it back. In her spare time she devises elaborate plans for international success and then drinks gin and watches Parks and Recreation instead.

“Soon there will be laughter and voices, beyond the clouds over the mountains, we’ll run away on roads that are empty… nothing can stop us, not now I love you, they’re not gonna get us.”

Given that these are lyrics from a same sex Russian pop duo you could be forgiven for thinking that they’re referring to being in love with one another and that when they escape over the mountains of Russia, they’ll find themselves free and happy safe in the knowledge that no one’s going to ‘get them’. Perhaps it’s a reference to Russia’s increasingly severe laws which persecute LGBT people and are driving people to live in secrecy, fear and under suspicion.

But of course, anyone who has not been living under a big heterosexual rock for the past 10 years or has frequented any gay establishment whatsoever and requested the ‘megamix’, will know that the phrase ‘same sex Russian pop duo’ can only mean one thing: Tatu. And of course we all know that they’re not about to run away over the rainbow with each other any time soon despite all that previous kissing in the rain. That’s right, the faux Sapphic schoolgirls who sang the now anthemic (for lesbians at least) All the things she said all those years ago are all grown up and have made a strange yet timely appearance at this year’s Winter Olympics in Sochi. Unfortunately only local TV channels were privy to their performance as they were on during the pre-show but any internet-savvy interested party can quite easily find the video online and it’s something of a spectacle.

Perhaps as a nod to their famous school uniformed past, Lena Kativa and Yulia Volkova can be seen in shirts, ties and long tartan skirts. One of them is even wearing a trilby to compliment her tie, a classic and timeless lesbian combination which normally I’d be happy to see getting some airtime but in this case I am affronted by because these are not real lesbians wearing their outfit with pride, love or even a hint of irony. Real lesbians are busy being persecuted, beaten, tortured and chased out of their own homes by vigilante groups with the full support of the police and Putin’s cronies i.e. the Russian government. The spotlight on the games this year by the media has been frequently focused on Russia’s human rights atrocities towards LGBT persons and has highlighted the extent to which gay people are forced to live in fear for their lives because of who they love; this is sadly not hyperbole or exaggeration as many people who were ‘out’ are going back ‘in’ as a matter of urgency.

The sudden wheeling out of pop group Tatu is undoubtedly a bizarre move given the current climate of severe and violent homophobia in Russia. Why make a nod to accepted, even celebrated lesbianism now? With the whole world watching one might feel that it’s safe to assume that this move is designed to placate countries that are outraged at their human rights breaches, however if this is the case and quite frankly it’s anyone’s guess if it is, it is pathetic, even laughable. Despite Putin’s protests, Russia is no friend of the LGBT community (Elton John included) and as if to demonstrate that perfectly, Tatu, his apparent concession to pressure from the West are in fact straight women who once posed as lesbians to sell a pop song. Straight women posing as lesbians are notoriously and outrageously the most accepted and easy to stomach version of homosexuality going. Yes they can touch each other, stare into each other’s eyes longingly and even kiss without causing too much offence because, quite frankly men enjoy it. Because men enjoy it and really how troubling can female sexuality be? Many are of the belief that it’s non-aggressive, passive and without a man, pointless. Tatu are Russia’s answer to showing their respect and acceptance of homosexuality because they are approved of by the men at the top and really, theirs is the only opinion that counts.

Because it was not staged internationally there hasn’t been too much fuss made about the Tatu performance but I am certain that it’s something that’s not going to pass lesbians by, because faux lesbianism is used constantly and vociferously by all the wrong people and Putin is just about the worst of all. He is not out to make money from the display of these women, he is out to make international heads turn the other way when it comes to Russia’s LGBT laws.

Image attributions: The image at the head of this post is called rainbow fist russia and was created by Helen from the following sources:

If reusing this image elsewhere, please ensure correct attribution and a link back to this page: /blog/2014/02/20140213_Tatu_Sochi#attribution