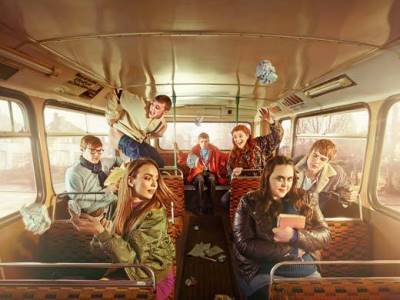 Fat in film is a feminist issue

This is a guest post by Lily Kendall, a feminist human rights activist living in London. Lily is a founding writer for feminist blog The Hussington Post and spends her free time watching cats on YouTube.

My Mad Fat Diary has made a welcome return to our TV screens this week. Protagonist Rae Earl gives us a refreshing (and all-too-rare) female take on burgeoning teen sexuality, body image and mental health. It’s encouraging to hear a young female character speak frankly and humorously about sexual desire (top quote: “I want him to go down on me for so long he has to evolve gills”). It made me consider how rare it is to see a portrayal of a larger woman on screen speaking in a genuine and human way about her sexuality.

The show is, in my opinion, a positive move in the right direction. My only quibble is this: why must larger women constantly be defined by their size? It’s great that we are addressing the existence of damaging body issues created by the pressures of our society (something sadly not diminished since the early 1990s when show is set). But isn’t it damaging that almost every time we encounter a larger woman on screen, she’s obsessing about her weight?

Larger characters always seem to operate within the paradigm of a universally skinny peer group, which over-emphasises their comparative “fatness”. The world doesn’t operate on some bizarre binary system in which the occasional “fat” person crops up in a landscape of “skinny” people, so why does the world as represented in film and TV reflect this warped perspective?

I started thinking about the larger women we see on screen. They almost never make up bit parts. How often do we see plus-size extras? Almost everyone in film is slim by default. This thought occurred to me whilst watching the Oscar-nominated Nebraska. Plus-size character Nöel, played by Missy Doty, has only one scene and her size isn’t mentioned. It suddenly struck me how unusual this is – we’re so used to seeing larger women on screen only in the event that the plot requires them to be large.

From the get-go roles for women and men are cast differently, with women’s roles overwhelmingly reliant on appearance. Miss L’s brilliant Tumblr has been highlighting the inherent sexism of casting calls since early last year. Laura Bates of Everyday Sexism started the movement in response to sexism in the film industry. In the descriptions of character traits men are defined by what they do, by their driving ambitions, by the inner workings of their soul. A typical casting call for a female role might read “slim, nice hair, attractive”. A woman has to conform to some pretty narrow criteria just to qualify for most roles. It seems that a larger woman won’t even be considered for a role that doesn’t specifically involve a size-based plot-line.

Why should fat be a defining characteristic? Slim characters have all sorts of story-lines, their remit within a film reaching beyond their weight. ‘Fat’ people are fat. They might be struggling against it (Hairspray), be comical because of it (Bridesmaids) or even grotesque and ‘un-female’ as a result of it (Big Momma’s House). A particularly damaging stereotype is that of the large woman with the comically high libido. This points to a broader sexual standard within our society which takes a woman’s sexuality seriously only to the extent that she falls within the confines of the recognisable sex object. It’s for this reason that Rae’s frank and funny descriptions of her own sexual escapades are so welcome – they describe her relationship with her own sexuality on her own terms.

Ordinarily the film and TV industry seem incapable of seeing a larger woman as sexually desirable, so her desires must be relegated to the realm of slapstick. Failing that, she’s often rendered ‘masculine’ or a-sexual. In fact, larger female characters are just as likely to be played by men as women. Look at Big Momma’s House, Hairspray, Jack and Jill, Norbit… I have no problem with actors gender-bending. But when larger female characters are played by skinny men for comedy, reducing the image of larger women to adolescent snigger-fodder, it’s clearly problematic.

The picture is a still promoting My Mad Fat Diary Season 2 on Channel 4 and is taken from the series official Facebook page. It depicts a group of young people on the bus.