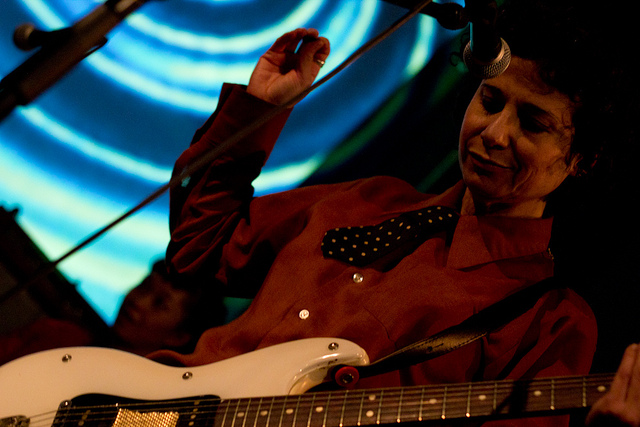 Sophie Mayer follows up on her 2011 review of Carla Bozulich’s Evangelista project with an appraisal of Bozulich’s forthcoming album, Boy.

Pop music, historically the music of choice for teenage girls, is often boy-fixated. However, Carla Bozulich’s Boy (released 4 March) is definitely not The Shirelles’ ‘Soldier Boy’ or Avril Lavigne’s ‘Sk8tr Boy’. The singer has described the release as her “pop” album but this is pop by the way of Throbbing Gristle, not the Beatles. ‘One Hard Man’ may have a middle eight that runs “No, no, no” but it’s delivered staccato rather than in a Dawn Penn swoon. Songs like ‘Drowned to the Light’ plunge into PJ Harvey territory; Harvey fans will find these twisted ballads delectable, as will fans of Diamanda Galas’ pop covers album Guilty Guilty Guilty. It’s a similarly tangential take, like a classic Disney villainess playing the princess. Perhaps, in an ideal world, Boy would be the soundtrack to the forthcoming Maleficent, starring Angelina Jolie.

With artists such as Janelle Monae pushing pop in epic directions, musically and lyrically, the time seems right for Bozulich to do the same. While Monae, Lady Gaga and others have drawn on the performance art/sound installation universe to inform their genre-bending sound, Bozulich actually comes from that scene, making a series of site-specific large-scale performances under the umbrella name of ‘Eyes For Ears‘. Boy could be heard as a follow-up to 2000’s event ‘Fake Party’ – “new music dressed up like a party, meets a social event disguised as art,” in the artist’s words – at which Bozulich lip-synched to old pop songs for the assembled guests…

Carla Bozulich onstage at the Constellation fifteenth anniversary event, 24 November 2012. She looks down at her guitar with a slight smile and a look of concentration. Her right hand is raised and the microphone is level with the top of her head. She wears a dark orange shirt with a short dark brown tie with yellow dots. By UT Connewitz, shared under a Creative Commons License.