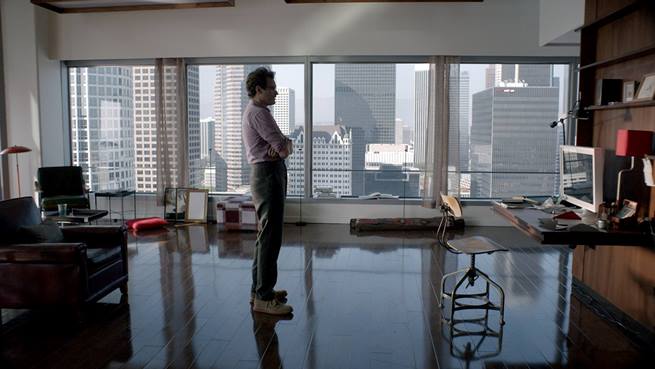 It’s not about her

In the beginning of March cyber romance Her won Best Original Screenplay at the Oscars, with Spike Jonze at the helm as writer/producer/director. In the film, Theodore Twombly (Joaquin Phoenix) is employed by beautiful-handwritten-letters.com and spends his days writing other people’s love letters, the irony of course being that he himself is a lonely character who’s struggling to sign his divorce papers. As his job suggests, he inhabits a world (set in the near future) in which emotions are increasingly artificial and outsourced. It’s only when Theodore purchases an advanced operating system called Samantha (voiced by Scarlett Johansson) that he opens up to life’s possibilities. The film traces their romantic entanglement as Samantha’s ‘personality’ develops, throwing up unforeseen complications.

This is Jonze’s first fiction feature since the bittersweet Where the Wild Things Are (I’ll pretend his writer/producer credit on Jackass Presents: Bad Grandpa didn’t happen), so he’s no stranger to taking a quirky storyline and injecting some heart. As his 1999 debut feature Being John Malkovich shows, he’s capable of balancing dark comedy with surreal tragedy in a complex psychoanalytic love story. In many ways Her deals with very similar themes – loneliness, disconnect, the thrill of inhabiting someone’s mind, the body as a conduit for emotions and physical versus emotional desire.

In the safe hands of cinematographer Hoyte van Hoytema (The Fighter, Tinker Tailor Soldier Spy and the upcoming Interstellar) the film looks beautiful, set in a glowing futuristic city that’s a composite of Shanghai and LA. Hoytema has spoken about his attempts to mirror the romance of the film with soft textures, low lighting and an abundance of lens flares, aimed at blending the futuristic with the nostalgic. But here’s the problem – the cinematography is attempting to echo a warmth and intimacy between the characters that simply isn’t there.

To start with, she’s his. He buys her

The fact that Samantha doesn’t exist beyond or outside of Theodore’s character is emphasised by the fact that, by her very nature, we only see her filtered through her interactions with him. She can never be an autonomous being and gets no screen time that doesn’t involve him. We get no real sense of her as a person outside of their relationship (apart from some vague references to her “OS friends”). The result is an oddly flat, passionless film. Imagine watching someone talk on the telephone for two hours and you’re part way to imagining how difficult it is to create real tension and drama on screen.

This lack of tension is startlingly obvious on the few occasions when Theodore interacts with other characters. This is a film oddly devoid of subplot, possibly because moments in which two corporeal characters interact underscore the lack of interaction in the central storyline. When Theodore meets his ex-wife Catherine (Rooney Mara) to sign their divorce papers, we get a glimpse of the messy and interesting world of their relationship. It is a refreshingly human interaction, highlighting the one-sidedness of much of the film. This is true too of the relationship between Theodore’s neighbours Amy and Charles (Amy Adams, Matt Letscher). Their arguments are tangible, relatable and realistic. 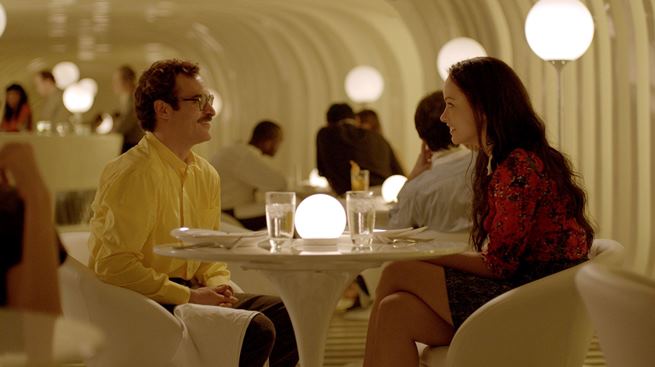 Perhaps this is the point. Perhaps we are supposed to understand the film less as two people struggling to be together and more as one man struggling to interact with the world and hence retreating into himself and his computer. In which case the extent to which Samantha actually ‘exists’ is questionable.

Samantha’s lack of agency within her own relationship is certainly problematic. After an awkward Newsnight interview with Jonze, Emily Maitlis described the film on Twitter as a “sad male fetish fantasy of [a] disembodied female who does his bidding”. She might have a point: in many ways Samantha is the ultimate socially prescribed ‘male’ fantasy. She’s Theodore’s giggly PA, his late-night phone-sex buddy and his therapist. She’s at his beck and call 24/7. Is it any wonder that she’s an attractive option for a man who seems so painfully self-involved? In fact, despite not having a body, Samantha can be seen as the ultimate sex object. Of course she’s not a traditional screen siren; we never see her to be able to subject her to visual objectification. But, to start with at least, she’s his. He buys her.

Samantha’s lack of body doesn’t prevent Jonze from indulging in a couple of spectacularly unrealistic sex scenes. Just imagining Theodore rummaging about in her metaphysical pants for 30 seconds has Samantha moaning in ecstasy. It’s hardly surprising that Theodore’s such a fan of her if that’s all the effort it takes. Awkward sex scene number two does at least see Samantha attempting to live-out her own sexual fantasies and communicate her desires to Theodore through the use of a surrogate sex partner. But then, are they her sexual fantasies or sexual fantasies predicated on his tastes as gleaned from his settings, browser history and personal emails? And while sex surrogacy is supposedly an altruistic act by a woman who just wants to assist two people in their relationship, could it not also be seen as a ‘real’ woman employed as a silent conduit for one man’s sexual pleasure with a machine?

Perhaps Samantha does develop an advanced ‘personality’ that enables her to operate on a different intellectual plane and ultimately outgrow Theodore. But because we never get to hear her speak to anyone without him present we have a hard time imagining her as a three-dimensional character. In fact, as the relationship is entirely filtered through Theodore’s eyes and is perhaps just a mechanism through which he finds closure with his ex-wife, I did wonder whether or not Samantha’s entire character was a cinematic tool for Theodore’s voyage of self-discovery. In that case, Her is basically a two-hour epic in navel-gazing.

Her? Don’t be fooled. This is all about him.

The pictures are from the film’s official Facebook fanpage and may be protected by copyright. First image is of Joaquin Phoenix as Theodore, alone in the middle of his spacious flat. Second image is of him and Olivia Wilde, on a blind date seated at the restaurant table.