The magic of Red Pig Flower

I first encountered the enigmatically named Red Pig Flower a few years ago at an art festival where she was crouched on top of a huge roll of paper. She was bare-footed, dressed in red and black with a large red flower in her hair, painting with her hands. I recall watching her for a moment and thinking how innocently happy she appeared, with her splattered legs and selection of colours in disarray around her. Almost three years on, I encounter Red (the name she goes by), again, this time dressed in more black than red, with long, plaited, dyed red hair and the same flower in her hair. As I approach her, she produces a vial filled with coloured liquid. She says it’s a magic potion; if I buy it from her, it’ll make my dreams come true.

I arrange to talk to Red Pig Flower over the phone after our second encounter (at Tobacco Dock, part of Winter Pride) and she explains her work to me. “I like to open up the real world up to find magic within it,” she says. “I like to find wonderlands where things can be exciting and special and where dreams can come true.” Through her potions (part of her exhibit for Winter Pride and now for Office Sessions at East India Dock), she hopes to portray the potential of art: to look at the magic art can create and inspire. She explains: “A person can buy a painting and it can fix something in their life. It can make them happy if they are sad. It can give them inspiration, a new way to look at something… Art is like a magic potion sometimes.”

Red Pig Flower is part of the youngest generation of artists in London. Hailing from a time unaffected (compared to previous artist generations) by any type of social disquiet, war or significant youth rebellion, such as punk – from a time defined by social networking, consumerism and multiculturalism – Red strives not to protest, but, rather, to find some emblem of intrigue, magic, fantasy and unknown in a world where every question can be answered by Google. When describing her work and her aims, Red explains that her ideas stem from her own imagination, in which she conjures a “wonderland”. She draws this out in her artwork, “dragging it through her own experiences in reality,” showing viewers the possibilities and potentials of where imagination can take you: “It makes the world less boring and less difficult and much more exciting.”

I want to prolong good things in my life. The innocence of childhood, magic…

Red’s artwork attempts to teach viewers to be free and open-minded and to explore a childlike side of their own imagination and creativity. As part of her current exhibition, alongside her potion-selling performance, Red also exhibits a flying boat suspended in the air, made using hundreds of empty bottles. “The boat is the outcome of the potions,” she explains. “Once the potions are consumed – once the viewer’s disbelief is suspended – the boat is able to fly! The belief has created the magic!”

Set against the stark backdrop of a pallid office building interior, Red’s installation and performance come alive, like an apparition; her work appears like a glitch, tearing open reality and revealing a strange fantasy world beneath. In Magic Potions, Red appears completely composed and fully in character; her gaze is unfaltering and quite unnerving. She is a natural performer. Her presence is somewhat more striking and captivating than the flying boat sculpture, but, under harsh lighting, glistening like glass, the latter does still succeed in its intentions, elevating a mundane material (discarded plastic bottles) to the height of magic and possibility. 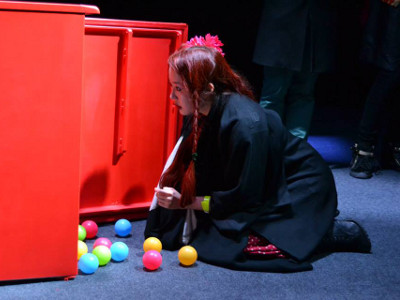 “I want to prolong good things in my life. The innocence of childhood, magic…” Red explains. “That’s what wonderland is. It’s a place where things that are usually vulnerable to time, become prolonged for infinity and become indestructible.” In another series by Red, Receipt Project, treasured time spent with friends is immortalised in receipt form. A secondary theme and by-product of this series is an exploration of value: the value of time and the value of herself as a person. Equally, in Magic Potions, value is a central theme. Red’s magical services – her transformation of the world into a wonderland – comes at a price: the potions are sold, not given for free, and Red’s position in the act is that of a saleswoman.

She is an object in her world, as much as her art is

Red tells me a little of her past and explains that she used to work as a fortune-teller in Tokyo. “People bought my time and my services. A lot of them would tell me their secrets during the fortune telling session, too, as if they had purchased me as a confident or friend.” This unusual background informs Red’s artwork greatly. Rather than looking at the objectification of women in a sexualised way, as many artists do, Red focuses on the objectification and purchase of something equally as precious as her sexuality: her time and her imagination. 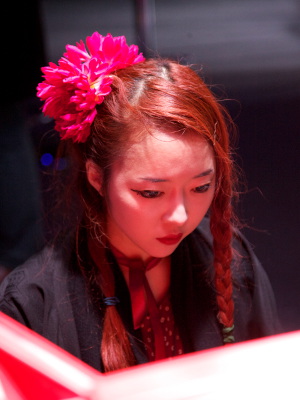 Putting sometimes tongue-in-cheek prices on her artwork and/or incorporating a sales element into a performance trivialises and pokes fun at sexuality, death, imagination, longing and dreaming and makes these otherwise deep and meaningful themes commodities to sell and objectify. In each artwork is a piece of Red Pig Flower to buy. She is an object in her world as much as her art is; “the consumerist world dresses us in material things that, eventually, turn us into objects to consume, too.”

In Office Sessions, Red Pig Flower stands out as having a distinct and confident voice. Her performance is strange, memorable and chillingly entrancing and her concepts extraordinarily innocent and honest. Her work exists in a fine balance between pessimism and optimism, falsity and magic: the way that the balance tips all depends on how far the viewer will allow their disbelief to be suspended. On the magic potions, Red says: “These vials are either potions that can make your greatest desires, realities, or…they are simply just bottles filled with coloured water. It’s up to you.” Amongst a full roster of other emerging talent, Red Pig Flower is certainly one to make a trip to see. There is the possibility, too, that she might even make your dreams come true.

Office Sessions is to the public every Thursday evening from 7pm until 9pm and by appointment until 13 March. Contact Yvette Blackwood or Simon Tarrant for further info: [email protected] [email protected]

Photo 1: The interior of a box holding a number of glass vials with colourful liquid contents and cork stoppers.

Photo 2: A woman in a black robe kneels on the floor, peering into a large crate. Colourful plastic balls are coming out of it onto the floor.

Photo 3: A woman with a large pink flower in her hair looks pensively into a box.

Mia Hull is an artist, writer and mentor living and working in London