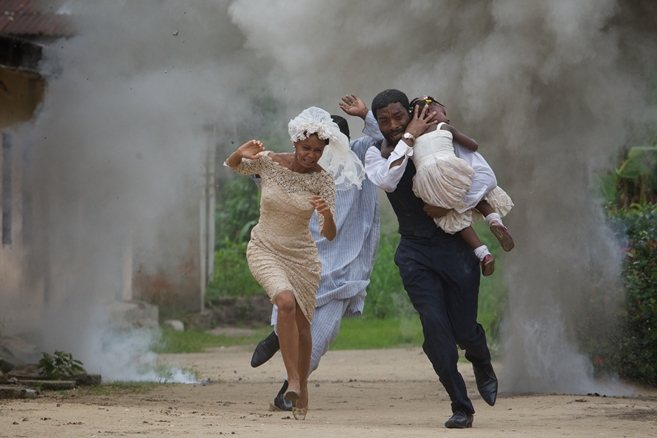 Under half of a yellow sun

In preparation for this film review, I powered through Chimamanda Ngozi Adichie’s amazing novel of the same name in about four days. I had neglected to read this highly praised Orange Prize winning book when it was originally released in 2006. More fool I. Half of a Yellow Sun, as confirmed by endless glowing reviews, is wonderful. Adichie’s rich characterisations and keenly observed interpersonal relationships unfold around the Nigerian-Biafran war, beautifully capturing the immediacy of its horrors and the terrible weight of the series of unending personal tragedies, intelligently juxtaposed with the more quotidian conflicts that arise among educated middle-class intellectuals.

With such powerful source material, I had high hopes for the film – Adichie does not shy away from depicting the costs of war or the intricate politics and ideals involved. Her book is peopled with rich, complicated women with equally complicated relationships. Director and screenwriter Biyi Bandele seemed the ideal person to adapt and direct: though this is his first feature length film, he is an experienced theatre director (working with the RSC and Royal Court) and has previously adapted novels for performance, including Chinua Achebe’s Things Fall Apart. Bandele largely succeeds in translating the characters and much of the mood to the film – the casting is inspired and the filmography and artistic design are exceptional and used to great effect. However, in trying to keep pace with the plot of the book, the film feels rushed and loses some of the former’s emotional impact.

The film begins in Lagos in the early 1960s, at the time of Nigeria gaining its independence from Britain. We meet twin sisters Olanna (Thandie Newton) and Kainene (Anika Noni Rose), upper-middle-class Igbo Nigerians educated in the UK. Kainene is at the point of taking charge of part of the family’s business and Olanna is about to join her “revolutionary lover”, as Kainene calls Odenigbo (Chiwetel Ejiofor), in Nsukka, where they both teach. Kainene gains a lover herself, in the form of British expat Richard (Joseph Mawle), a writer who also lives in Nsukka.

As the ’60s progress, amidst increasing racial and tribal tensions in Nigeria, we see the characters’ relationships evolve. Odenigbo, an intellectual who hosts salon-type evenings with Olanna, has a superstitious mother, Mama (Onyeka Onwenu), who fears Olanna is some kind of witch and contrives to alienate her. Exploiting Odenigbo’s weakness for alcohol, she encourages a liaison with village girl Amala (Susan Wokoma), whom he impregnates. Amala refuses to touch Odenigbo’s child after it is born and Olanna decides to adopt her. Olanna herself has a liaison with Richard. Kainene learns of the affair, which causes a serious rift between two women, though she remains in a relationship with Richard.

Finally, the ethnic tensions in the new Nigerian government result in a military coup and an outbreak of attacks on the Igbo people, targeted because of their (perceived and actual) historical positions of power in society and government. After the secession of Biafra, an Eastern region of Nigeria largely peopled by Igbo groups, Olanna, Kainene, Odenigbo and Richard remain loyal to the province. As the war continues, the Nigerian troops press into Biafra and drive Olanna and Odenigbo further into the interior. Random air raids and attacking troops slaughter many family and friends, while hunger and untreated disease do slower yet equally fatal work. The film finishes with the end of the war and the survivors struggling to return to a semblance of the life they had. 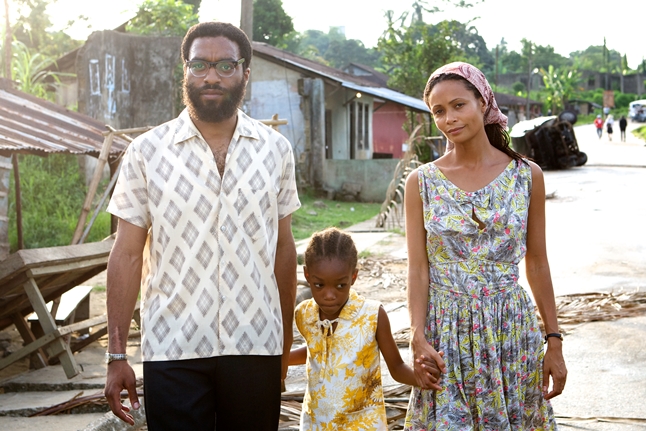 If that sounds like a lot to cover in two hours, it is. Although the performances are spot on across the board, the script feels bitty even as it skips over some of the novel’s subplots. The actors play the emotional beats from the novel, but the story in the film isn’t sufficient to link those performances. The drama of upper-middle-class intellectuals that descends into the endless tragedy of war never attains quite the emotional impact it should: there isn’t time to feel it. The film jumps rapidly from scene to scene through the timeline of the novel, without catching the long term effects of the events, the ever failing hope or the increasing strain of grief.

Each scene in and of itself is well-paced and effective. Many moments are shocking and powerful, serving as postcard picture of the brutality of war, such as the scene where Olanna witnesses the attack at her aunt’s village. Alas, there isn’t a sense of connection between the scenes over the course of the film; everything feels brushed over. No relationship or character really shows the impact of the ever-increasing series of misfortunes. Events happen and the characters hurt, but we don’t see the aging and evolving of that hurt and we don’t feel the building of pain upon pain or the evolution of their relationships in the context of that pain as we do in the novel. It seems the film is trying so hard to keep pace with the plot that it forgets to connect us with it.

The casting is excellent and the actors often add to the novel’s already sharp characterisation. The women are utter stars – in particular, Onyeka Onwenu, as Mama, gives authority and intensity to a rather unsympathetic character in the book. Anika Noni Rose is revelatory as Kainene, adding sultriness to her knowing, wry coolness and Thandie Newton gives Olanna a grit and spikiness. The male performances are also impressive, though less well developed in the script (how gratifying to be noting the gender this way around!). Chitwetel Ejiofor is magnetic as Odenigbo, but struggles with a script that makes much about him repetitive – his drinking is oversold and his kissing and apologising feel quite same-y. Joseph Mawle is note-perfect as Richard, capturing the wateriness evident in the novel, while adding a surprising sexual electricity.

We can watch the ten o’clock news, tsk at Putin or Syria and then go to bed but this film reminds us of the subjectivity of the victims reduced to numbers in news reports

The script maintains the rich characterization of the women found in the novel. While many films use women as mere symbols and tropes in tragedy (things the men lose, win or save), every woman appearing in this film feels whole, however small the role. It is also nice to see the white/western perspective (part of the default film perspective much as the male gaze is) cleverly noted and exploited. Black and white British newsreel-style segments, used in part to address the evolution of the war in the news cycle, acknowledge and enforce the distance of the audience from the events. Every sudden return to the character’s perspective in violent scenes is a sucker-punch to the audience, increasing the shock and horror while also commenting on that distance. Living in the UK, we can watch the ten o’clock news, tsk at Putin or Syria and then go to bed but this film reminds us of the subjectivity of the victims reduced to numbers in news reports.

The soundtrack is at times heavy-handed, perhaps trying to compensate for the lack of emotional development in the plot, and there is a fair bit of “traveling by map” graphics, which assumes, probably rightly, that the average audience member has no idea where Nigeria’s various towns and villages are. However, I would argue that knowing if the war is moving East or West is, in terms of comprehending the story, irrelevant. It is clear that the Nigerian army advances and that Olanna et al. are continually fleeing further from the fighting; all the graphics do is distract and distance the audience from the world of the film, without using that distance to editorial effect as the newsreel segments do.

I really wanted to love this film, but its briskness has left me appreciating and admiring it piecemeal. The acting is superlative and the set, scenes and set pieces are great, but the film is hamstrung by the fact that is doesn’t hang together. Perhaps it would have worked better as two films – two hours to develop the interpersonal drama and lead up to the war and two hours to show the conflict and attendant pains and desperation. As it is, Half of a Yellow Sun feels more like an illustration of various scenes in the novel, relying heavily on its emotional intimacy and a knowledge of the events, rather than a piece that can stand alone.

Half of a Yellow Sun opens in UK cinemas on 11 April, released by Soda Pictures.

Images are stills from the film, courtesy of Soda Pictures.

Katherine works in television production and directs film and theatre. Find her on twitter @k8films