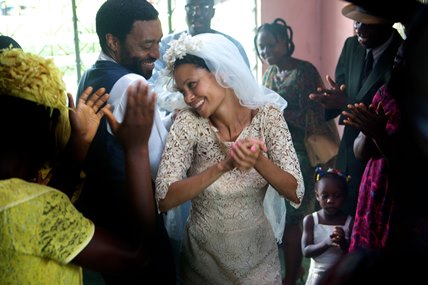 New review: Half of a Yellow Sun

The Baileys Women’s Fiction Prize shortlist got unveiled earlier this week and Nigerian writer Chimamanda Ngozi Adichie’s third novel Americanah is one of the candidates for the prize.

If you have never heard of Chimamanda Ngozi Adichie, her TEDx Euston talk from April 2013 is a good place to start.

The author won the prize previously, in 2007 (when it was called Orange Prize for Fiction) for her second novel Half of a Yellow Sun and its screen adaptation opens in UK cinemas on Friday.

The film, directed by Biyi Bandele, starts Thandie Newton and Chiwetel Ejiofor. Our regular contributor Katherine Wootton reviews it for us, especially praising the performances:

The casting is excellent and the actors often add to the novel’s already sharp characterisation. The women are utter stars – in particular, Onyeka Onwenu, as Mama, gives authority and intensity to a rather unsympathetic character in the book. Anika Noni Rose is revelatory as Kainene, adding sultriness to her knowing, wry coolness and Thandie Newton gives Olanna a grit and spikiness. The male performances are also impressive, though less well developed in the script (how gratifying to be noting the gender this way around!)