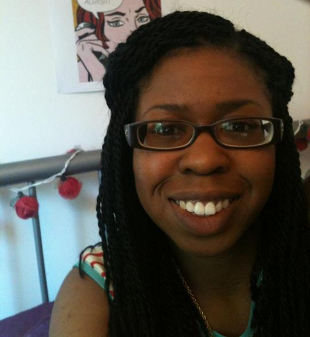 We’re going to be joined by some new permanent F-Word bloggers over the next few months and I’d like to introduce you to one of them. Meet Stephanie Phillips! Stephanie will be blogging once a month and her first post will be about self care in the music industry. You may already know of her through her brilliant blog Don’t Dance Her Down Boys, where she shares her love of female musicians and female fronted bands. She is also currently involved in London-based punk band My Therapist Says Hot Damn and black feminist punk band, Big Joanie, who will be supporting Madame So at The Finsbury pub in London on 27 June. Along with this, she co-runs the South London-based riot grrrl club night Bloody Ice Cream.

Here’s an excerpt from Stephanie’s article for Collapse Board about racism in punk:

…After seeing an advert for a new band night I’ve decided to get together with a friend and start an all-black punk band. We expect criticism, derision and name-calling. Hell, we even got a bit of the reverse race card before we even did our first practice. The reverse race card is a well-used tool in the white supremacist box, whipped out whenever said supremacist feels a bit left out of something fun black people are doing. In this case we were advertising for a bassist and specifically for a person of colour. We were accused of being racist and told that if a white man advertised for white bassist that would be seen as racist. Well, yeah it would, and they do. They don’t say it outright but if there’s an advert for a guitarist that likes The Rolling Stones, Oasis and Kings Of Leon, chances are that white male band are gonna find themselves a white male guitarist. We just wanted to be honest and say we are segregating ourselves but only because you did too and we need to get away from you. To recover, to feel free, to feel safe.

Head and shoulders shot of Stephanie with braided hair and glasses. The headboard of a bed with rose covered lights and a pop art picture are in the background.