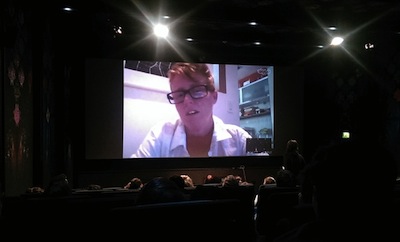 Following her review of The Punk Singer, Sophie Mayer interviewed the director, Sini Anderson, via Skype for The F-Word.

I was lucky to witness another Skype interview with Anderson, on 15 May 2014 at London RichMix, and what I found most striking was her focus on taking action and making your own work rather than investing your time & energy in criticising other women, feminist or not.

First question from the audience came from a young woman who described herself as “British fourth-wave feminist” (in the spirit of the film’s very American penchant for rigorous ‘timeline’ of feminist movement and labelling of subsequent waves) and described her experience of being “disliked” by contemporary “second-wavers”. Anderson answered simply:”I think second wave feminists LOVE fourth wave feminists” and suggested that animosities between the two groups tend to be blown out of proportions or become the sole subject of discussion while the areas of collaboration and agreement are not publicised.

Along similar lines, another person asked whether Anderson considers Courtney Love a feminist. Fans of Kathleen Hanna, and those who watched The Punk Singer, know of Love notoriously punching Hanna in the face backstage at Lollapalooza festival in 1995. Anderson admitted that although punching her friend (Hanna) was definitely not cool, Courtney Love does a great job which she (Anderson) sees as feminist.

Talking about the film, Anderson said it was made out of love and that being friends with Hanna was crucial for the process.

To see what answers Sophie got to her questions, read her interview with Sini Anderson and comment.

The Punk Singer is currently in UK and Irish cinemas and can also be downloaded or streamed, see Dogwoof website for details.

The picture is of Sini Anderson’s face on the screen in the dark cinema, taken on 15 May 2014 at London RichMix, during Skype Q&A after the screening of The Punk Singer. Used with permission.