Birth and ownership: Forest of the Dancing Spirits

Two themes run through Linda Västrik’s Forest of the Dancing Spirits: birth and ownership. The enchanting, moving documentary takes the audience to the Congolese rainforest, observing the Aka people in the compelling narrative of their daily lives. The filmmaker moves between generations, capturing the tests and trials of each, and lets the audience into lives which they would likely not otherwise get to experience.

As the camera travels down the river at the start of the feature, we feel like the thick forest lining is busy with life and death, the business of existing and sustaining and creating.

I thought Forest of the Dancing Spirits might be hard to watch for me as a feminist attachment parent who likes to celebrate evolution, attachment, the imperative maternal role and women’s community. This documentary makes no bones about shattering some of the illusions of idyll and tranquility that native communities are often seen as embodying.

The film begins and ends with a birth story. It opens with a baby being born, delivered by a group of women and overseen from a distance by Akaya, a heavily pregnant woman. “It’ll be your turn next,” one of the attendants reminds her, and she looks on matter-of-factly. The audience is invested. 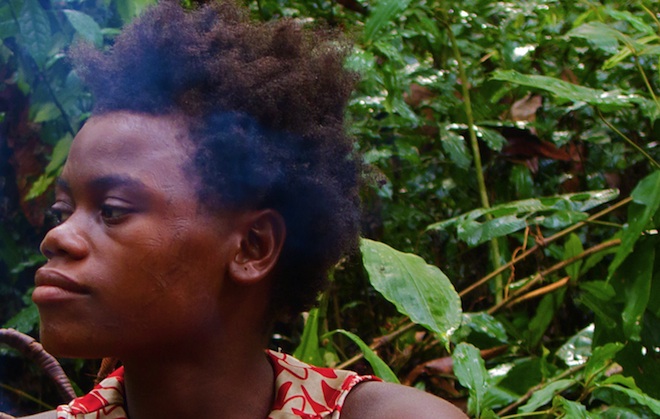 But Akaya’s journey to motherhood isn’t straightforward and this journey remains the central feature of the film’s narrative. As she and her fellow Aka women travel through the film, the audience learns about what it is to be a woman in the forest of the “dancing spirits” – those spirit beings who define and protect the Aka people – and perhaps realises how much more these women know about their own physiological processes than us watching from the ‘developed’ West.

The women are empowered with knowledge of their bodies as well as the birthing and mothering process. They take both life and death for granted but they grieve as they need to as well as celebrate life.

Women grieve together: a community surrounds the mother who has borne the loss

The flow of information between the women empowers them in knowledge of their ante- and postnatal selves and they know an awful lot more about birth than the average woman does here, I’d bet. While that’s not to suggest that a woman’s experience is only valuable if it’s maternal, it’s intriguing to me as? a western woman that one could know so much about birth and have experienced motherhood to such an extent, without actually having children yet.

Contrary to the imagery we have of motherhood, these women are self-sufficient and strong: physically, mentally, emotionally, spiritually and soulfully. 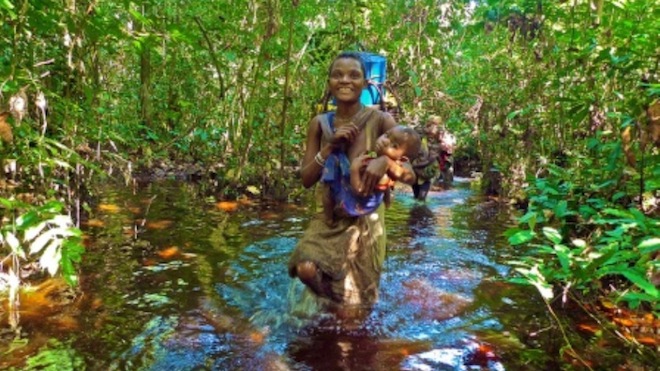 The flipside to this is that women are often held accountable for their own unhappy birth stories. It is believed that there must be a reason, a fault in the woman or some external power, for stillbirth or miscarriage. This results in a public investigative process involving the village doctor.

In such cases, however, women grieve together. A community – perhaps one which we might not consider entirely supportive at times – surrounds the mother who has borne the loss and her sisters know how to treat her both physically and emotionally.

The theme of birth continues and is interwoven with that of ownership, when we see snippets of the young generation becoming increasingly involved in the world outside of the village and the forest, involving money.

The theme of ownership (partly manifested as colonisation, although not always) runs throughout the narrative. The audience shifts from viewing the community in the forest of the dancing spirits as an autonomous collective to seeing them as victims of the legacy of colonisation with vox pops from their “Owners”.

This is a movie about life and sustenance of life, and women play in integral and imperative role in that

We realise quickly that the Owners act as omnipotent overseers of what they regard as their land, upon which the Aka temporarily reside. We feel a sense that the Aka’s right to this land is slipping away, with talk of money and the world beyond the forest.

Violence and control starts to seep into and saturate the audience’s sense that this was ever an ideal existence: a community of women suddenly looks like just another oppressed group. The narrative of solidarity is peppered with hints that the women’s lives and community are endangered.

It could be argued that women are seen as little more than the bearers of children in this context. However, this is a movie about life and sustenance of life and women play in integral and imperative role in that.

The film ends with a sense of hope, because of how we see the main narrative thread wrapping up, but also of sadness that this really is an existence that won’t last much longer, as the forest gets smaller and smaller and the modern world creeps slowly in.

Forest of the Dancing Spirits will have its UK premiere followed by a Q&A on Thursday 12 June at London’s Riverside Studios.

Images are stills from the film, courtesy of DocHouse.

Chrissy D blogs mainly about sexual politics and parenting, usually not at the same time, and can be found on Twitter as @ChrissyDFem