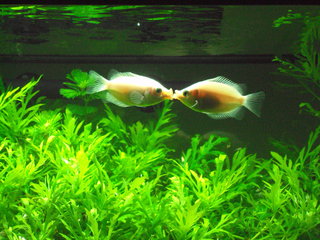 Permission to kiss: consent is simple

The belief that social progress makes life more complicated seems as persistent as it is untrue. On Monday, the BBC News website featured a somewhat disingenuous article by Jo Fidgen entitled, Should you ask someone’s permission to kiss them? The article begins with something of a straw man:

At the trial of Conservative MP Nigel Evans earlier this year, the court was told that he had tried to kiss someone, been rebuffed, and had backed off. This was regarded by the Crown Prosecution Service as potentially criminal. Evans was acquitted.

But the case prompted the question of where we draw the line between a clumsy pass and a sexual offence.

In fact, the young man subject to this unwelcome advance made no complaint and stated that no offence had been committed. The matter would never have been mentioned in court, if there hadn’t been a far more serious case to answer – Evans was accused of rape, as well as other sexual offences. There are plenty of questions raised by the Nigel Evans case, but this isn’t an example of an ill-judged kiss leading someone to the dock.

Fidgen looks to California and a student safety bill that would enshrine the principles of Affirmative Consent on college campuses. Universities in the US have a huge problem with rape, affecting up to one in four undergraduate women. Fidgen explains

The bill says there must be “an affirmative, unambiguous, and conscious decision by each participant to engage in mutually agreed-upon sexual activity”. It goes on to say: “Lack of protest or resistance does not mean consent, nor does silence mean consent.”

It’s generated intense debate on news sites and blogs. Some have speculated that written permission might be needed before sex.

The Californian bill doesn’t represent radical new law, but a clarification of the law as it is. It has long been considered rape to have sex with someone who is unconscious, so incapacitated they can’t give any response or frozen in terror. The statement that neither lack of protest nor silence means consent, merely makes it clear that a rapist can’t argue, “She didn’t object, so I thought she was into it.”

Affirmative Consent is the legal partner of Enthusiastic Consent – it is, of course, impossible to criminalise indifferent sex. Neither are designed to protect anyone from prosecution, but to promote a culture free from sexual assault. Not because everyone has legal consequences at the back of their minds, but because ongoing communication (verbal or otherwise) becomes a necessary condition of having sex. This makes life a lot simpler.

Communication is certainly a necessary condition of good sex. Does anyone mourn the lack of ambiguity in a lover’s responses? (“There’s no mystery! I want to wonder whether he secretly hates it!”) Does anyone wish their partner were less conscious? Good sex requires mutual enthusiasm and is impossible if one person is only participating out of a sense of obligation or is too stoned to truly engage. Good sex does not suddenly change in nature on the whim of one party, when there’s any chance the other party may find the new direction unpleasant or painful. Good sex does not carry on after one party has lost interest. As with sex, so with kissing, cuddling and canoodling of all variety.

Just now, we live in a culture where sex is often talked about as a conquest or, as with the city workers who talk to Fidgen about the threat of “a contract” and “red tape” around kisses, a property transaction. It is often framed as something that one person does to or gives to another, as opposed to something two or more people do together. For many people, getting laid is an essential part of a good night out, getting laid on a regular basis is part of being a worthy human being and we’re often prepared to compromise ourselves to make that happen.

This is a culture easily exploited by rapists; people who see no difference between scoring with someone whose good taste is impaired by alcohol and scoring with someone too drunk to know what’s happening; people who see no difference between trying to cajole someone to sleep with them and simply not taking no for an answer. Fans of Julian Assange are able to argue that what he stands accused of – though unambiguous in either Swedish or UK law – is merely “bad sexual etiquette”.

Yet the vast majority of people manage to get through life, love and sex causing no more damage than the occasional bruised ego. This is partly because we usually do, in fact, ask permission to kiss people. We lean in slowly. We maintain eye contact. We stroke the side of their face. We part our lips. We pucker up. We may or may not say something like, “Can I kiss you?”

And sometimes, the other person smiles politely and shakes their head.

This is the nature of our neo-puritanical age. It’s so damn complicated!

They say manners maketh man. Maybe they could also help keep people out of court.

Discussions of sexual consent are not about keeping anyone out of court. They are about treating others with respect and ultimately, about ending sexual assault.

[Image shows a pair of kissing gourami – two pale peachy-coloured fish in a tank hover, joined at the lips. The photograph is by Justin K, shared on Flickr under a Creative Common’s License.]