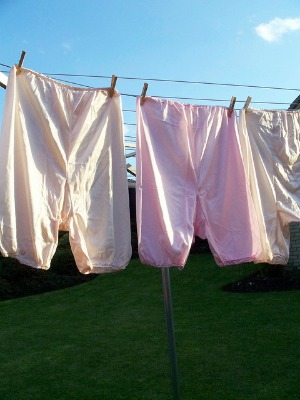 At a recent party, I got talking to a friend about the relative benefits of going sans knickers, panties, undergarments – whatever you wish to call them. She was, in the main, all for it but did draw attention to certain biological factors that perhaps required the protection of a gusset. And no, I won’t go into details on this as I am sure we are all familiar with the practicalities of the female condition. Rather, I am interested in the reasons the majority of us wear knickers every day. Is it for hygiene or is it just learnt behavior? Do we reach for the knicker drawer because it’s what we are taught to do when we could be just as comfortable (if not more so) without? And what does it say about us as women if we choose not to wear knickers? Is there a direct correlation then made about our attitudes to sex?

The relationship we have as women to our knickers/underwear has been going on for centuries. And as always, I must point out that I am writing this article only through my known experience as a European woman. Culturally, I am not aware of undergarments other than my own (!). Prior to the French Revolution, women simply wore heavy skirts with petticoats under their dresses. It was only in the Regency era when pantaloons were invented, that a need to cover up and keep warm was instigated. Early forms of underwear were very long and similar in style to ankle-length men’s trousers. As time went on and fashions changed, so knickers and underwear developed until by the 1970’s ‘no leg’ knickers were born and have continued to be adapted into smaller and smaller versions ever since.

But what are knickers really for? Yes they keep us warm (thongs excluded) and yes they keep us protected (thongs excluded again!) but do we actually need to wear them everyday? I would argue not. And if many of us actually chose not to wear knickers then would we perhaps feel more comfortable and liberated? The sensation of being without pants is one to be celebrated and of course it saves on washing. I have been choosing to wear knickers less and less as time goes on. In fact some weeks I do not wear them at all. And it feels good! Not just because it is my personal preference but I also feel a sense of empowerment. I am choosing this. I am choosing not to wear a piece of clothing that I think is loaded with meaning. If we knowingly choose to walk around with unclothed genitals does this sexualize us more? Are we judged as sexually promiscuous if our vaginas have one less layer covering them? Of course not! Why would this make us any more open to sex than if we were wearing knickers? Ridiculous.

Going commando – and what that means – is an oft told joke. It is a male centric term from army days which has been stretched to include women. Whenever I hear it being used it is usually with a giggle and a whisper behind closed doors. I also discovered when researching this piece, that the act of not wearing underwear in Chile has been called “andar a lo gringo” (to go gringo-style) for decades. Perhaps the Chileans caught on to the fact that not wearing underwear is incredibly comfortable long before we did. And yes, not wearing underwear can be arousing on occasion. But as women isn’t it important to own this arousal without judgment or discrimination? And let’s not forget that not wearing underwear is practical in many ways – particularly if you are conscious of lines showing (although why that should matter I don’t know). Now I have started this piece I can see what a political minefield knickers can be. The VPL debate could be a whole article on its own!

So – mandatory or meaningless? I guess it all comes down to personal choice. What I would like to remove from the decision is any reference to sexual morality or indeed judgment of hygiene. With thrush infections on the increase perhaps not wearing knickers is a health benefit rather than a hindrance. I think I fall part way in between. Some days I want to, some days I don’t. And that is entirely my choice. So let’s think again about what underwear really means to us as women. Protection or privilege – it’s up to you.

Photo shows three pairs of off white bloomers pegged up onto a washing line. Photo taken by Flikr user compresif, used under a Creative Commons Licence.