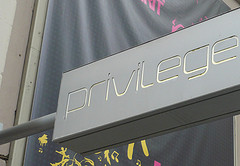 Individual #1: Racial minority, woman brought up in a single-parent household with a deceased Dad, experienced financial hardship as a young child.

Individual #2: British citizen, well-educated, from a loving family, raised in some of the world’s safest areas, no physical impairments, middle-class upbringing.

It’s easy to identify which is the privileged one, yet they both describe the same person: me.

For a long time, I identified more with the first description. While aware of other types of privileges, the predominant in my mind was wealthy white male heterosexual privilege. Consequently, I was on the losing side.

I initially felt anger, but as he was my friend, I thought I’d calmly explain why he was wrong to feel offended. I elaborated by talking about how white male privilege adversely affected my life.

“I’m so sorry to hear about that. I knew before that it’s hard to be a woman and an ethnic minority, and wasn’t trying to say it wasn’t, but I get it now. I am so sorry.”

I felt pride and asked if that helped him understand his privilege.

“Well, I still feel there’s something wrong I didn’t communicate well before. It’s more the way it’s often spoken about,” he replied. “I feel there’s this underlying assumption many have when they speak of the concept. Like that because I experience privilege as a white heterosexual man means I have the overall better life, when that’s not the case.”

He went on to talk about his past. He’d experienced tremendous poverty and abuse growing up. He felt he suffered from depression, but never asked for help due to the stigma he felt as a man he’d receive for it.

It was now my turn to feel shocked. All I’d known was his current situation – in which his family was wealthy – and the image he conveyed: tall, confident, and muscular.

It made me re-consider my belief that because I was less privileged in some ways, I had the worse life. While I lost my Dad at a young age, I lived a safe, stable middle-class upbringing. As a child, my supportive family and education-oriented culture taught me to value academics and family. My friend, on the other hand, suffered from neglect, experiencing brief stints at foster homes and street fighting.

It was like I’d created this mental hierarchy measuring people based on privilege, rich white men and women were further up, and thus had greater lives. When I realised I was more blessed in some ways than my friend, I saw how flawed that logic was. After all, I hadn’t had it easier than him in life overall just because I grew up with love. I’ve battled with emotional health issues, some actually indirectly a result of sexism, racism, and my socioeconomic background.

Yet I also asked for and received mental health treatment because I knew my family would help me. Reflecting on it deeper, I likely also benefited from the fact it’s societally more acceptable for a woman to ask for help than a man.

I realised what my friend was saying: just because you’ve the upper hand in one area of life doesn’t mean you’ve the happier life. Nobody’s immune from pain, no matter her or his gender, race, or wealth. After all, depression and suicide can affect anybody.

My heart softened. I learned an important lesson: if one wants real understanding between the sexes, or even non-white feminists and white feminists- we’ve got to respectfully talk and call somebody out on their privilege. The intention has to be to promote unity rather than separation, which is more likely to occur when one communicates as opposed to aggressively confronts.

In similar past situations, I’d get mad. Why should I “respectfully” educate and listen to him when I feel disrespected? It shouldn’t even be my responsibility as a non-white minority to teach him in the first place.

Yet because of structural racism, the average person isn’t taught about these concepts. I myself didn’t know about white male privilege until university. Is it really productive to get mad at him personally, taking out what is actually my anger at society, for being born into a world that didn’t teach either of us better earlier? Wouldn’t it be more productive to instead respectfully explain it to him and hear him out, given people usually listen when they feel heard?

It turned out it was. That day my privileged white male friend became an advocate for women and racial minorities’ rights, and I became a better human being.

Photo of a grey sign that says Privilege, by Stephen Dann, shared under a Creative Commons license