What can I do about my white privilege?

This week in “Awkward Conversations On My Facebook”: what begins as a humorous post about race takes a turn for the humourless when a white person says to the brown person who began the thread,”Talking about white privilege makes me uncomfortable – what can I do to help?” Stay tuned to find out… 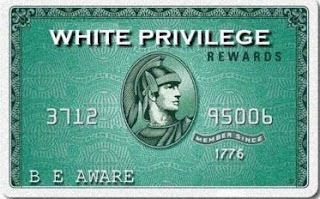 She received many thoughtful answers, for which the main takeaway was “Stop asking what you can DO about it; just be aware of its existence, educate yourself on its impact and use that knowledge to be a respectful human being to all around you.” Unfortunately this white ally was disappointed – she had hoped for a list of specific actions and neither Google nor commenters had come through.

Now, putting aside for a moment that this advice exists outside list form in many corners of the internet, and also putting aside the fact that it is not the job of people of colour to distill information for those who would call themselves allies, I googled the question myself and found just one result: Check My What? On privilege and what we can do about it.

While this resource is excellent and comprehensive it was also written eight years ago, which is practically the dark ages in internet terms. (Was Geocities still a thing back then? Was Hotmail still the email provider of choice?? Was LiveJournal really as popular as I remember it???) I use the internet very differently to how I did in 2006, and I’m guessing all of you do too. I wasn’t even signed up to Facebook, my current activism battleground of choice, until 2007. Reddit was new, Twitter was barely launched, the iPhone hadn’t gone on sale yet and sites like Pinterest, Tumblr and Instagram were twinkles in the eyes of soon-to-be-ridiculously-wealthy developers.

The list from 2006 is still valid, but if you need some specific suggestions of actions to take that will make a positive difference to the lives of people of colour around you, now updated for the newer internet age, here are some to get you started:

I’ve used race to frame this particular discussion, but this advice is of course relevant for any ally whose privilege makes them uncomfortable. Allies, a warning: “What can I do about my privilege?” is by default a derailing question that is one step away from “If You Won’t Educate Me How Can I Learn?” You’re a compassionate human being who just wants to support your friends and their friends, right? That means it’s on you to figure out an appropriate way to ask them how to help ease the discomfort of the privileged. If someone gets annoyed with you for asking, you judged it wrong. That’s also on you. And if you’re getting huffy with me right now for using such ‘alienating’ or ‘divisive’ language, you might not be as much of an ally as you like to think you are.

Right, that’s it from me. TFW commenters, over to you: what recommendations do you have for people who want to offset the impact of their privilege?

The image shows a mocked up American Express credit card, which instead of “American Express” says “White Privilege Rewards, Member Since 1776” belonging to the user “B E AWARE”. Image by EliasSchewel, shared under a Creative Commons licence.