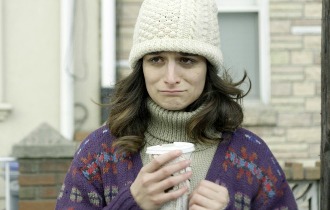 Quite surprising, isn’t it?

The film’s director, Gillian Robespierre, based it on her 2009 short of the same title she had made being disenchanted with… other rom-coms. Robespierre said in 2010:

“After seeing so many films featuring unplanned pregnancies that end in childbirth (Juno, Knocked Up, Waitress, Bella, to name a few), we had become disenchanted with the representation of young women’s experience with becoming pregnant in the media today.

While we have enjoyed these films, we have also been greatly unnerved by the ways in which filmmakers (and our culture more generally) have represented the issue of abortion, making it a silent enemy, a choice not to be made. We’d been waiting to see a film in which a woman makes the other choice- and there’s still a happy ending.”

“In 2014, a film in which a reasonable person with reasonable friends and family has a reasonable abortion (I love that she shaves her legs the night before the procedure, as if it were a date) should seem like an obvious story, a hackneyed sitcom episode we’ve seen before. We haven’t, and that’s what makes Obvious Child important, starting conversations about not only what it covers (Donna’s financial struggles and her emotive quandaries about who to inform and how), but how much farther it could go.”

The picture is still from the film, with Jenny Slate as Donna, looking unhappy and drinking coffee. Taken from Obvious Child UK Facebook page.